The Mission High School and Mission Veterans baseball and softball fields are getting a facelift. By the 2023 season, all four locations will be complete with brand new synthetic turf.

Mission CISD has been working with Javier Hinojosa Engineering to design the new layouts for the diamonds. The board of trustees approved the final designs at the March 9 meeting, and the projects are already out to bid. 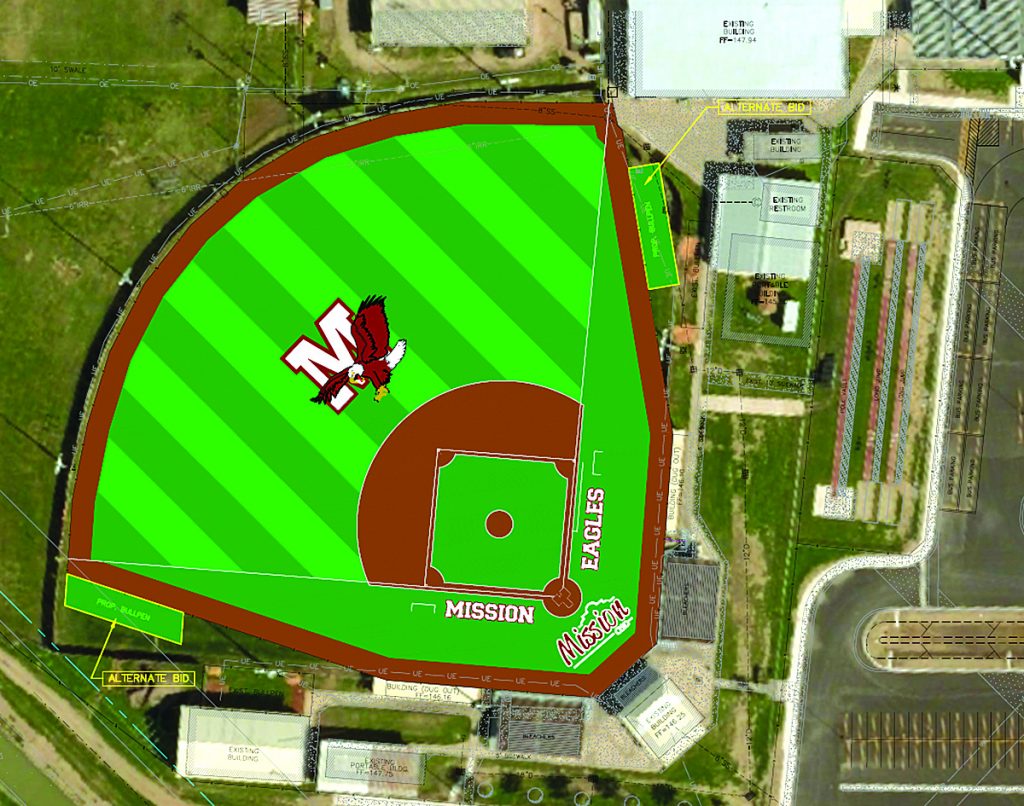 Consulting engineers had several meetings with the coaches and the athletic coordinators to draw up individual designs for the parks. In addition to turf, each field will be decked out in school colors with specific logos and the Mission CISD logo behind home plate.

Both the Eagles and Lady Eagles fields will have their statement “M” with a swooping eagle in center field, and the lettering “Mission” and “Eagles” along the first and third base lines. The Patriots and Lady Patriots center field designs will read “Patriot Baseball” and “Patriot Softball” on their respective fields, including the Veterans Memorial “V” logo.

Depending on cost, the engineers also created alternative designs to include turf in the bullpens, and extra space in foul territory for the MHS baseball field. But the district will not know the estimated costs until MCISD receives bids for construction. The final day to submit competitive sealed proposals is March 31.

Mission is just one district in a growing list opting for synthetic fields, but MCISD already has some experience converting to turf. In 2014, the district installed the artificial grass at Tom Landry Hall of Fame Stadium, complete with the Pro Football Hall of Fame logo honoring the esteemed Dallas Cowboy coach.

Mission CISD resolved to switch to turf baseball and softball fields for multiple reasons, according to Director of Public Relations and Marketing Craig Verley. The benefits of turf include a smoother playing field, which is safer for the athletes, no need for watering and easier preservation. Synthetic fields are also considered lower cost.

“We don’t have a cost on the upkeep available at this time,” Verley said regarding current field maintenance. “The efforts involve a combination of campus and district maintenance staff, along with the athletics department. Upkeep involves year-round mowing, edging, watering, striping, fertilizing, weed control efforts, insecticides/pesticides, general grounds maintenance.”

According to Fort Worth-based contractor General Sports Surfaces, artificial grass starts at around $9 per square foot. High school baseball fields average 7,000 square feet for the infield grass area and 77,000 square feet for the outfield. Foul territory can vary. So although the initial cost for turf might be more, synthetic fields last between 10-15 years before they need replacing, making them cheaper in the long run.

The monies for the baseball and softball field turf projects will come from Mission CISD’s general fund.

“A local, neighboring school district just went out [for bids] for six of their fields and received proposals last week. And using those numbers, I can say that we will be slightly over budget,” Assistant Superintendent for Operations Rick Rivera said. “Again, ours may be totally different. We don’t know the vendor that will bid on it, and we haven’t negotiated, but I can say, using current numbers, we will be a bit over budget.”