This article first appeared in the Jan. 7 issue of the Progress Times. 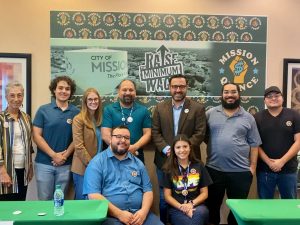 Campaign Manager Abel Prado said a $15 minimum wage is possible without a tax increase, but it is just a matter of “the city making hard decisions about where their priorities are.”

“A budget is a manifestation of an entity’s priorities,” Prado said. “It’s easy to give lip service, saying that we’re trying to take care of everybody or whatever, but show me where you’re spending your money, and then I can tell. That tells me more about what your priorities are as an entity.”

Mayor Armando O’Caña has been vocal about increasing Mission’s minimum wage to $15 since he ran for office in 2018, but city council members repeatedly said it is not possible with the budget.

Council had the option to approve a 4 percent raise for civilians in the current fiscal year but opted for a 3 percent raise to budget for future staff-requested positions. The mayor stated he would have preferred the 4 percent raise.

The approved budget also included a 6 percent raise for the Mission Police Department and a 4 percent increase for Mission Fire.

There is a three-step process to implementing the $15 minimum wage. Mission’s city charter rule allows citizens to use a petition process to enact ordinances into law. In this case, the Mission Quince campaign needs at least 1,860 signatures from Mission citizens in favor of the wage increase. Starting Jan. 5, the campaign staffers have 45 days to collect ink-to-paper signatures, not digital. The city will then verify each signature and decide if there is enough support to enact it into the city charter or put it on the May election ballot.

Prado said about eight staffers will be stationed at various locations throughout Mission, working to acquire the signatures. They will also be contacting people that have expressed interest on social media.

The Texas $7.25 mandatory minimum wage has remained unchanged since 2009, despite the rising cost of living, goods and services. But even though the city of Mission’s minimum wage is higher than the federal and state, Ground Game Texas Executive Director Julie Oliver said there is still room for improvement, which will help the city entirely.

“If you’re giving people more take-home pay, you’re stimulating the economy because they have the ability to go purchase things that they may not have been able to afford before,” said Oliver, who has a background in healthcare finance. “So we just see this all around as a win-win for the city of Mission.”

Other local governments such as San Antonio, Austin and Dallas have increased the minimum wage for their employees. Although changes in city employee pay do not extend to non city-funded entities, the hope is that if Mission makes the change, local businesses will follow suit, which will help retain local talent.

Ground Game Texas has several ballot initiatives throughout the state, but Mission is the first in the Valley Ground Game targeted for the minimum wage campaign. Oliver said they plan to extend the effort to Edinburg, Palmview and Alton throughout 2022.

Since the start of the COVID-19 pandemic, workers throughout the country have been unionizing, demanding increases in pay and staging walk-outs in protest of unfair wages and labor conditions. Oliver said she thinks this is a reaction to people reevaluating how much their time is worth.

“The pandemic limited a lot of what we could be doing — that busyness of our lives,” she said, “And I do think people just took a moment to reflect and say, ‘Is this what I wanna do for the rest of my life? And do I wanna do it for minimum wage? Do I wanna do it for just above minimum wage?’ And I think there are a lot of people who are saying ‘[No], I don’t, and that’s good. That is power.”