It has been two months since the National Butterfly Center in Mission closed its doors to the general public following harassment from right-wing extremists. But the community is just a few weeks away from being able to walk the conservatory’s grounds again. 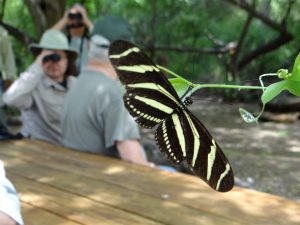 Butterfliers with a Zebra Heliconian

Unproven rumors about the Butterfly Center being a hub for human trafficking spread through radical groups, causing them to threaten the center on social media and in person. The NBC temporarily shut down all operations on Feb. 2 after Director Marianna Treviño Wright received warnings about conspiracy theorists attending a nearby border security rally. The closure came at the request of the North American Butterfly Association board of directors out of concern for the safety of staff and visitors.

Although the wildlife reserve has been open to members only since March 14, the plan is to open to the masses before or on April 23, complete with a ribbon-cutting and celebration.

Director Marianna Treviño Wright said it has been surprisingly very busy at the National Butterfly Center as they gear up to resume full operation. The staff has been undergoing training, the center has had site inspections and they have increased security measures to help meet any challenges that arise in the future.

“Let’s hope there’s never any similar incidents,” the director said, referring to the January events. “But the best advice is always to prepare for the worst and hope for the best. I guess that’s what we’re doing.”

Although Mission PD increased patrols at the center and provided a surveillance tower on site, the NBC will have security guards by opening day. Treviño Wright said finding state-licensed security professionals that were both available and affordable was a challenge and is part of the delay.

“We needed to find consultants who shared our values,” she said, “and that meant finding people who are conservation-minded, aware of the needs of wildlife and nature centers and also prepared to come to a predominantly Hispanic community on the border and treat everyone with respect.”

The director said the Butterfly Center still receives threats on social media, but as far as she is aware, no one has shown up in person, which is likely due in part to the facility’s closure and current entry process. The front gate remains locked, except for when they let members inside. But staff must cross-reference visitors’ names or membership cards with a membership list before entry.

Because the conservatory is not open to the public, visitorship has significantly decreased. According to Treviño Wright, the center usually has 100 to 200 visitors a day during spring break; this year, she said they roughly had about five visitors a day. But she and the staff look forward to reopening safely.

At the March 28 Mission City Council meeting, the NBC director also promoted their yearly summer campout events where visitors can stay the night at the Butterfly Center to participate in night hikes, campfire activities and stargazing. She stressed the importance of community participation, especially this summer.

“We want everyone to come out this year and spend the night at the Butterfly Center, fish on the river, enjoy the hike and bike trails that we’re attached to, Bentsen State Park down the road and really do all that we can,” Treviño Wright said. “This event goes a long way to contradicting the lies that are told about Mission and about borderland communities, about us being dangerous and lawless when we all know that that is false.”