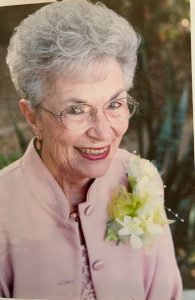 MISSION – Helen Berny Bentsen Reinhardt was born on August 30, 1927, in Edinburg, Texas, and passed into eternity on March 20, 2022, after a lengthy illness.

Her parents were Carl Otto and Lettie Hines Berny. She grew up on a farm and attended school in Edinburg, having graduated in 1945, and then graduated from Edinburg Junior College in 1947.

She worked at the Texas Highway Dept. in Pharr prior to her marriage to Tommy Bentsen on October 6, 1949. In 1965, she began working at First State Bank of Mission for 28-1/2 years before retiring. She was employed afterwards for several years at Mission Shippers in the Gift Fruit Department before retiring a second time.

Helen’s first love was her church, the First United Methodist Church in Mission, and had served in many capacities in the church, mostly noted for being the Church Historian, Money Counter and Secretary of the Friendship Sunday School Class.

She had belonged in prior years to Beta Sigma Phi and the Mission Jr. Service League. She was a member of Chapter EY, P.E.O., former member of McAllen Community Concerts, a member of the Mission Historical Museum, as well as the Friday Book Review Club.

She loved to travel and found joy in making photo albums of each trip. She also loved singing and had belonged to the choir in her church since 1950.

On September 24, 2005, Helen married for a second time to Donald Reinhardt after being associated with him in Sunday School class at church as well as seeing each other at museum meetings, plus a few other things. They both loved to travel and did a lot of that after they married.