The city thanked Dominguez — who joined the Mission Police Department on April 6, 1987 — with a retirement ceremony at the Mission Event Center on Wednesday afternoon.

“Probably some police chiefs won’t like this, but just about anybody can be a police chief,” said former Mission police Chief Leo Longoria, who served with Dominguez for two decades. “But doing it with humility? Doing it with compassion and love? Not every chief has that. But Robert has it.” 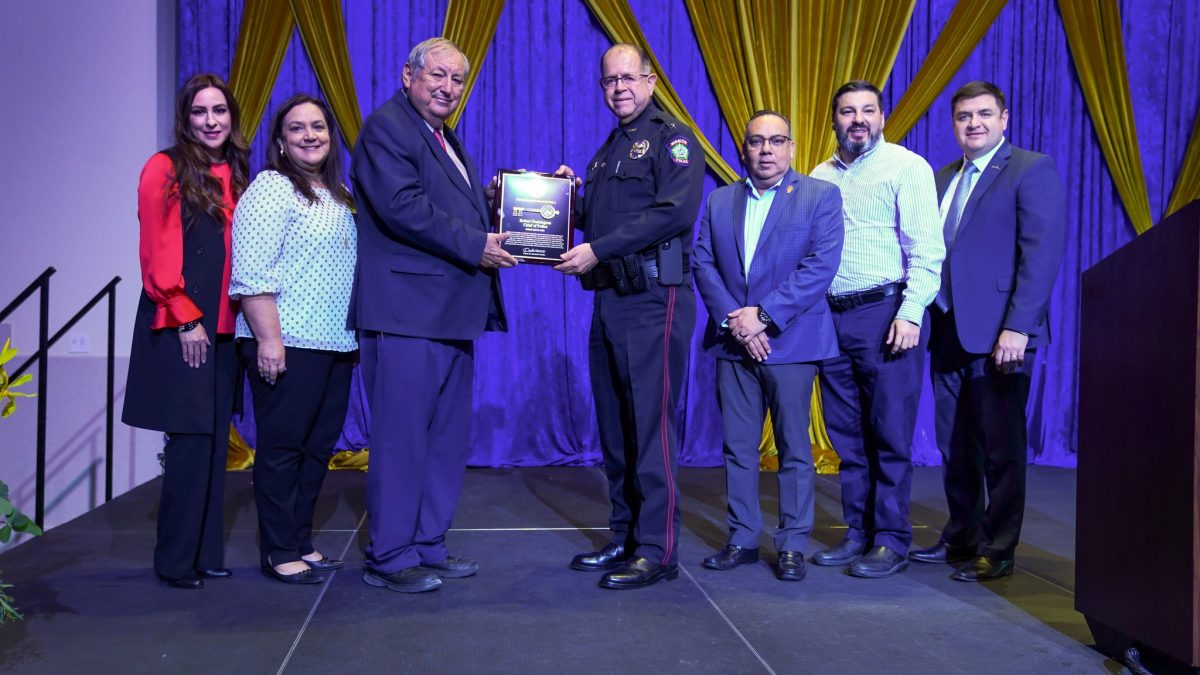 The Mission City Council presented police Chief Robert Dominguez with a key to the city Wednesday, thanking him for 35 years of service. (Photo courtesy of the city of Mission.)

He joined the Mission Police Department less than a year later. The job paid just $7.15 per hour.

“When he was a rookie, I was fire chief of Mission,” said Mayor Armando “Doc” O’caña. “So I met him, and I’ve seen him grow through his 35 years. Professionally, he’s done an excellent job. Personally, he’s a good friend of mine.”

Dominguez rocketed through the ranks.

After a brief stint as sergeant, Dominguez skipped the rank of lieutenant and became the assistant police chief.

“Thanks to his merits and his stellar leadership, he was appointed assistant chief on June 13, 1996,” said City Manager Randy Perez. “He held that position for 17 years.”

Dominguez served under Longoria and police Chief Martin Garza before taking the top job in 2013.

“Chief Robert Dominguez has dedicated his life to public service and laid the foundation so that the department he runs today is recognized as one of the best departments in the region,” O’caña said.

By 2022, when he started preparing for retirement, only two officers had worked for Mission longer than Dominguez, according to Texas Commission on Law Enforcement records.

“It’s not an easy thing to take this step, but we also know that it’s our time,” Dominguez said. “And it’s my time now.”

Mission became his second home — and the city’s 200-odd police officers his children. Dominguez, though, never moved to Mission.

“I have a 35 minute drive to work every day from the metropolis city of Elsa, Texas. I took that time, for the last 35 years, to pray. To pray for my family at home, to pray for my family at work and to pray for my community. The overpass at Shary Road is a very special overpass for me. Every day that I come to work, I see the horizon, the great city of Mission. And I ask my lord, first and foremost, to help me with that day. Whatever comes across my desk. And two, to take care of this community,” Dominguez said. “I will continue to pray for you. But I will miss that overpass every morning.”