Garza is accused of sexually assaulting three students at Camarena Elementary, according to criminal complaints against him.

The first student said Garza touched her inappropriately on Jan. 25, when they watched a movie in the gym, according to a criminal complaint against him. 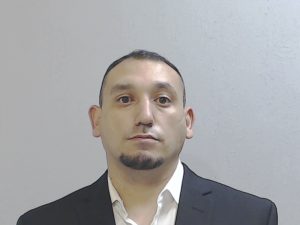 Ricardo Garza, 38, of Mission is charged with five counts of indecency with a child-sexual contact, a second-degree felony. (Photo courtesy of the Hidalgo County Sheriff’s Office.)

The second student and the third student told similar stories.

Both girls said Garza touched them inappropriately in the gym while they watched movies, according to the criminal complaints against him. They didn’t recall the exact dates when the sexual assaults occurred, but the incidents happened at some point between Sept. 8, 2021, and Jan. 26, 2022.

The second and third students reported the sexual assaults in March.

Garza is charged with five counts of indecency with a child-sexual contact, a second-degree felony — one count for each of the five incidents described in the criminal complaints.

After the first arrest, La Joya ISD placed Garza on administrative leave and released a statement.

“We are aware of the incident that has occurred at Camarena Elementary by one of our Physical Education Teachers. Employee was charged and arrested. Proper notifications to affected parties and agencies have been made,” according to the statement. “This is an ongoing investigation and we will not be able to provide further details.”

A spokeswoman for La Joya ISD didn’t respond to follow-up questions after his second arrest.

The school board, however, voted Wednesday not to renew Garza’s contract.