“We are aware of the arrest made regarding one of our police department employees,” according to a statement released by La Joya ISD. “This is an ongoing investigation and we will not be able to provide further details.”

After graduation, Ramirez accepted a job with La Joya ISD. 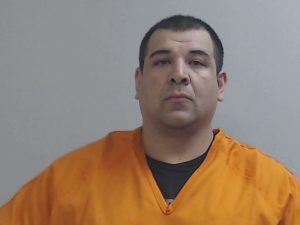 The Progress Times filed a public information request for Ramirez’s personnel records, but La Joya ISD declined to release any documents without a decision from the Texas Attorney General’s Office.

Ramirez also mounted an unsuccessful campaign for Sullivan City Council in 2020, when he ran against Rene “Cuate” Peña for Place 3.

About 42% of voters supported Ramirez, according to results published by the Hidalgo County Elections Department.

During the campaign, signs with Ramirez’s smiling face appeared on fences throughout Sullivan City. A very different photo — Ramirez in orange jail uniform — made the rounds on April 1, when special agents with the Criminal Investigations Division of DPS arrested him on drug charges.

Agents witnessed Ramirez park a blue truck outside the Academy Sports + Outdoors store on Ware Road in McAllen, according to documents released under the Public Information Act. Moments later, a red sedan pulled up.

The driver of the red sedan handed Ramirez a package. Ramirez placed the package in his pocket and drove away.

DPS followed Ramirez and conducted a traffic stop on Shary Road. Agents found three vials of THC oil, 4 ounces of synthetic urine and a .40-caliber Glock pistol in the car.

“RAMIREZ stated that the synthetic urine was for his use when he was drug tested at work,” according to the criminal complaint against him.

Ramirez was booked at 6:46 p.m. on April 1 and released from the Hidalgo County jail at 3 a.m. on April 2 after he posted bond.

If convicted on the felony charge, Ramirez faces 2 to 20 years in prison.