Two Big 7 baseball teams were on the right side of upsets during Bi-district week. Mission, who got into the playoffs at the last possible moment, came through against a district champion and the La Joya Coyotes advanced as a third-seed.

At the beginning of last week the Mission Eagles were fighting for playoff life. Fast forward to bi-district weekend and the Eagles are knocking off 32-6A Champions Los Fresnos. 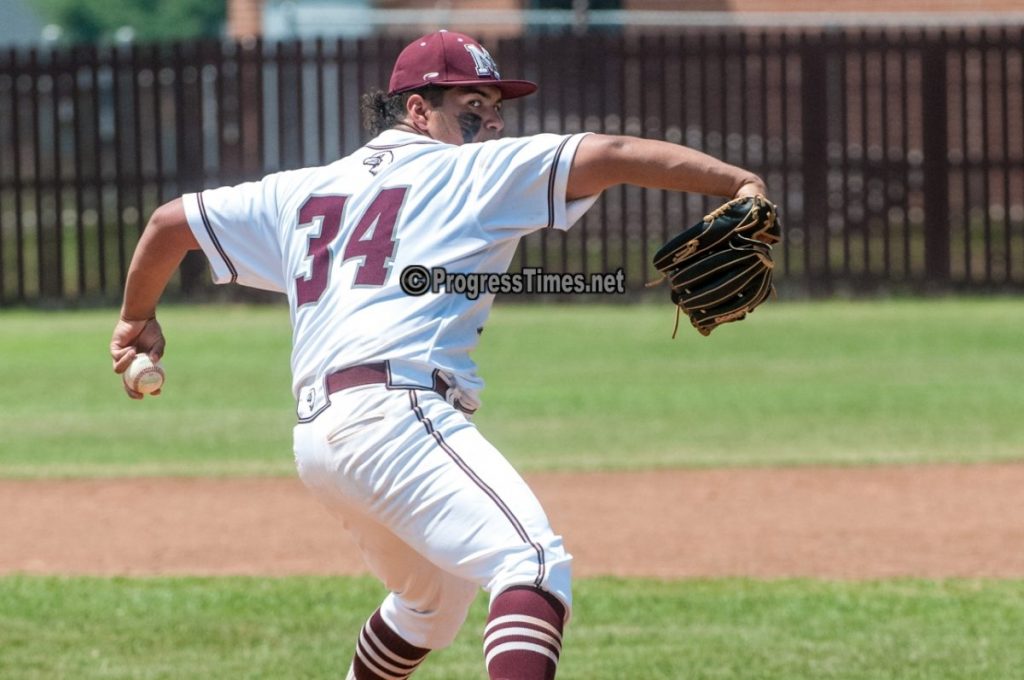 Mission pitcher Jr. Soto pitched the Eagles to an 8-2 Game 2 win over Los Fresnos to help the Eagles win back-to-back games over the Falcons Saturday and take the Bi-district series 2-1. Progress Times photo by Luciano Guerra.

“It was a stressful week for me as a coach but these guys showed no fear and came out and battled,” Mission Coach Leo Salinas said. “Our backs have been against the wall and that’s when our guys have performed.

“It’s all heart,” Salinas said. “These guys are a bunch of guys with a lot of heart. They come to work every single day and they get after it any chance they get on the field. As you can tell they leave it all on the field. I can’t say how proud I am of them.”

Mission got the bats going in a big way on Day 2 at home and outpaced and outscored the Falcons 16-9 over the course of two games.

R.J. Soto won game two and in game three Tony Fuentes was pitching in front of a hot offense. Senior Luis Balderas made Los Fresnos pay for walking two of his teammates, sending a three-run blast over the fence in left-center field.

“We knew we’d have to fight off Game 1 but we knew today if we gassed them out we had a chance to win here today,” Mission senior Luis Balderas said. “We’re just fighters. We knew that if we could get into a play-in game we we’re going to do some damage. We have a tough district and we knew if we could get in we could make a run for sure.”

Soto was called on to pitch in the team’s biggest moments, winning the play-in game Monday, starting playoff games and being used to record the last out on the mound.

“Coming from a three-win season last year it feels good,” Soto said. “We worked hard all this season. We were the underdogs because of last season. It feels good to be upsetting people so people know Mission baseball is the real deal.”

Next up for the Eagles: San Antonio O’Connor who took out Laredo United in Bi-District

The La Joya Coyotes got the bats going early and never looked back in its 13-1 Game 1 win over Weslaco High on the road.

Catcher Jose Gutierrez hit a homer in the second inning to get the scoring started, while Homer Munoz and Eliab Gonzalez were among the players who delivered RBIs with runners in scoring position. 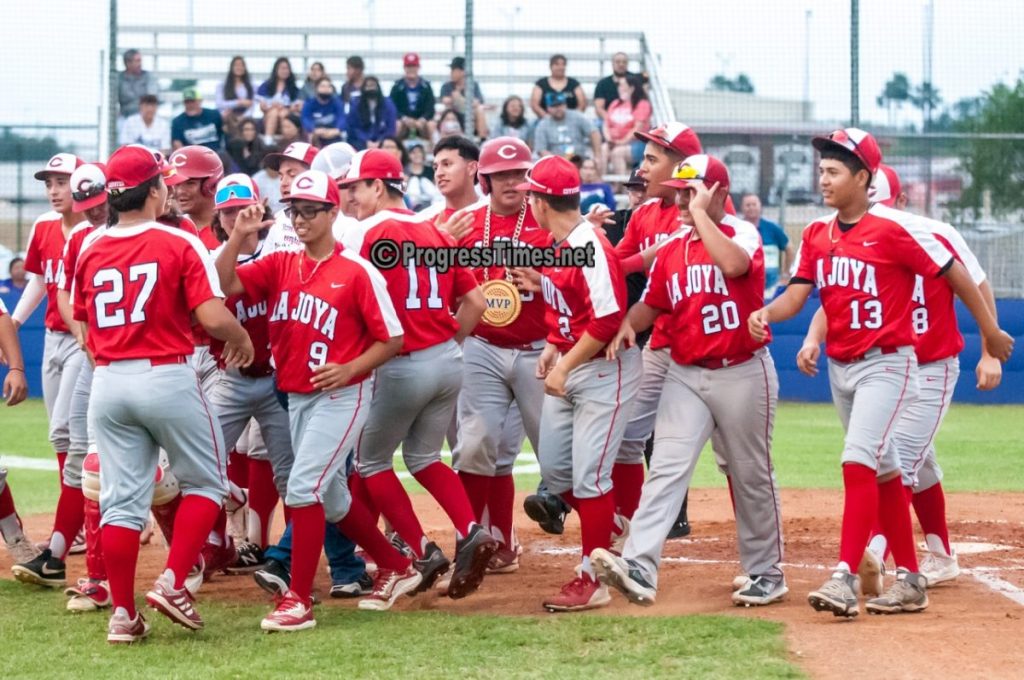 The La Joya Coyotes celebrate a home run by catcher Jose Gutierrez in their 13-1 Game 1 win over the Weslaco Panthers. Progress Times photo by Luciano Guerra.

“It’s just teamwork, it’s how the team has to work to score runs,” Gutierrez said. “We started seeing the scoreboard and it motivated us to keep hitting the ball and not giving up runs.”

La Joya, who finished 3rd in District 31-6A, got comfortable at the plate quickly. The offense was relentless throughout the course of the game. The Coyotes put together four innings of three or more runs.

“I’m happy that what we worked on in practice translated to the game,” Coyotes coach Mario Flores said. “If someone’s on [base] we need to find a way to get them to home plate and we did that tonight.”

On the mound Coyotes starting pitcher J.C. Gutierrez threw 105 pitches in six innings of one-run baseball to keep the Panthers at bay as La Joya continued to score.

La Joya went on to defeat Weslaco 2-1 in Game 2 to secure a spot in the area round. The Coyotes Area Round opponent will be the San Antonio Stevens Falcons.

Sharyland Pioneer had no trouble getting through Brownsville Porter winning the series 2-0 on a combined score of 23-0. Coach Shawn Moes and the Diamondback will now prepare for Corpus Christi Moody who took down Rio Grande City. 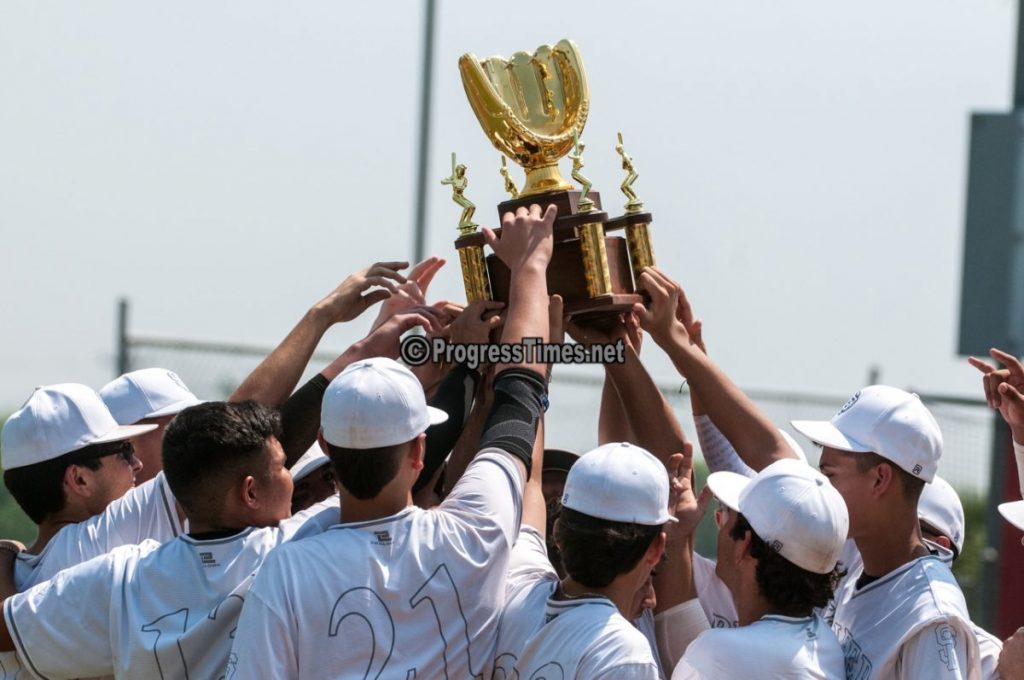 Sharyland High earned a Game 1 win over Brownsville Veterans but the Chargers came back to win two in a row to win the series and advance.

Corpus Christi Veterans and Mission Veterans went head to head but the CC Veterans Eagles were too much to handle as the Patriots were defeated twice in shutouts.