Sharyland ISD employee and parent Meagan Sullivan stood in front of the Board of Trustees on April 25 for one reason — to ask the district to remove or relax the rule regarding hair length for male students.

For Sharyland boys, hair length must pass a three-way test. According to the Student Code of Conduct, the test involves the length of hair not extending below the eyebrows when lightly pulled down, below the earlobes and must not extend below the top of a buttoned-down dress shirt collar.

But Sullivan argues the rule does not consider Black students’ natural hair, which can lay and grow differently than non-Black students. She cited the following passage from the student handbook: “Sharyland ISD’s dress code is established to teach grooming and hygiene, instill discipline and pride, prevent disruption, avoid safety hazards and teach respect for authority and self.”

“As the mom of three Black kids for whom the majority of cultural hairstyles will violate this policy and length,” Sullivan said in her public comment, “I ask if the pride and respect are being instilled in my kids with this policy that doesn’t really consider their natural hair growth pattern, nor historical and cultural hairstyles.” 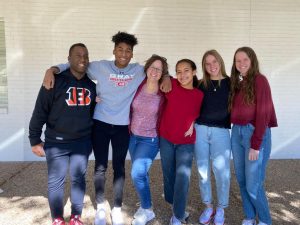 The special education teacher has been an SISD employee since 2006. She’s a single mother of five — two sons and three daughters, all of which attend or have graduated from Sharyland schools. Three of her children are transracially adopted, meaning they are not the same race as Sullivan.

Her youngest son Fenn is a junior at Sharyland High School. He has had to ask for permission from the district to wear his hair in specific styles common in the Black community since he was in sixth grade. Fenn pled his case in front of principals and always had a favorable outcome, which is not always the case for other Black kids in the district, Sullivan said. But she felt the rules have been more lenient for Fenn because he has a mom as a district employee. And that didn’t sit right with her.

Sullivan explained that she wanted to use her voice as a white, well-respected person in the district to argue that the hair rule does not embrace the entirety of the student population.

“In this post-George Floyd era of racial awareness and racial reckoning of what’s fair, what’s unfair; what’s just, what’s unjust, there’s a lot of areas where, as a white person, myself, regardless of my family circumstances…there are times to just shut up and listen, and there are times to stand up and speak and be an ally. And I felt like this is an area where I can say something,” she said in an interview.

During her public comment, Sullivan cited the CROWN Act of 2022, which stands for Creating a Respectful and Open World for Natural Hair. The bill prohibits race-based hair discrimination in the workforce, education and federally assisted programs. Last month the U.S. House passed the bill, but it still needs Senate approval before the president can sign it into law. However, the Sharyland ISD mom of five urged the district to get ahead of the curve and change the dress code before the federal law requirement.

SISD trustees and district leaders have long debated the dress code, and the district recently came under legal fire because of it. Other parents have also spoken out against it. But in the past, trustees have argued the dress code is part of the Sharyland way, which is not a good enough reason for the district to keep it as is, Sullivan said.

“If things are working and we’ve always done it that way, that’s great,” the special ed teacher said. “But when you know better, you do better.”

Sullivan said she received positive feedback for her public comment from her community, including parents and district employees. Her son Fenn was also appreciative.

“It was good to hear what she had to say,” the 17-year-old said. “She works for Sharyland, and it helps. And she’s also white. So, not that it looks better, but it’s from a different race, so everybody sees it’s not just [coming from] the people of color.”

Although the board is not allowed to comment or discuss matters brought up during public comment, Sullivan said she hopes it starts a dialogue to remove or relax the hair length restriction.

“No one on that board has Black children, so I don’t fault them for not thinking about this. I don’t think about things that don’t impact me until they do impact me, or until they impact somebody I care about,” she said. “So I wanted to bring it to their awareness, open the door and let them hopefully make the change.”