A federal indictment unsealed on Tuesday implicated two members of the Edinburg City Council in a bribery scheme.

The indictment charged local politiquero Miguel Angel Garza, 51, of Edinburg with one count of bribery and one count of violating the federal Travel Act by using a phone to carry out the bribery scheme.

Along with Garza, the scheme involved two members of the Edinburg City Council and a businessman.

“Obviously it looks like it’s a part of an ongoing investigation,” said Mayor Ramiro Garza Jr., who isn’t related to Miguel Angel Garza.

To improve transparency and rebuild public trust, Edinburg adopted a code of ethics in March. The City Council also placed “Disclosure of Conflict of Interest” near the top of every meeting agenda.

“The suspicions in our community have been there,” said City Councilman David White. “I think that’s one of the reasons they’ve elected a whole new City Council — starting with my election.” 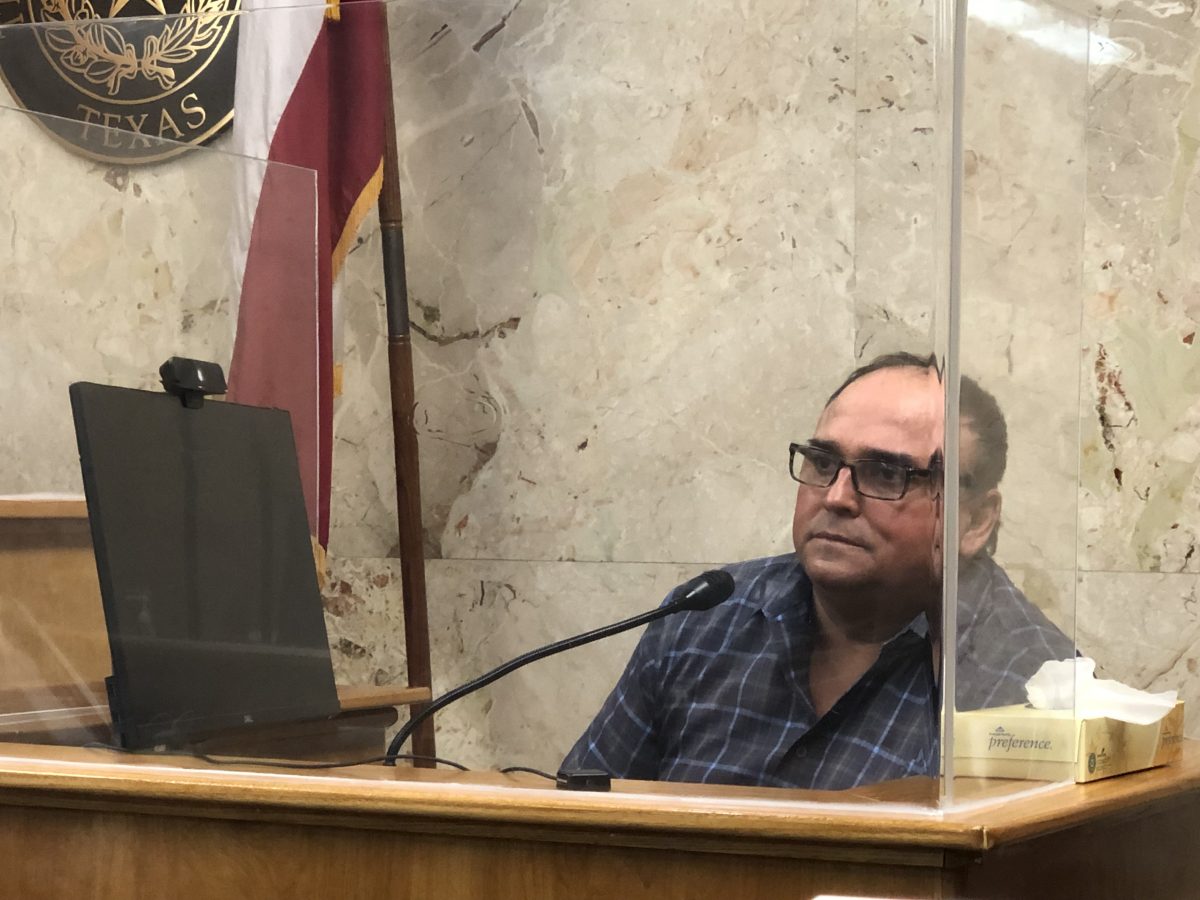 Miguel Angel Garza, 51, of Edinburg in November 2021, when he testified in state district court. (Photo by Dave Hendricks / The Progress Times.)

Miguel Angel Garza worked on political campaigns in Edinburg and throughout Hidalgo County.

“Really what I am, I’m really a politiquero,” Miguel Angel Garza said Tuesday, when he appeared in court. “I help campaigns. I go out there and put the signs and all that.”

Miguel Angel Garza apparently traded on that access to power.

“During the period of time alleged in the indictment, he was — shall we say — consulting on behalf of three businesses with ties to the city of Edinburg,” said Assistant U.S. Attorney Robert Guerra, who is prosecuting the case. “And all three of those businesses were paying him either bi-weekly or monthly. Thousands of dollars, annually.”

Guerra didn’t identify the businesses or reveal how much they paid Miguel Angel Garza. The jobs, though, allowed him to accumulate “substantial” assets.

“He was employed as a consultant, being able to connect people with businesses to public officials so that pitches could be made,” Guerra said. “And that’s not illegal.”

The indictment against Miguel Angel Garza details a bribery scheme that took place from approximately June 2019 to March 2020.

Members of the City Council are the only elected officials in Edinburg with the ability to vote on contracts.

The bribery scheme also involved “Person 1,” who owned a business that operated in Edinburg and the surrounding area.

In November 2021, however, Miguel Angel Garza testified during a hearing on whether or not the Hidalgo County District Attorney’s Office could prosecute former Edinburg Mayor Richard Molina on voter fraud charges.

Miguel Angel Garza admitted the FBI had questioned him about Molina.

“The fact that Mr. Garza was arrested obviously is tragic for Mr. Garza and his family. I wish him well,” said attorney Carlos A. Garcia of Mission, who represents Molina. “But as far as what the prosecutor insinuated, I don’t have anything to offer. I think the record speaks for itself.”

A federal grand jury subpoena the city received in February 2020 may also provide clues about the case.

On Feb. 27, 2020, the city received a subpoena for all “information, communication logs, and directory data, pertaining to e-mail accounts or other communication forms that are stored, preserved or retained on city computers or other physical/remote back-up servers” from January 2019 to February 2020 for seven elected officials and eight city employees.

They aren’t named in the case against Miguel Angel Garza or charged with any crime.

Along with emails, the subpoena requested all records from Edinburg City Council and Edinburg Economic Development Corp. meetings from January 2019 to February 2020 “that are not otherwise publicly available.”

The FBI agent and federal prosecutor who handled the subpoena also worked together on the case against Miguel Angel Garza, according to documents released under the Texas Public Information Act and federal court filings.

Miguel Angel Garza appeared in court by videoconference Tuesday from the East Hidalgo Detention Center in La Villa. Wearing an orange jail uniform and a blue face mask, he pleaded not guilty.

While on pretrial release, Miguel Angel Garza is prohibited from traveling to Mexico, drinking alcohol and working on political campaigns.

Miguel Angel Garza said he had no problem stepping away from campaign work.

“I won’t even get hired no more. Because I already came out in the paper, I came out in the news, everywhere,” Miguel Angel Garza said. “Nobody’s going to want to touch me. But I won’t mess with that.”

If convicted on the bribery charge, Miguel Angel Garza faces a maximum of 10 years in federal prison.