The company had planned to build the warehouse — what Amazon calls a “fulfillment center” — near the intersection of U.S. 83 and North 23rd Street. Amazon, though, apparently killed the project after concluding it already had enough warehouse capacity.

“Basically what we’re getting from Amazon is they’re slowing their growth on warehousing and putting a lot of projects on hold,” said Mike Perez, the executive director of the Peñitas Tax Increment Reinvestment Zone, which partners with landowners to spur development.

Asked if the project had been canceled, Amazon released a statement.

“Amazon is constantly exploring new locations and weighing a variety of factors when deciding where to develop sites to best serve our customers,” according to a statement released by an Amazon spokesman. “However, we have a policy of not commenting on our future roadmap.” 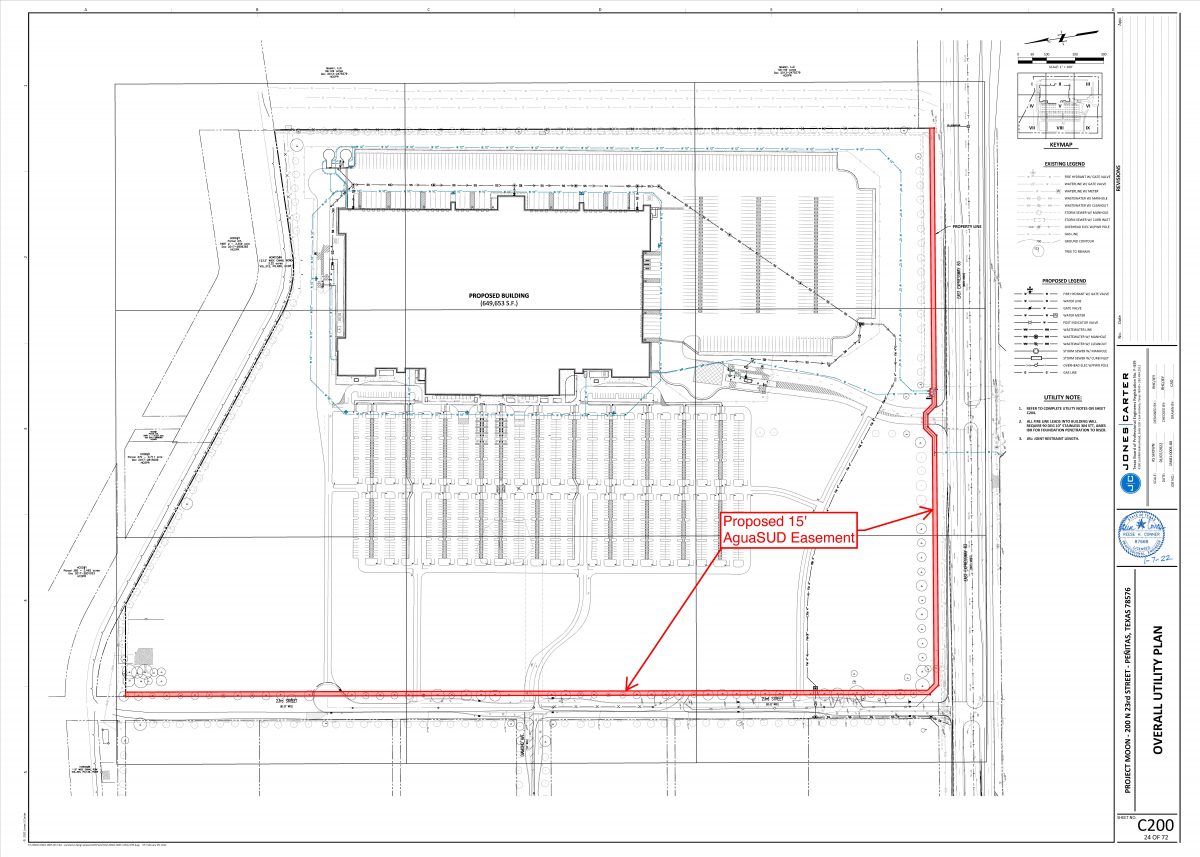 A utility plan for the proposed Amazon fulfillment center in Peñitas. (Image released by Agua SUD under the Texas Public Information Act.)

Amazon planned to build the warehouse on 114 acres owned by Mil Encinos Development. Located north of U.S. 83 and west of the La Joya bypass, which remains under construction, the property is perfect for a fulfillment center.

Quiddity, however, sent the Agua Special Utility District a “site concept” and other documents as part of the development process.

The documents show a nearly 650,000-square-foot building with a large parking lot on the west side and a loading area for trucks on the east side. In the site concept, the building is labeled: “PROPOSED AR SORTABLE MULTI-STORY.” 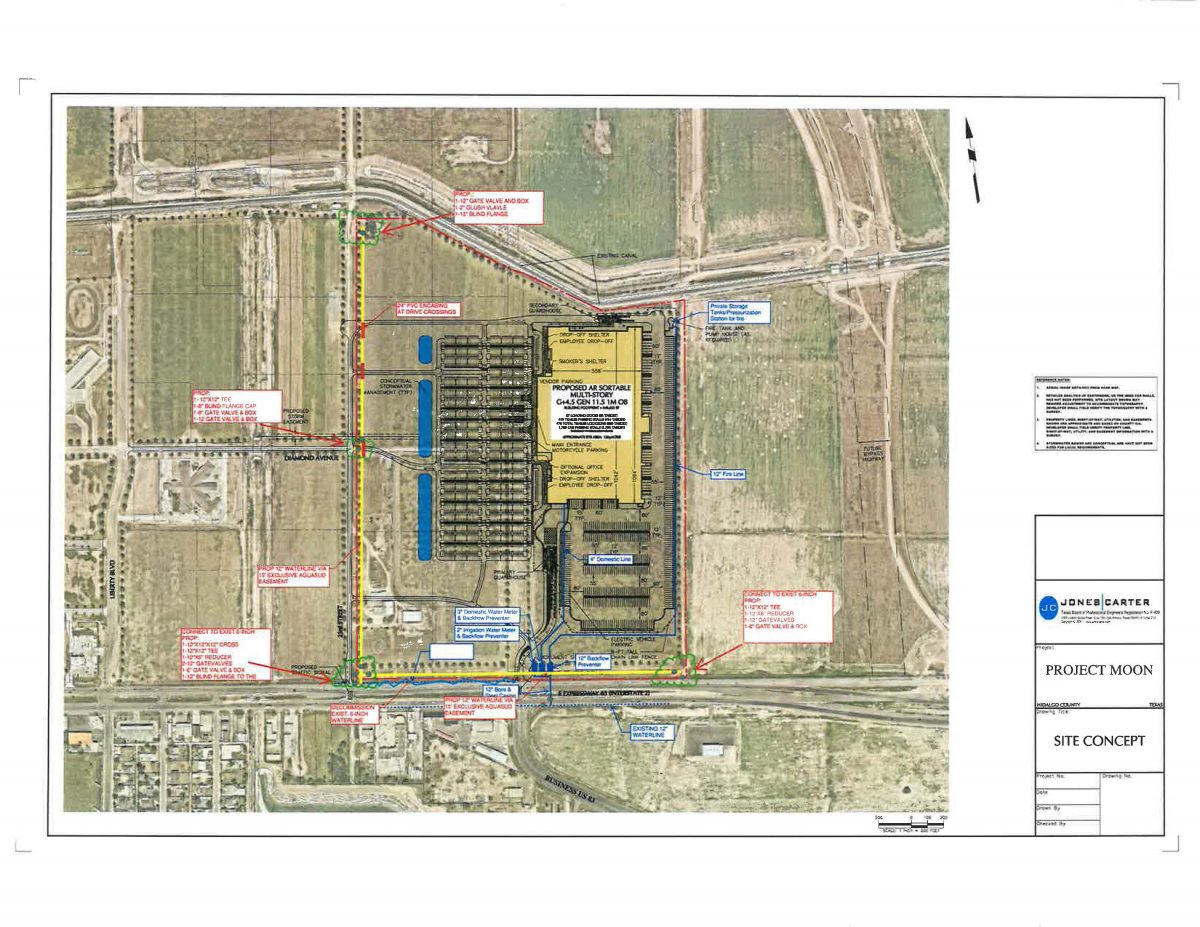 A site concept for the proposed Amazon fulfillment center in Peñitas. (Image released by Agua SUD under the Texas Public Information Act.)

“Around 800,000 square feet in size, sortable fulfillment centers can employ more than 1,500 full-time associates,” according to information published on the Amazon website. “In these buildings, Amazon employees pick, pack, and ship customer orders such as books, toys, and housewares. Thanks to the innovations of Amazon Robotics, associates often work alongside robots, allowing them to learn new skills and helping create a more efficient process to meet customer demand.”

“Ranging in size from 600,000 to 1 million square feet, non-sortable fulfillment centers employ more than 1,000 full-time associates,” according to information published on the Amazon website. “In these centers, associates pick, pack, and ship bulky or larger-sized customer items such as patio furniture, outdoor equipment, or rugs.” 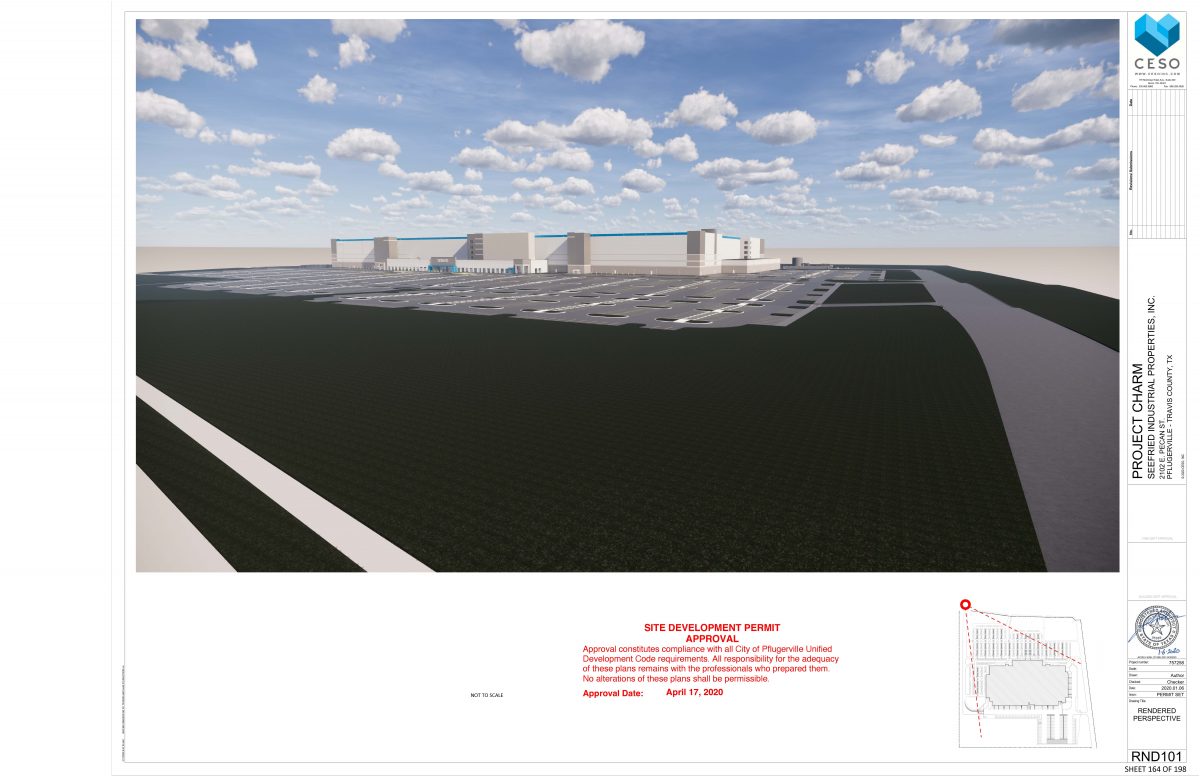 John Womack, the vice president of marketing and sales for Mil Encinos Development, confirmed the project had been canceled but said he couldn’t identify the developers or company by name.

“It’s just a function of the market,” Womack said. “Pure and simple.”

Amazon executives discussed the situation on April 28, when the company released financial results for the first quarter of 2022.

During the pandemic, Amazon experienced a surge in online shopping.

Amazon responded by doubling the size of the company’s fulfillment network and hiring thousands of employees nationwide.

When the surge in online shopping ended, Amazon had “excess capacity in our fulfillment and transportation network,” Chief Financial Officer Brian Olsavsky said on a conference call with analysts.

In 2022, the company reduced expenditures, Olsavsky said, and re-evaluated expansion plans. Work on the fulfillment center in Peñitas stalled.

While they didn’t proceed with the project, Womack said the developers were impressed by how well Peñitas and Hidalgo County worked together.

The project showed that Peñitas is able to compete with much bigger cities for top-tier development opportunities, said Mayor Rodrigo “Rigo” Lopez. Completion of the La Joya bypass and Liberty Road will only make the city more attractive.

“It’s not Amazon today, but we have a lot more knocks on our door on a daily basis,” Lopez said. “Stuff is coming this way.”