A judge reduced the amount of restitution that former Mayor Fito Salinas must pay to La Joya from nearly $321,000 to just $22,000 on Monday.

“If I made a mistake, I want to correct it,” Crane said.

Jose A. “Fito” Salinas, 83, of La Joya and his daughter, Frances, participated in schemes to defraud the city, the La Joya Economic Development Corp. and the La Joya Housing Authority.

A federal grand jury indicted them on wire fraud charges in 2020. 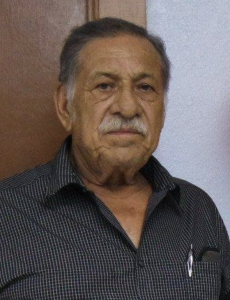 They both negotiated plea agreements with federal prosecutors.

Frances Salinas pleaded guilty to one of three wire fraud charges against her. Prosecutors agreed to recommend dismissal of the other two charges at sentencing.

As part of her plea agreement, however, Frances Salinas had to pay restitution on all three charges — not just the charge she was convicted on.

Fito Salinas also pleaded guilty to one of three wire charges against him. Prosecutors agreed to recommend dismissal of the other two charges at sentencing.

The plea agreement between the government and Fito Salinas, which remains sealed, apparently didn’t require him to pay restitution on charges dismissed by the court.

McCrum argued that Fito Salinas could only be ordered to pay $22,000 in restitution, the “total loss” caused by the crime he pleaded guilty to.

“It was important to point out the very limited scope of Fito Salinas’ involvement in the alleged conduct,” McCrum said in a statement. “His guilty plea was extremely limited in scope, and so Fito and his family are very pleased that the Court amended the Judgment and reduced the restitution to $22,000.”

“Given all of that, I’ll just vacate the judgment as to the restitution amounts,” Crane said. “And I’ll modify it to just the one amount.”

Under the amended judgment, Fito Salinas will pay the city $22,000. The La Joya EDC and the La Joya Housing Authority will not receive any restitution.

“Oh my God,” said Garza, who also serves on the La Joya EDC board. “I am just furious.”

Requiring only $22,000 in restitution sends the wrong message to people who think about stealing taxpayer money, Garza said.

“What is it telling those people out there?” Garza said. “You can go ahead and get away with it.”