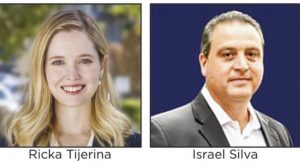 Ricka Tijerina announced her intent to run for Palmhurst mayor in the upcoming special election. Israel Silva, who lost the original May 7 mayoral election, also plans to run again.

The former mayor of 23 years, Ramiro Rodriguez Jr., planned to run for reelection. However, he died on April 5 after it was too late to remove his name from the ballot. But with the help of family and friends campaigning on his behalf, he posthumously won on May 7, forcing a special election.

A special election is essentially a do-over. Candidates resubmit applications or new candidates can join the race, and the process begins from square one. But the city has to declare the special Election Day within 120 days of the May 7 election results becoming official, which was May 16. Once the city announces a new day for the special election, Tijerina, Silva and other hopefuls can submit a candidate application. Until then, people can only state their intention to run, which does not yet officially make them a candidate in the race.

Tijerina is an attorney for Hinojosa Law. Her family moved to Mission in 2009, and despite traveling for work and living in other locations, Tijerina considers Palmhurst her home. The 27-year-old said she is determined to protect the legacy of the late Rodriguez Jr.

As the niece of Justice Jaime Tijerina of the 13th Court of Appeals and granddaughter of Cruz Tijerina, a former federal magistrate in the Southern District of Texas, the mayoral expectant said politics always interested her. She is also the daughter of local business owners Renee Martin and Tomas Tijerina, owners of Renee’s of South Padre Island, the Bingo Ranch and Venture Investment Properties.

“I’ve always found something fascinating about being able to make a change for the place that you are from or where you live or just for anyone in general,” Ricka Tijerina said, “which is why lawyering and politics to me kind of go hand-in-hand — just helping people make that change that they need in their lives.”

The lawyer said she has always seen Palmhurst as a safe place that has all the necessities within reach. It’s a place where she feels families can grow, a place where she wants to grow her own family. But she does not have any specific plans for how she would lead the city if elected. Although she would like to keep Rodriguez Jr.’s legacy intact, she wants to reach out to constituents for their input.

Israel Silva, the other mayoral hopeful, has sat on the council for 12 years. The 50-year-old decided to run for mayor with the intention of taking the city of Palmhurst in a new direction. But unlike Tijerina, he already has a few matters in mind to address.

“We have no sewer, we have no natural gas, we have no park, we’re limited on sidewalks, it takes forever for streets to be repaired, we have no [economic development center], we have no chamber of commerce…we have very little-to-no lighting in neighborhoods and on major thoroughfares as well,” Silva said. “We have no transparency. People don’t know when our city meetings are, which was one of the biggest things for me. My push was always transparency.”

In the dozen years Silva has sat on the council, he said he urged for changes, but he and other city council members did not see eye-to-eye.

“I feel that the best position for me to be in to have a louder voice would be to be mayor,” he said. “I, myself, have been told to stand down because a lot of people…think the citizens don’t want any growth, they want Palmhurst to stay exactly the same, and that’s not true.”

But Tijerina’s father and campaign manager Tomas — a longtime friend of the late mayor — said he believes Silva’s goals for the city are unrealistic. And in the weeks leading up to Rodriguez Jr.’s death, Tomas promised to help keep Silva out of the mayor’s seat at Rodriguez Jr.’s request.

Silva has been pushing for the city of Palmhurst to enter into a contract with Med-Care EMS. Silva’s romantic partner Ronnie Ontiveros is the CEO of the company. But Silva has maintained he has been advocating for Med-Care because they have a faster response time than the city’s current EMS provider. According to Tomas, Rodriguez Jr. saw it as a conflict of interest. The former mayor’s wife Elda Rodriguez was not available for comment before this article went to press.

Regardless, Ricka Tijerina said she feels the voters have already spoken.

“I don’t want to say anything negative about my opponent,” she said. “I will say that I think just looking at it from a third-party view, he did lose to Ramiro; he lost to someone that is no longer with us. I feel like the electorate has kind of decided.”

Silva, however, is not discouraged. He said he plans to continue talking to citizens to understand their needs. Tijerina plans to do the same.

According to City Attorney Darrell Davis, the city has to set the election date between 68 and 62 days before the actual day. The city can wait until as late as July to call the election.