It’s confirmed. Sharyland Pioneer has a flair for the dramatic.

For three consecutive weeks, the team has gone the distance…using all three games to advance.

Thanks to clutch hitting, pitching, and defense the Diamondbacks are en route to its second Elite 8 appearance in four seasons.

Once again Pioneer was dancing and throwing gloves into the air on a warm Saturday afternoon, living to fight another round. 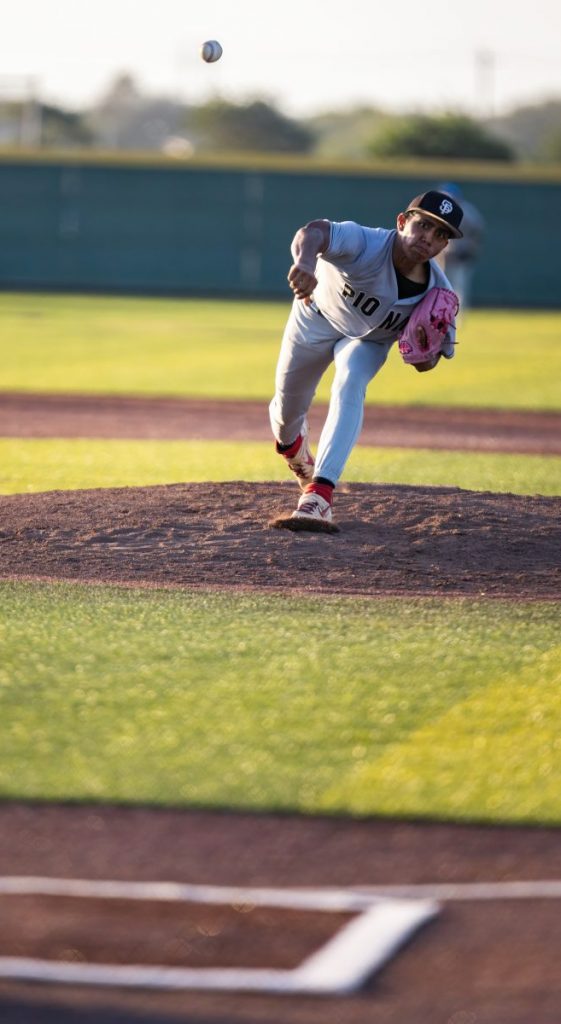 This time Pioneer defeated Buda Johnson in probably the most dramatic fashion yet. Pioneer won Game 3 by a score of 5-4 after dropping a walk-off heartbreaker in Game 2 the night before.

“Definitely not how it’s drawn up on the board but we keep finding a way,” interim coach Shawn Moes said. “We’ve said it over and over…we get punched in the mouth and our guys punch back. The kids came together and just found a way to get it done.”

Getting it done on Saturday took a comeback of their own. Pioneer went up early off of pitcher Rene Vela’s RBI followed by a solo homer from the bat of Ryan Garza.

The 2-0 lead turned into a 2-4 deficit and soon enough the Diamondbacks were down to their final two at-bats if it didn’t right the ship.

“We came into the dugout after the fifth inning and I said ‘guys we’ve got six outs. That’s all we have to make something happen.” Moes told his team. “That was enough to get them fired up. That’s what’s great about this group, you don’t have to give them a bunch of speeches or talk to them a bunch. It’s a veteran group and the veterans take over, they pick everybody up. They’re excited for what’s next.”

In the bottom of the sixth inning, Pioneer got all they needed to pull ahead for good. Two runners got on base before Angel Larranaga hit a single to bring in the first run of the rally. A bunt single by David Benitez loaded the bases, a walk tied the game and Santiago Ortiz hit a sacrifice fly to take the lead at 5-4

“If you’ve watched us play this year, small ball is not something we do a lot of but it’s something we work on every day,” Moes said. “We were able to execute when we needed to. We had big base runners and moving guys over.”

Defense was big in the latter stages of the game. Following a rare bobble by third baseman Oscar Serna that allowed a runner to get on in the 7th, the Diamondbacks turned a difficult double play to finish the series. 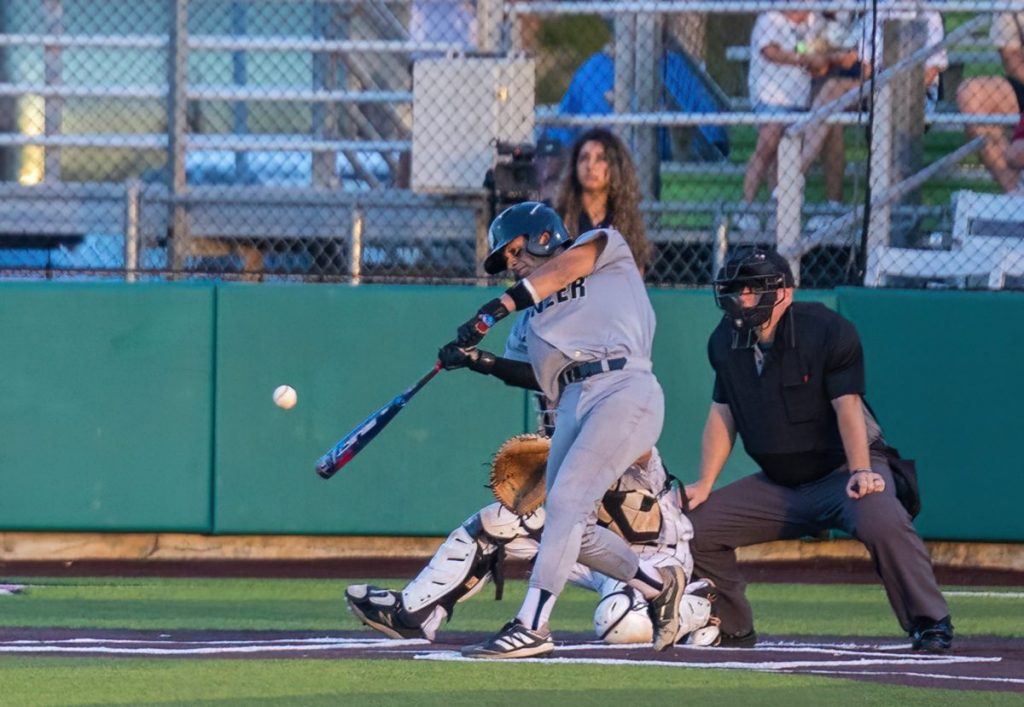 The normally cool, calm, and collected Coach Moes admitted this series did get the stress levels up.

“Today was the first time that I really felt my heartbeat in my chest. I normally try not to show too much emotion, but my heart was beating a little faster than normal. My watch was going off telling me to breathe but we found a way again.” Moes said with a laugh.

Thursday’s Game 1 was an 11-2 rout in favor of Pioneer. Oscar Serna went 3-3 and the bats and arm were working in tandem to send a message.

Friday’s Game 2 had ebbs and flows going in both directions. Buda Johnson took an early lead, then Pioneer’s took command building up to a 4-2 lead into the final frame. Johnson, batting as the home team, extended its season with a dramatic walk-off win by scoring three runs with two outs. 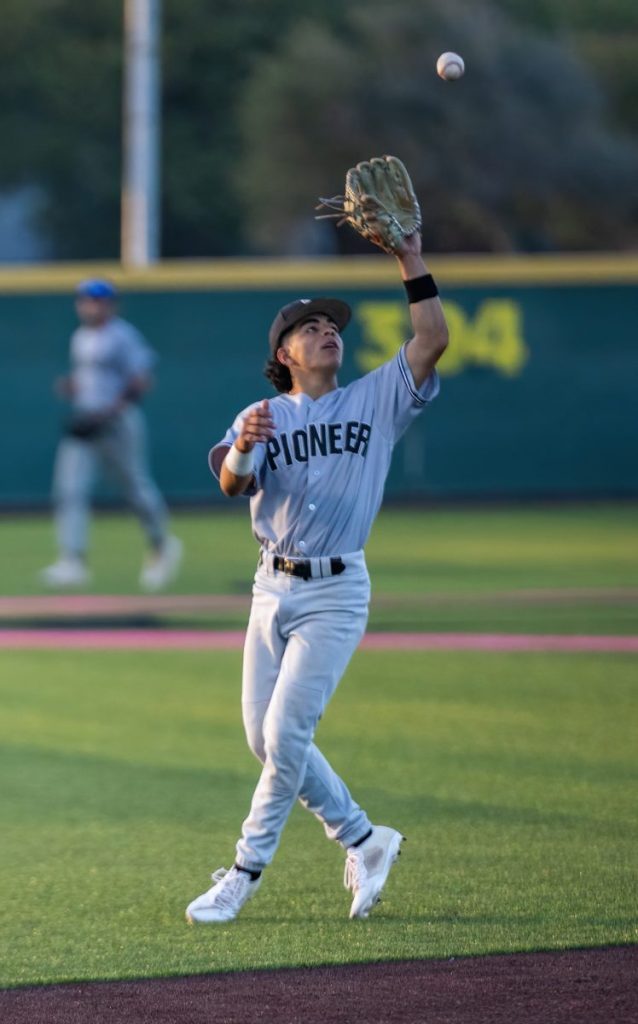 Despite an opportunity missed, in typical Pioneer fashion this postseason, the Diamondbacks’ resolve was strong to earn its second trip to the Elite 8 in four seasons.

Moes talked about the Valley-wide support he has been receiving during this playoff run.

“My phone has been going off the hook the last couple of weeks,” Moes said. “We’ve gotten great support throughout the Valley; our teachers, our staff, our administrators, our janitors just in general the support. It’s fun to watch, I know the kids enjoy it. They’re getting the limelight. Baseball is really good in the Valley, it’s just overlooked a lot.”

The next opponent for the Diamondbacks will be the Georgetown Eagles who just swept the No. 1 team in Class 5A, Corpus Christi Ray.

A special year for the La Joya Coyotes came to a difficult conclusion at the hands of state powerhouse Austin Lake Travis yesterday. Division 1 talent and big bats were too much for the Coyotes to overcome, falling in two games by scores of 11-0 and 6-0.

Despite the sweep, the La Joya program has a lot to look back at fondly. The Coyotes finished in third place in 31-6A but ended up as the last RGV program standing in the 6A classification and one of two to reach the fourth round in 2022.