Norie Gonzalez Garza is now officially the first woman to hold the mayoral position for the city of Mission. With the crowd chanting her name and standing ovations, Judge Letty Lopez swore in Gonzalez Garza as Mission’s next leader. 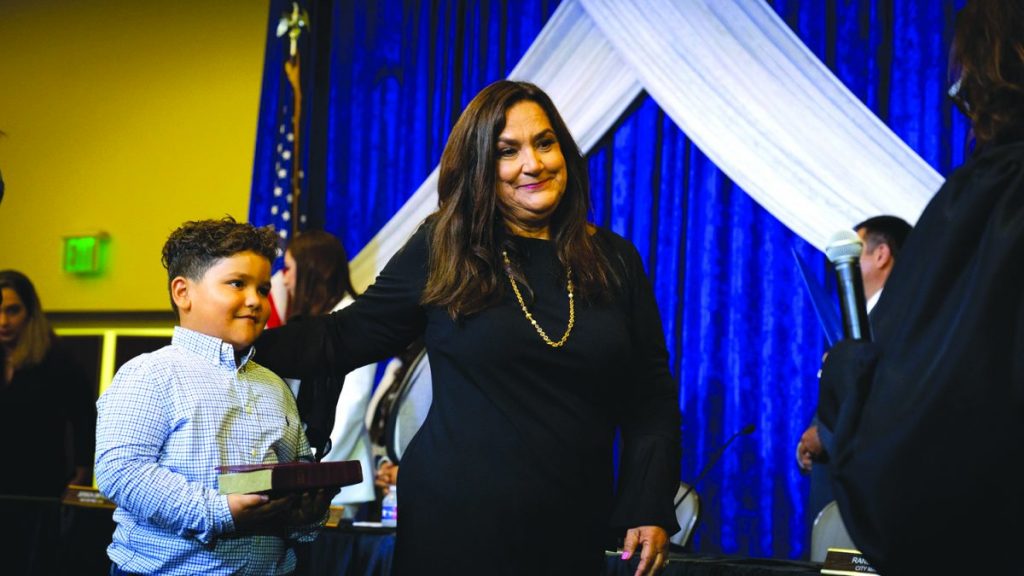 Mayor Norie Gonzalez Garza with her grandson. Photo courtesy of the City of Mission.

Although Gonzalez Garza made Mission history when voters elected her as mayor, she said it was never something she thought about when she decided to run for the position.

“I really didn’t put a lot of weight on being the first woman mayor. I thought the most important thing was that I was the best candidate at the time, and I still believe that,” Gonzalez Garza said. “But I do know that I have impacted the younger kids. They’ve come up to me and they’ve hugged me, and they’re excited for me. I see that excitement with them, and I think that they feel they’ve been empowered. So I guess in that sense, I’m happy for that as well.”

Mission’s new mayor has a background as a real estate broker. She sat on the city council since 2007, where she also served as mayor pro tem for eight years. Before becoming a councilwoman, Gonzalez Garza also served on several boards for the city of Mission, such as the planning and zoning commission and the financial advisory committee. 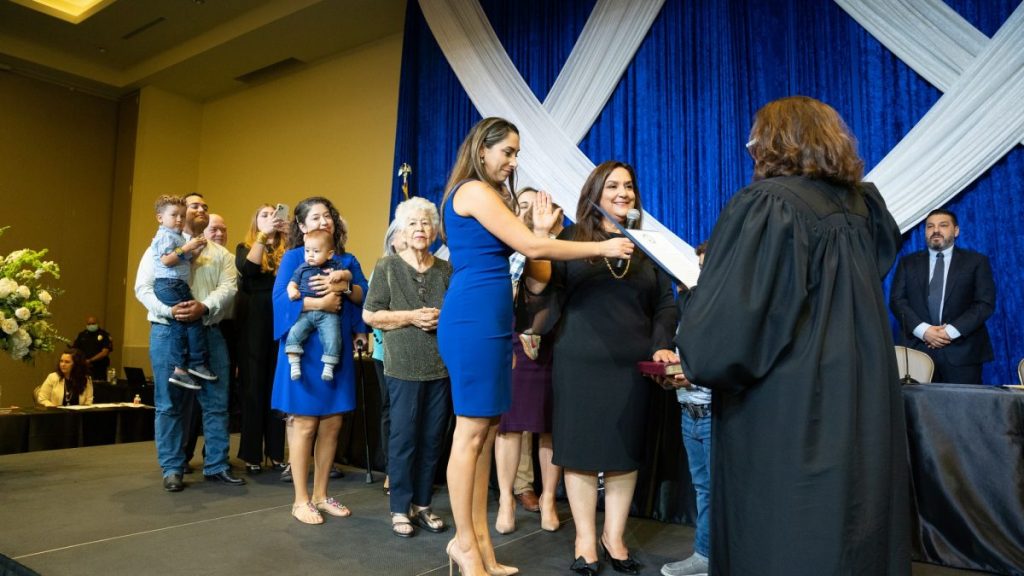 Mayor Norie Gonzalez Garza with her family. Photo courtesy of the City of Mission.

City Council held a special meeting to canvas the votes and swear in the new mayor and returning councilwoman on June 20. Once the council made the runoff election votes official, they declared Gonzalez Garza the winner over Armando “Doc” O’Caña. The former city councilwoman won the vote 3,946 to 3,103, taking the majority of the early votes and Election Day votes. O’Caña, however, had the absentee vote majority.

The council members presented O’Caña with two placards before he vacated his seat. The outgoing mayor also addressed a circulating video where Councilmember Ruben Plata states the city is “$8 million in the hole.” O’Caña said the information was false and referenced an audit from September 2021 when the fund balance was $7.5 million.

In a later interview, Gonzalez Garza clarified the issue.

“That $8 million is what the city has paid toward the [Performance Services, Inc] contract improvements which would be the LED lighting and the smart meters that have already been installed,” she explained. “So the city has made those payments and that was a loan that was secured. So basically, when you have a loan, you have a debt. So there is a debt for that amount.”

O’Caña, along with councilmembers Alberto “Beto” Vela and Jessica Ortega, voted to approve the $17 million contract in January 2021. The federal government has since then placed PSI under investigation after documents revealed the contract was an elaborate scam. According to social media discussion among constituents, the litigation was one reason Missionites favored Gonzalez Garza over O’Caña at the polls.

Mayor Norie Gonzalez Garza surrounded by her family. Photo courtesy of the City of Mission.

Despite the loss, O’Caña said he wishes the incoming mayor good luck, and said he is available should she need advice or guidance in her new role. But Gonzalez Garza said the transition should be easier because she held a seat on the council for 15 years and is knowledgeable about the ongoing projects.

Now that she is sworn into the position, she can meet with vendors, city employees and constituents to hear concerns and ease them into the change of authority.

At the June 21 regular city council meeting, Gonzalez’s first meeting as mayor, she reiterated her appreciation to the voters and city staff, and gave out her cell phone number for people to reach her directly.

“Anybody listening out there, please don’t hesitate to call me if you have any questions or concerns or suggestions…I’m available,” she said. 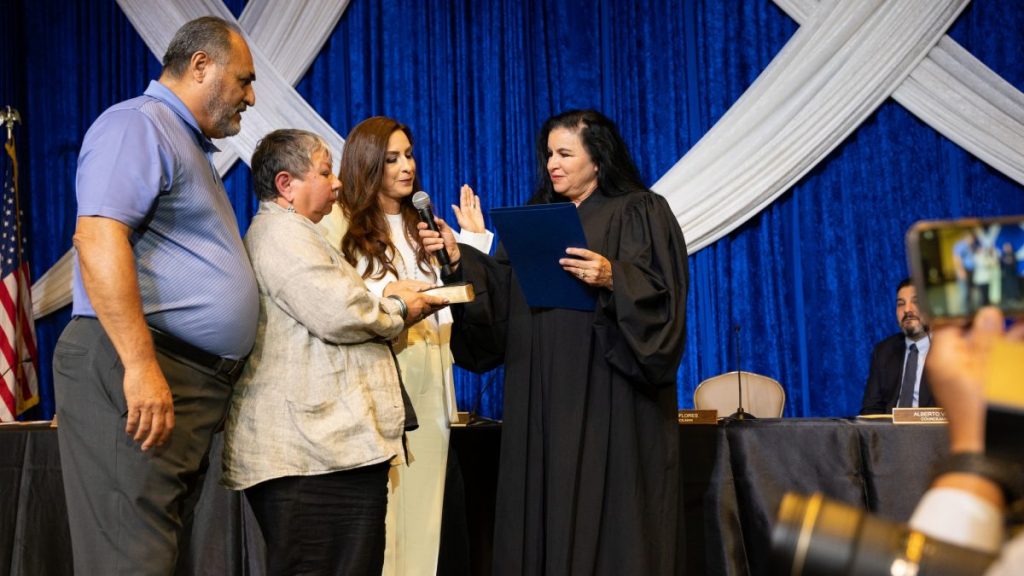 Councilwoman Jessica Ortega was sworn in by JP Sonia Trevino surrounded by her family. Photo courtesy of the City of Mission.

Councilmember Jessica Ortega also won the runoff election to retain her place 1 seat. Once city council canvassed the votes and made them official, they reported Ortega defeated her opponent Moises “Moy” Iglesias 3,671 to 3,274 votes. Judge Sonia Treviño swore in Ortega, who begins her third term on Mission City Council.

Throughout her campaign, Ortega used a phoenix as her symbol. In an April interview, she explained that the emblem signifies her rising from the ashes of adversity.

“My message, very wholeheartedly, is to rise for community growth, strength and unity because I feel these past four years, our community has been torn apart every which way through adversity, through the COVID, through just financial, through all of this stuff. Even politics plays a role in that,” Ortega said in the April interview. “I wanna be the one that unites our community and [gives] us strength to move forward.” 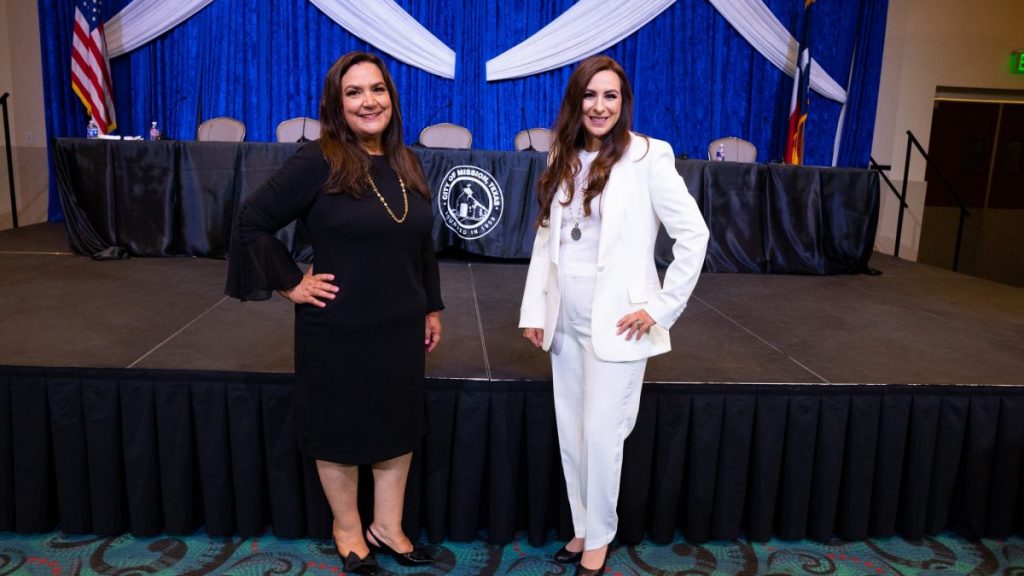 Mayor Norie Gonzalez Garza and Councilwoman Jessica Ortega. Photo courtesy of the City of Mission.Ortega recapitulated this sentiment during her induction ceremony and stressed the importance of working together to achieve goals.

“You have given me the privilege of four more years. I will continue to be your public servant because of you,” the councilwoman said during her speech to the community. “And even for those of you that did not support me, I hope I can be a strong and steady voice in our city government.”