During a hearing on Thursday afternoon, Lopez “admitted that in 2018 he aided and abetted the La Joya Independent School District (LJISD) athletic director in committing fraud against the district,” according to a news release from the U.S. Attorney’s Office for the Southern District of Texas.

“As a vendor, Lopez sold approximately 156 baseball gloves, 15,400 square feet of turf and three pitching machines to LJISD between March and August 2018 for a total of approximately $70,010,” according to the news release. “In efforts to approve the inflated costs associated with those purchases, Lopez fraudulently submitted over 20 separate invoices to the La Joya athletic director in efforts to aid and abet circumventing of competitive procurement procedures and subsequent approval of the invoices.” 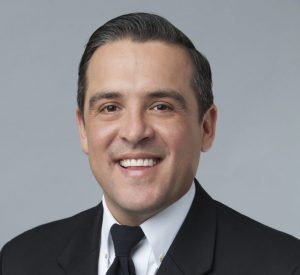 Lopez campaigned with Armin Garza, Jose Roel “J.R.” Flores and Ramiro Loya. After taking control of the City Council, they made big changes at City Hall.

During the next few years, they became a major force in western Hidalgo County politics.

Lopez won a second term in May 2019. He received 68% of nearly 1,500 ballots cast in the mayoral race and crushed his opponent, former Mayor Marcos Ochoa, in every precinct.

Questions about Lopez surfaced in 2021, when the FBI served the city of Peñitas and La Joya ISD with grand jury subpoenas.

The subpoenas requested documents on Lopez and Xizaka LLC, a company Lopez created.

While the indictment didn’t identify the employee, the “Ship to Information” on documents released by La Joya ISD lists Alex Guajardo as the contact person.

At the time, Guajardo was the athletic director for La Joya ISD, according to salary data released by the school district.

Guajardo also served with Lopez on the City Council. He resigned in February after pleading guilty to a public corruption charge.

As part of his plea, Guajardo confessed to bypassing “traditional competitive bidding procedures” to approve purchases from a company owned by another public official.

The cases against Lopez and Guajardo are part of a federal investigation that revealed widespread corruption in western Hidalgo County.

Garza, Romero and Morales struck deals with the government and pleaded guilty to public corruption charges. The FBI arrested Lopez in June, when he returned from a vacation in Mexico.

Lopez initially pleaded not guilty. In a motion filed last month, however, his attorney said he needed additional time to “pursue a negotiated resolution.”