Pharr sent Hidalgo County a termination letter on Monday, informing the county that Pharr EMS would stop responding to 911 calls in Precinct 3 — the western part of Hidalgo County — unless the county paid at least $1.7 million.

The Progress Times requested an interview with the city on Aug. 17 to discuss the financial status of Pharr EMS. The city declined the interview request on Tuesday.

Under the existing agreement between Hidalgo County and Pharr, which expires in May 2024, the city doesn’t charge the county for EMS service. The agreement may be terminated by Pharr or Hidalgo County with 30 days notice. 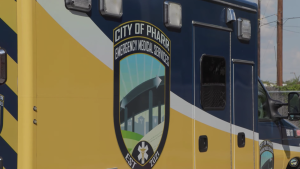 A Pharr EMS ambulance. (Image courtesy of the city of Pharr.)

According to the letter, Pharr will stop responding to 911 calls in Precinct 3 unless Hidalgo County agrees to start providing the city with a subsidy.

Villarreal said he wished Pharr had approached Hidalgo County to discuss a reasonable subsidy or partnered with the county to come up with some kind of solution.

“I am disappointed by their decision to immediately invoke the termination clause of our contract,” Villarreal said, adding that he will do everything possible to avoid a lapse in ambulance service.

Precinct 3 could partner with the city of Palmview, which operates Palmview EMS; solicit bids from privately owned ambulance providers, which may charge less than Pharr; or contact the state, which could dispatch an ambulance strike team to Hidalgo County.

“We’re working every angle,” Villarreal said, adding that the safety of Hidalgo County residents is always his top priority.

During the past few weeks, Pharr asked District #2 to pay $1.2 million, said Jason Peña, the chairman of the emergency services district board of directors.

Peña and Sandoval said Pharr hasn’t sent District #2 a termination letter. To prepare for that possibility, Peña said District #2 had created a committee to study how the emergency services district could buy ambulances and start responding to 911 calls itself.

The city of Pharr launched Pharr EMS in 2021, when the city purchased the assets of Hidalgo County EMS — a privately owned ambulance company — during a bankruptcy sale.

Pharr paid $1 million for the company’s assets, which included 98 ambulances.

Pharr EMS also started responding to 911 calls in Precinct 3 and District #2, which had been served by Hidalgo County EMS before the company declared bankruptcy.

Precinct 3 and District #2 are both rural, low-income parts of Hidalgo County where many people can’t afford health insurance.

Pharr spent about $1.5 million on EMS service for Precinct 3 from July 2021 to June 2022, according to information the city provided to Hidalgo County. The city, however, received just $936,600 in revenue, which resulted in a nearly $604,000 deficit.

“If the County is willing to renegotiate the existing agreement to include the proposed subsidies and a new term, please contact me,” according to the letter, which is signed by Pharr City Manager Andy Harvey.

“I think that we need to figure that out, and have a little more time than possibly 30 days,” Cortez said. “But it is what it is.”

Officials from across Hidalgo County need to come together and find a solution for providing EMS service, Cortez said, adding that the current, fragmented system is neither efficient nor effective.

“When we have a community problem, we sit down and try to figure it out,” Cortez said. “But we all have budgetary constraints.”