After hemorrhaging cash for the past 12 months, Pharr EMS may finish the fiscal year with a nearly $6.9 million deficit.

The city of Pharr projects that Pharr EMS will cost taxpayers nearly $12.9 million during the 2021-2022 fiscal year, which ends on Sept. 30, according to information reviewed by the City Commission on Tuesday. Pharr EMS, meanwhile, is projected to collect just $6 million in revenue — leaving the city with a nearly $6.9 million loss.

“There’s a deficit,” said City Commissioner Roberto “Bobby” Carrillo. “But the money will start rolling in.”

“I personally feel it’s the collections,” Carrillo said, when asked what caused the deficit. “We’re moving ahead with a different collection company.”

Pharr EMS also had about $6.2 million in revenue that remains outstanding, according to information reviewed by the City Commission, which didn’t provide any details. It’s not clear how much of the $6.2 million Pharr could actually collect.

Carrillo said the City Commission is working on a plan for Pharr EMS and the financial problems do not threaten Pharr, which had a $229 million budget for the 2021-2022 fiscal year.

“The city’s going to be fine. We’re still doing well. We’re healthy,” Carrillo said. “We’re nowhere close to being under or upside down or anything like that.”

Pharr created Pharr EMS in 2021, when the city purchased 98 ambulances during a bankruptcy sale.

“According to the City, all projections made by reviewing financial records of the former company indicate that implementing this new service and operations will be a self-sustaining model that will benefit the citizens of Pharr and the region,” according to a statement the city released in April 2021. “With two medical professionals serving on the Pharr City Commission, Mayor Dr. Ambrosio Hernandez and Commissioner Dr. Ramiro Caballero, and with the support of the entire City Commission, Pharr was already working toward establishing its own EMS department, researching similar models across the country with the goal of functioning as a well-trained, highly-effective, public health service to the community.” 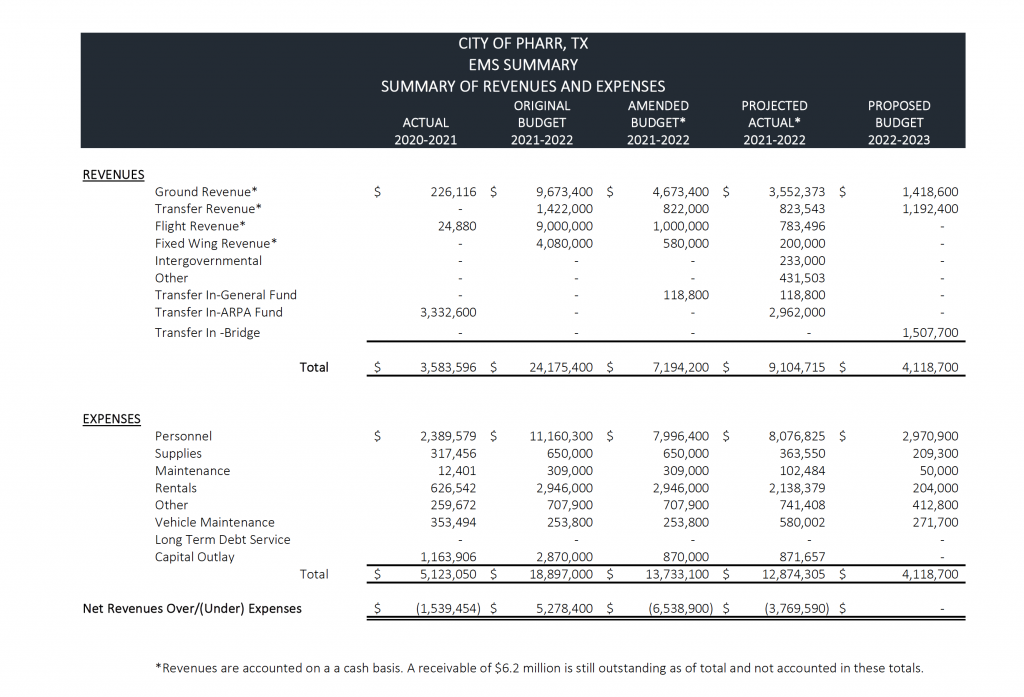 The total included nearly $9.7 million from ambulance calls, about $1.4 million from non-emergency transfers, $9 million from helicopter calls and nearly $4.1 million for medical transfers on a plane leased by the city.

Pharr EMS fell short in every category, according to projections reviewed by the City Commission on Tuesday.

The city projects Pharr EMS will earn just $783,000 from helicopter calls, less than 10% of the budgeted amount. Revenue from the plane, meanwhile, is projected to reach a paltry $200,000.

Pharr EMS may end the fiscal year with just $6 million in revenue, less than 25% of what the city projected in September 2021.

The city also plans to pare back Pharr EMS during the 2022-2023 fiscal year, which begins in October.

How many Pharr EMS employees will be affected by the cutbacks remains unclear. The proposed 2022-2023 budget, however, shows a major reduction in payroll costs.

City Commissioner Eleazar Guajardo said he couldn’t discuss how the smaller budget would affect Pharr EMS, which employed more than 100 people in January.

“We’re just finalizing our budget,” Guajardo said. “And I’m not at liberty to give any details on what we’re doing.”