The fact that the high school XC (cross-country) season coincides with football and volleyball seasons, oftentimes results in XC being overshadowed by those highly popular sports. Add to that the fact that distance running is not exactly a spectator sport, and XC has two strikes going against it when it comes to receiving the coverage it deserves. But the fact that the Sharyland Rattlers and Lady Rattlers XC teams are both ranked at the top of the Rio Grande Valley Coaches Association’s (RGVCA) Top 10 rankings, in conjunction with the fact that there are no Big 7 football games scheduled this week, made this the perfect opportunity for us to give the Rattlers and Lady Rattlers XC teams some of that well-deserved coverage. 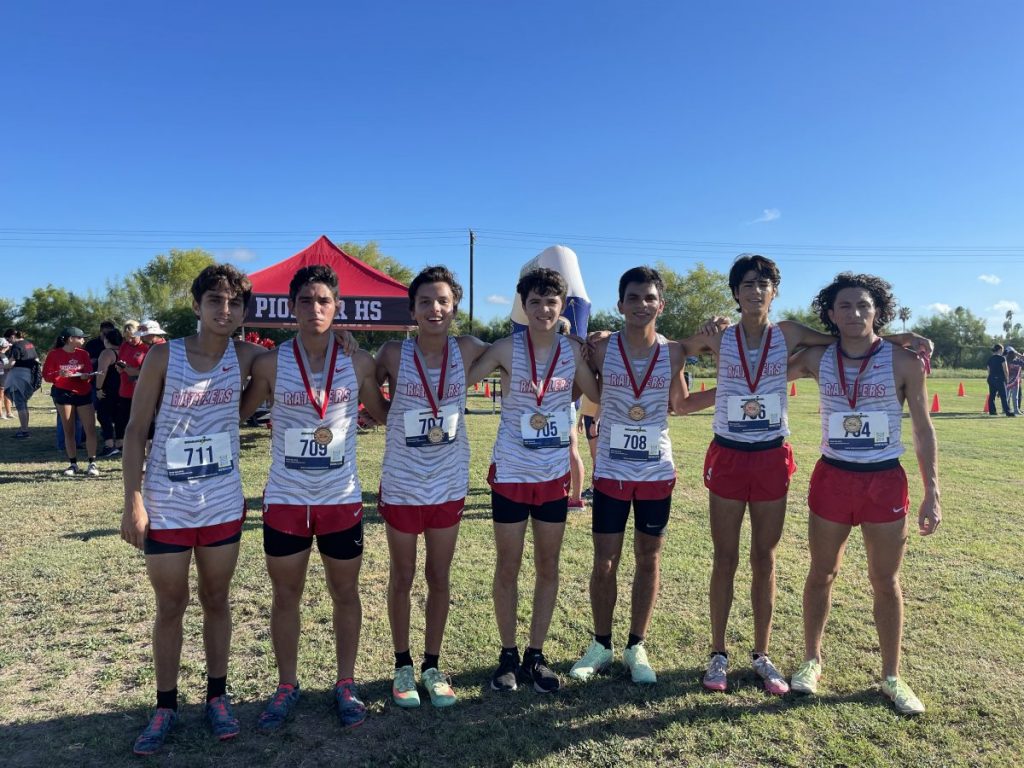 How impressive is it for both SHS teams to be ranked #1 in the Valley? The fact that the only other Big 7 XC teams, boys or girls, to be named to the RGVCA Top 10 rankings are the Mission Veterans Lady Patriots (5th) and the Pioneer Lady Diamondbacks (10th), should be all it takes to answer that question.

While the Lady Rattlers have eXCelled under the leadership of Melissa Dearth over the 15+ years she has coached the team, seven as an assistant and eight plus as head coach, the Rattlers boys have not enjoyed the same level of success. That may be changing now however as Jorge Guerra enters his eighth year of coaching the Rattlers boys, four as an assistant and four as head coach. And the fact that his boys have done so well at the meets they’ve competed in thus far this season that they are now ranked atop the RGVCA Top 10 rankings is an eXCellent indicator of how well they’re doing.

“My first two years (as head coach) we were a little short on missing Regionals,” Guerra said, “We did have some individuals make it, but the first two years we didn’t make it out (as a team). Last year we made it to regionals as a team after placing second at district. And now we’re looking forward to this year. We have a pretty solid team and we’re excited to go out there and race.”

“At the Rio Grande City meet we placed second,” Guerra said. “At the McAllen meet we placed first. At the Pioneer meet, which was our practice district meet, we placed first. At the FEAST Invitational, which is in Selma, Texas, we placed seventh out of 35 teams. At Palmview High School we placed first. Then we took a break the following weekend. Then this past weekend we were at the McNeil Invitational, which is a practice state course and which had 19 teams competing on the boys side with only three 5A schools and the rest were all 6A schools. We managed to place 12th out of the 19 teams, which were pretty much all 6A, so we did pretty well in that one.”

When asked what it is about his boys that has made them so successful this year, Guerra said, “It’s their love for the sport. They’re very dedicated and very disciplined in everything that we do. I don’t have to tell them more than once what the next workout is or how much rest we’re going to get. They have the desire to keep getting better with the weight room, the runs and their eating habits. These guys take care of themselves a lot and it shows.”

While the Lady Rattlers qualified for last year’s UIL State XC Championships as a team, the Rattlers boys have never accomplished this amazing feat. That however is something Guerra and his boys are looking to change this year.

“The guys, they know that it’s a possibility,” Guerra said. “With the times we’ve been hitting and the way that we’ve been working, it’s a big opportunity for them and they’re excited. They feel that if they keep going the way they’re going, they’re going to have a pretty good chance of making it to state.”

Leading the way for the Rattlers boys is senior Valdemar Meza, who is third among the boys in the RGVCA Top 10 Individual Times rankings with a time of 15:38.0. He however has not always been as successful in, or as committed to, the sport as he is this year.

“Coming in as a freshman I was not that good,” Meza admitted. “My first race ever was a two mile which I ran in 13:42. So I wasn’t the best but our coach really understands all of us and how to make us better without our hurting ourselves. Limiting us is not really a thing we do around here. We try to improve without risking injury and everyone gets to do their own thing.”

Meza has had much more success thus far this year than ever before. Even so, his favorite meet was one in which he did not even compete.

“At the McAllen Invitational, which was our second meet I believe, I was out because of an injury I had in my calf and they (his teammates) shocked me,” Meza said. I was out there cheering them on and throughout the whole race I saw that they were together and honestly, I was so excited that I screamed at them the whole race. When it got to about 400 meters to go, they were all just right there and even then I didn’t know that we were in it to win, but then about 20 minutes later our coach walks up with the plaque and I was just in shock. That really motivated me and made me realize that we have a contending team and we can do big stuff.”

Leading the way for the Lady Rattlers is junior Cecilia Cavazos who is fourth among the girls in the RGVCA Top 10 Individual Times rankings with a time of 19:05.4. Her teammates are senior Daylah Vega, juniors Carolyn Tudor, Albeza Heredia, and Briley Gaona, sophomore Valeria Azcarate and freshman Michelle Barragan.

Cavazos was a member of the Lady Rattlers team that qualified for, and competed at, the UIL State Championships meet last year. When asked what that experience was like for her, she said, “It felt really good. It felt like I finally found a group of people that I really want to spend most of my time with. It was a real eye-opener, running with a bunch of girls, and I just felt good running with my team.”

While the fact that Cavazos’ training involves running on a daily basis may not be surprising to those not familiar with the sport of distance running, chances are those same people have no idea how much running it takes for her to eXCel at her chosen sport.

“I run every day, twice a day,” Cavazos said. “The most I do on my own is probably seven miles in the morning and in the afternoon probably around four or five (miles). I run in my neighborhood, at the hike and bike (trail) and at some parks.”

Cavazos, whose nickname is Twinkle Toes due to the fact that she runs up on her toes like a ballerina, shared what it’s meant for her to be part of the Lady Rattlers XC team when she said, “It means I have a loving team and that I have loving coaches and all the support in the world.”