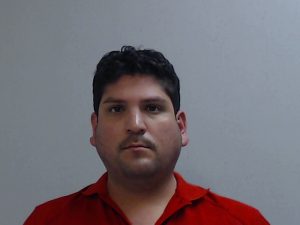 The police corporal asked Saenz to rank himself on a scale of 1 to 10, where 1 would be sober and 10 would be intoxicated.

“About four or five,” Saenz said, according to the affidavit.

Saenz agreed to provide breath samples, which showed a blood alcohol concentration of about 0.11. The legal limit is 0.08.

The police corporal arrested Saenz on suspicion of driving while intoxicated, a Class B misdemeanor. If convicted, Saenz faces a maximum of 180 days in jail and a $2,000 fine.

Officers transported Saenz to the Hidalgo County jail, where he was booked at 5:40 p.m. Sunday. The jail released Saenz at 7:17 p.m. after he posted a $2,000 personal recognizance bond.

Starr County hired Saenz in 2010, according to Texas Commission on Law Enforcement records. A spokesman for the sheriff’s office declined to comment on Saenz’s arrest.