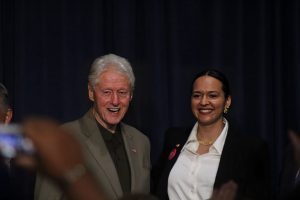 “Aqui del sur de Tejas, nosotros defendemos. Here in South Texas, we defend ourselves,” she said in her opening statement, combating Republican claims that the RGV remains unsafe and violent as a border community.

She highlighted healthcare, employment, and education as overlooked resources not provided to Rio Grande Valley by the federal government.

“We deserve the best opportunities,” Vallejos said. “When I go to congress, I’m not coming alone. I’m coming with my entire community.”

Vallejo asked supporters to spread her message to those who feel disengaged by politics and government due to not seeing solutions or answers.

“This is South Texas fighting for South Texas, and I need everybody in this fight with me,” she said, condoning what she claims is propaganda from the conservative party. “We’re going to send a message not just to our community in South Texas, not just in the state of Texas, but nationwide: That [as] Latinos, you do not take advantage of us.”

“That woman is the future of South Texas,” said the 42nd President of the United States as he approached the podium, speaking to a crowd of over 500 people.

Clinton briefly commented on how he and various Democratic candidates have worked to bring RGV issues to light in Washington.

“Whenever the Democrats in Washington took their eyes off of South Texas, we tried to put them back on,” said Clinton.

“If you send Michelle to Congress, it will send a loud message,” he said

Immigration, crime rate, and gun control were topics Clinton briefed on, before stating that the opposing party’s polarization pushes the public to be fearful of change.

He then showed his support towards those running.

“If you look at everybody who’s running here,” Clinton said, pointing out supporters holding signs for Beto O’Rourke, Michelle Vallejos, and other moderate and progressive candidates. “This is the model of what America ought to be.”

After the event, Vallejo recognized the lower voter turnout, urging people to head to the polls.

“Voter turnout is lower than expected,” Vallejo said. “Our Latino vote is one of the most powerful in history right now, and we’re going to send this message tomorrow night.”

Vallejos hopes that this turnout sets an example to show that change is possible.

“We are not just going to sit back and wait for change to happen,” she said. “We’re going to show up.”