Mission CISD’s football fields are one step closer to getting new turf. At the Nov. 9 board of trustees meeting, the school board approved the best and final offer for the synthetic turf projects at Tom Landry Hall of Fame Stadium and Veterans Memorial High School Patriot Stadium.

For both fields, the total project cost is $1,568,488. Hellas was the only contractor that submitted a bid proposal. But they are also uniquely qualified for the job because they installed the turf for both football fields at Mission High School and Veterans Memorial High School in 2014.

Hellas offered a repeat customer discount at $25,000 per field, and they are participating in the scoreboard partnership platinum package. The company will pay an additional $5,000 for stadium advertising sponsorship for the new scoreboard at the MHS stadium, which they included in contract negotiations.

A G-max drain shock pad is an extra layer of support under the artificial grass that also helps with water drainage. It makes for a safer playing surface and reduces downtime after heavy rainfall.

G-max is the measure of shock absorbency upon impact. Over the summer, Mission CISD hired Tait-Pitkin Sports Engineers to conduct a G-max test on the fields at both high schools, determining the hardness of the surface. The lower the G-max rating, the more energy the surface absorbs, meaning the player on the field would feel less energy upon impact. A 60 rating is considered soft, but one of Mission CISD’s football fields registered at a rating of 200. Tait-Pitkin determined the district needed to upgrade the turf after the 2022 football season to avoid injury.

At Tom Landry stadium, the new turf will keep the Hall of Fame logo on the 50-yard line. In September, district leaders said they were unsure if Mission CISD would be able to continue using the logo because of the informal nature of the original agreement the former superintendent made. But Director of Public Relations and Marketing Craig Verley confirmed MCISD has legal agreements in place with the Pro Football Hall of Fame.

The project should begin in December, and the contractor has 50 calendar days for substantial completion. The projects as a whole should take two to three months, and the district is hopeful for minimal disruption to the spring sports. 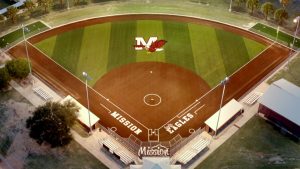 At the Nov. 9 school board meeting, the trustees approved a netting project for the baseball and softball fields at both high schools. Each will receive new protective netting or fencing, but not until after the 2023 season.

According to Assistant Superintendent for Operations Rick Rivera, the fields currently have a fencing area lower than needed that offers limited coverage. The proposed project is for a higher fencing and netting system that extends further to each side or close to each dugout, providing protection to spectators in that area.

Additionally, the project will include a 3-to-4-foot pony wall as the backstop. The existing backstop is a board wall, but the pony wall will be brick veneer with interior padding.

The estimated cost for all four fields, including project contingency and design fees, is $520,700. Mission CISD will use the on-call structural engineer Miguel Chanin for the project.