An engineer charged in the western Hidalgo County corruption case may head to trial in February.

Mariano Garcia, 50, of Mission — the owner of M. Garcia Engineering — is scheduled for jury selection on Feb. 27.

“We expect that our case in chief will take two days, probably, at most,” Assistant U.S. Attorney Roberto “Bobby” Lopez Jr. said on Jan. 5, when the court held a status conference to discuss the trial date. “I don’t know if the defense intends to put on a case in chief.”

The case against Garcia is part of a wide-ranging federal investigation that focuses on corruption in western Hidalgo County.

Prosecutors brought charges against 14 people during the past two years, including four businessmen, two former members of the La Joya school board and the former mayor of Peñitas. 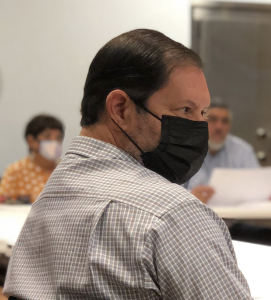 Documents filed in the cases against them describe a conspiracy to steer contracts to Performance Services Inc., a company that specializes in “energy savings” projects. People who participated in the conspiracy received millions in bribes and kickbacks.

“The Owner Representative will be compensated three percent (3%) of the project value to be paid through project funding at the commencement of project,” according to the contract between M. Garcia Engineering and Agua SUD, which the utility district released under the Texas Public Information Act.

The FBI and the U.S. Attorney’s Office for the Southern District of Texas, however, concluded the contract between M. Garcia Engineering and Agua SUD was part of a kickback scheme.

According to the indictment, Garcia “gave approximately $249,839.19 to Andres Morales, through RGV Redlight, as instructed by the Agua SUD General Manager intending to influence and reward said General Manager for his official support and recommendation for Agua SUD to award Defendant’s company a contract to serve as an owner’s representative in connection with an energy savings project” from March 19, 2018, to June 6, 2019.

Witnesses in the case may include Morales and former La Joya school board Trustee Armin Garza, who pleaded guilty to conspiracy to defraud the United States in January 2022; former Agua SUD General Manager Jose E. “Eddie” Saenz, who served as general manager from 2018 to 2021; and former Peñitas City Manager Omar Romero, who is awaiting sentencing on bribery and bankruptcy fraud charges.

Garcia is charged with theft. If convicted, he faces a maximum of 10 years in federal prison.