The Mission City Council on Monday rejected a request from retired Fire Chief Gilbert Sanchez to cash out more than 1,500 hours of sick leave.

Sanchez had more than 1,500 hours of sick leave when he retired on Dec. 31, according to a document Mission released under the Texas Public Information Act. Based on his salary, the sick leave would be worth more than $75,000.

Under city policy, however, Sanchez could only be compensated for 720 hours.

“In my opinion,” Sanchez wrote in his resignation letter, “an employee that has high amounts of vacation and sick leave is a dedicated employee and should not be penalized for the dedication to the community.” 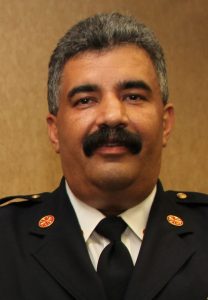 The City Council discussed his request on Monday afternoon but decided not to take any action.

“I think the consensus of the council is that we need to follow policy,” said Mayor Norie Gonzalez Garza.

Several employees made similar requests during the past few years. Gonzalez Garza said that she couldn’t recall an instance where the City Council approved a payout that didn’t comply with city policy.

While the City Council reviewed the requests, Gonzalez Garza said it would be difficult to justify making an exception for one employee but not another.

“And that could be a real problem,” Gonzalez Garza said.

It could also cost Mission hundreds of thousands of dollars.

When an employee resigns or retires, Mission compensates the employee for unused sick and vacation time. How many hours the city pays out depends on how long the employee worked for Mission.

Sanchez joined the Mission Fire Department in December 1994. He retired in December 2022 after 28 years on the job.

Under city policy, a non-civil service employee hired before Oct. 1, 2012, who spent 25 to 29 years with Mission is allowed to cash out 720 hours of sick leave and 250 hours of vacation time.

In his resignation letter, Sanchez asked City Manager Randy Perez to pay out the full amount.

“Under the circumstance,” Sanchez wrote, “I was not given the opportunity to reduce those hours.”