What, exactly, Talavera would plead guilty to remains unclear. When they appeared in court, Salazar and Garcia didn’t provide any details about the charge. 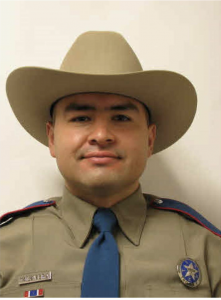 Both the U.S. Attorney’s Office for the Southern District of Texas and Garcia declined to comment.

After he pleads guilty to the criminal information, prosecutors would dismiss the indictment against Talavera, who is charged with participating in a conspiracy to possess 500 grams of methamphetamine and 1 kilogram of heroin with intent to distribute.

The agreement would almost certainly result in a less severe sentence for Talavera, who faced a mandatory minimum of 10 years in federal prison on the conspiracy charge.

The FBI arrested Talavera in October 2021 after investigating a drug trafficking organization that smuggled methamphetamine from Texas to Tennessee. Talavera’s father and uncle headed the organization.

“In the course of the investigation, FBI agents learned that Talavera, Sr. made representations that he had family members, both in corrections and with probation, that could assist him with obtaining information for the benefit of the Talavera DTO,” according to the criminal complaint against Talavera. “Talavera Sr. also claimed to have an attorney friend who could get Talavera Sr. any information on any case for a fee of several thousand dollars.”

The FBI, meanwhile, received a tip that Talavera provided the drug trafficking organization with information and protected drug or money shipments.

In July 2021, the FBI instructed a “confidential human source” to contact Talavera’s father about a car that had been impounded in Live Oak County.

The source, who is identified in the criminal complaint as “CHS 1,” claimed the car had been transporting cash.

“Talavera Sr. agreed to obtain the registration information of the vehicle,” according to the criminal complaint. “Talavera Sr. told CHS 1 that Talavera Jr. assisted the Talavera DTO in the past.”

Agents contacted the Texas Department of Public Safety, which determined that someone with access to Talavera’s account had run the license plate through the Texas Law Enforcement Telecommunication System.