It’s taken the better part of a decade, but the three La Joya ISD high schools’ varsity sports teams are becoming more and more competitive against their District 30-6A rivals; McAllen Memorial, McAllen High, Nikki Rowe High School and the Mission Eagles. Case in point, the Juarez-Lincoln Huskies’ football team qualifying for the playoffs for the first time in school history, the La Joya Coyotes’ baseball team earning a share of the district title for the first time since the three-way split of La Joya High in 2008 and the Palmview Lobos’ football team making it into the playoffs in back-to-back seasons for the first time in school history.

Even so, the McAllen schools still managed to dominate the district in sports such as football, basketball, volleyball, softball, track and field and swimming. But should the current trend of the Coyotes, the Lobos and the Huskies claiming more of the highly coveted playoff berths and district titles for themselves continue, that may not be the case for too much longer. 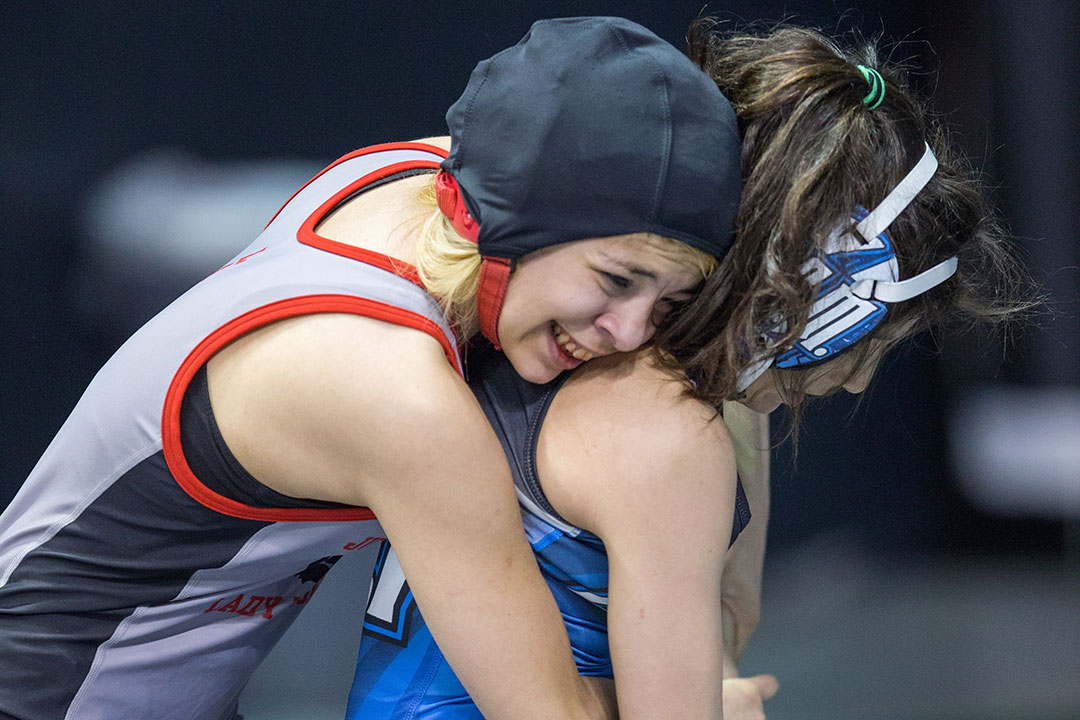 But before we continue looking ahead to what the future holds for the three La Joya teams, let’s take a look back at the 2015/2016 school year and the Top 10 LJISD Sports Achievements of the Year.

As a two-time state silver medalist, Juarez-Lincoln Lady Huskies’ wrestler Leslie Oliva (95 lbs.) went into the UIL’s 2015/2016 State Wrestling Tournament with her sights on bringing home the gold. While she had to settle for the bronze this year, she still became the first three-time state medalist in Juarez-Lincoln High School history. Oliva, who took that the silver medal at Regionals, watched as her teammate Jesenia Gaytan (215 lbs.) took the regional championship and went on to earn a state medal in her weight class when she placed fifth.

The Juarez-Lincoln Huskies’ and Lady Huskies’ powerlifting teams both had state qualifiers this year. For the Lady Huskies, Valeria Banda and Jessenia Gaytan not only made it back-to-back trips to the state meet but they both placed seventh in their respective weight classes. In addition, Banda set a regional record for the 148 lb. weight class with her 400 lb. squat. As for the Huskies’ boys, they had four state qualifiers with Mauro Vargas bringing home the bronze medal. Robert Hernandez, Julio Garcia and Fernando Hernandez were the other Huskies boys’ state qualifiers.

Palmview Lobos’ wrestler Gustavo Arpero not only qualified for the UIL State Tournament by taking the Region IV championship in the 195 lb. weight class, but he won his opening match against Ryan Flores of Midlothian (Dec. 5-1) and his second round match against Matt Dean of Humble Kingwood (Fall 3:48) to earn a sixth place medal at state and end his high school wrestling career with a 21-7 senior season.

For the third year in a row, the Palmview Lobos’ baseball team advanced into the third round of the playoffs. And for the third year in a row, they saw their season come to an end at the hands of a Laredo team. Even so, earning a three-way tie for the District 30-6A title, defeating Eagle Pass two-games-to-one to earn their third bi-district championship in as many years and defeating Brownsville Hanna two-games-to-one to earn their third straight Area championship all add up to a very successful season for the Lobos.

Last year the Juarez-Lincoln Huskies saw their season come to an end in the third round of the playoffs when they lost to eventual state champions Brownsville Rivera 2-1 on penalty kicks. This year the Huskies avenged that loss when after defeating Laredo United in the Bi-district round they went on to defeat Rivera 3-0 in the Area round. While the Huskies lost to the eventual state semifinalists Brownsville Lopez 2-1 in the Regional Quarterfinal round, their Bi-district and Area championships earned them a spot in this year’s top 10 list.

The La Joya Coyotes boys’ soccer team finished up their District 30-6A schedule in third place with a 7-5 record and 22 points. They went on to defeat Laredo LBJ 3-2 in the Bi-district round of the playoffs before having their season come to an end in the Area round at the hands of the same team that defeated the Huskies in the very next round, Brownsville Lopez. While the 4-1 loss to the Lopez Lobos prevented the Coyotes from advancing into the third round of the playoffs for the first time since the 2009 season when they advanced into the fourth round, their Bi-district championship made their 2015/2016 season one to remember.

For the first time since the three-way split of La Joya High School, the Coyotes’ baseball team won a district championship. Yes it was a three-way District 30-6A title as the Coyotes, the Lobos and the Bulldogs all ended the district schedule with identical 9-3 records, but it still counts. Especially when you take into account the fact that the Coyotes had to win seven of their last eight games just to claim a share of the district crown. While the Coyotes failed to extend their season past the first round of the playoffs when they were swept two-games-to-none by Del Rio, they’ll always be able to hold their heads high as district champs! And the fact that they accomplished this after having lost their head coach to a promotion and their new coach was not named until one week prior to the start of the season, makes this accomplishment Top 10 worthy.

For the first time in school history the Juarez-Lincoln Huskies football team qualified for the state playoffs. They did so by defeating the Palmview Lobos, the Mission Eagles and the La Joya Coyotes to close out their District 30-6A schedule on a three-game winning streak.

While the Huskies lost their Bi-district round matchup against the Laredo United Longhorns, claiming the La Joya City Championship and qualifying for postseason play are both milestones that made their 2015 football season one to remember.

In putting this list together, each school’s athletic coordinators was asked to provide us with what they consider to be their respective school’s top sports achievements of the year. The fact that La Joya High head football coach and athletic coordinator Reuben Farias put his athletes that made the top 10% of the La Joya High graduating class at the very top of his list inspired us to honor that commitment to academic as well as athletic excellence by including those students’ names, their class rank and the sport they play here. Darren Garcia #2 – Wrestling, Mark Cantu #3 – Swimming, Orlando Garcia #15 – Swimming, Daniella Cantu #21 – Basketball , Alejandra Lopez #26 – Basketball, Clarissa Mendiola-Gonzalez #30 – Basketball, Esteban Prado #34 – Baseball, Brando Ramos #40 – Football and Alexandra Soliz #47 – Softball.