The priest who set up the meeting to talk about the proposition to create a healthcare tax district in Hidalgo County didn’t show up.

Catholic Priest Jerry Frank, who has been one of the county’s biggest proponents of the proposed healthcare district, didn’t show up for the meeting he scheduled Tuesday, Sept. 13 at St. Paul’s Catholic Church in Mission to talk about the proposition. 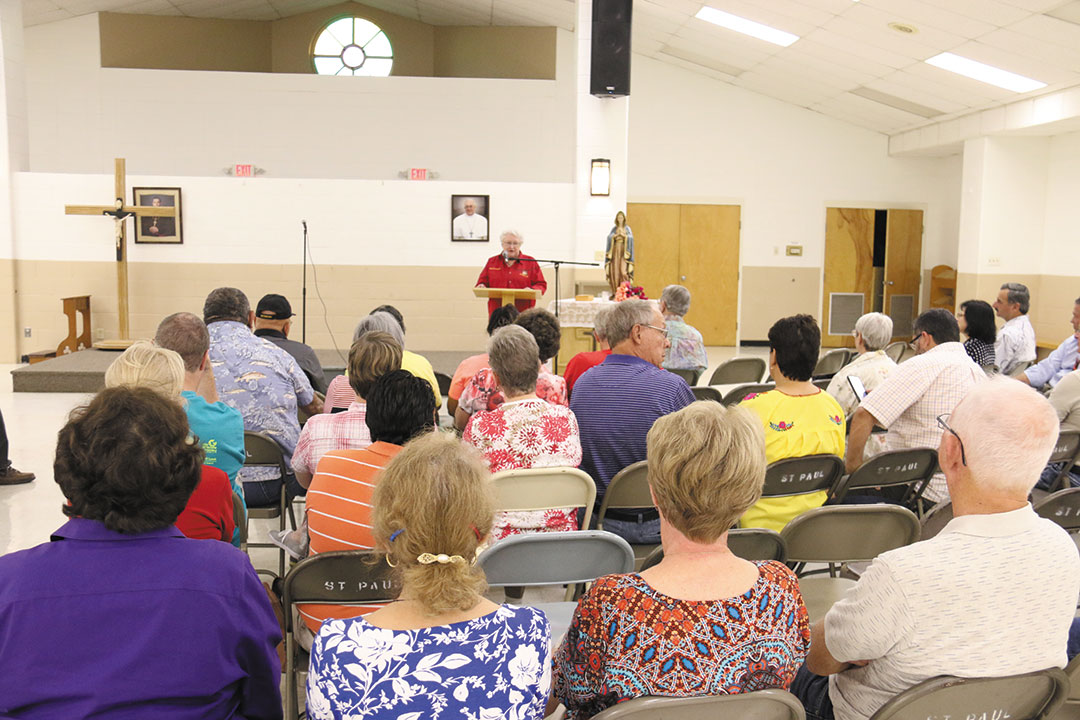 Priest Gregory Kuczmanski of St Paul’s Catholic Church said he got into a heated argument last week with Frank on the telephone.  Frank told him he wanted the meeting to be only for parishioners of the church.

“And I said, ‘No way,’” Father Gregory explained to the audience of over 100 people Tuesday night at the St. Paul’s Parish Hall. “I figure for this serious item, anyone who lives in Hidalgo County has the right to attend.

To this, Frank responded, “We’re not coming.”

Members of the OWLS (Objective Watchers of the Legal System) group said Frank cancelled because he didn’t want anyone who is opposed to Prop. 1 to have an opportunity to speak and share an opposing viewpoint.

Frank has scheduled meetings to make his presentation promoting Prop. 1 at 13 Catholic churches all across Hidalgo County.  When the OWLS members have shown up at the meetings, he has done everything he could to bar them from speaking, according to OWLS member Fern McClaugherty.

Kuczmanski, explaining why he felt anyone who wanted to should be allowed to speak up at the meeting and share their viewpoint and share information about the proposition, said, “Before I vote, I’ve got to have information to make an honest vote.”

Mission Mayor Norberto “Beto” Salinas, a vocal opponent of Prop. 1 who has attended some of these church meetings, was asked to share what he knows about the proposed healthcare district. He explained that the county judge and county commissioners who are supporting the healthcare district are saying they need to impose a tax rate of 8 cents per $100 valuation on homes and properties in Hidalgo County, which would raise about $24 million annually to take care of indigent health care, including reimbursements to local hospitals that incur much of these costs.

“I think they can keep it within their own (county) budget, if they’re going to spend $20 million per year,” the mayor said. “They do not need to spend any more; $20 million can get them a long ways to take care of most of the indigent program that this county needs. But, of course, that is not what the hospitals are asking for…. They’re asking the commissioners’ court to start this hospital district.”

He explained, the district tax will start at 8 cents with a cap at 25 cents, if Prop. 1 is approved in November, however, he said the tax will quickly be maxed out at the 25-cent cap, and this can be done simply by a vote of the new healthcare district board, without voter approval. He also predicted that they would then try to get voter approval to raise the tax rate cap to 75 cents, as it was proposed two years ago when voters narrowly defeated the hospital district proposition.

A tax rate of 75 cents would generate $260 million annually for the healthcare district, Salinas said.

“This is what they really want,” he said. “This hospital district is going to be a nightmare for the county.” Homeowners with a home valued at $200,000 would have to pay $1500 more per year.

“It’s just going to be too much money.  I don’t think people can afford to pay these outrageous taxes.”

DHR (Doctors Hospital at Renaissance) and every other hospital in the county is making money, Salinas said.

A man in the audience asked the mayor to explain why in 1985 Gov. Mark White said hospital districts along the border would not be a good idea. Salinas said, Gov. White appointed him to a committee to investigate how to deal with the indigent program. 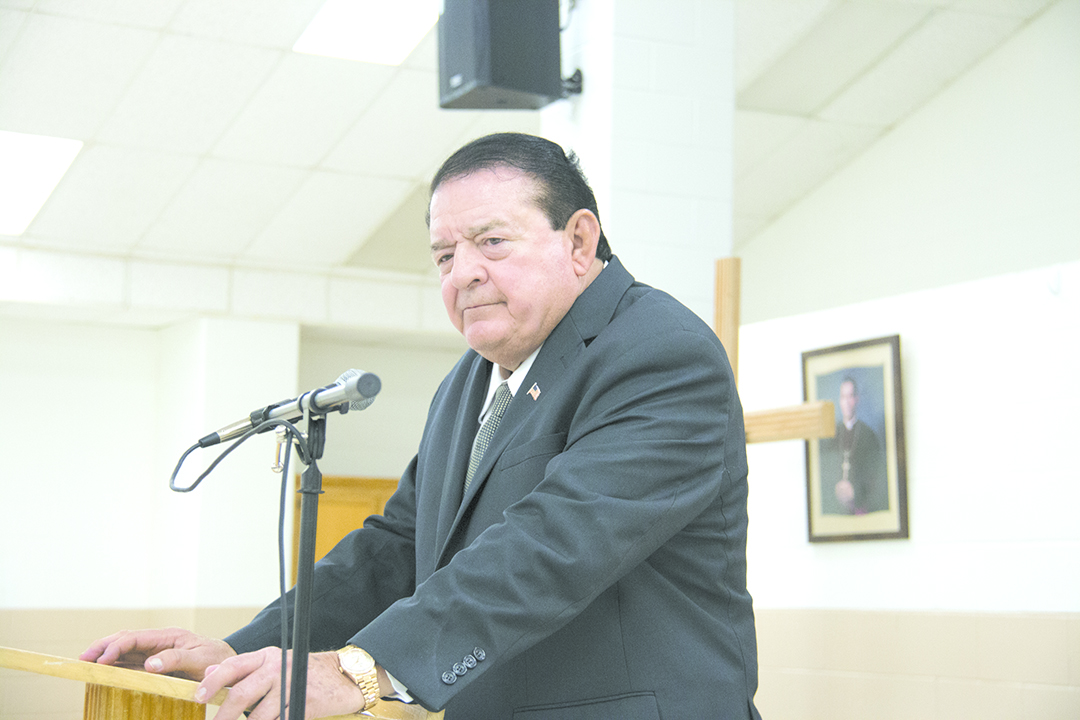 “We had a cap of 10 percent, but our legislators and State Sen. Juan Hinojosa did away with the cap,” Mayor Salinas explained. “Now Hidalgo County is responsible for 100 percent of the indigent program. We are trying to defeat the hospital district and stay with the 10 percent cap that the county has had in the past.”

The county’s budget today is close to $200 million, so with the 10 percent limit in place, the county would need to appropriate $20 million for indigent care under the former rule.

A woman in the audience said, “Mayor, I don’t want to lose the medical school.”

To this the mayor responded, “The school is being funded and has a lot of money.”

Another woman stated, “UT has the second largest endowment in the nation, so don’t let them fool you.”

Bloomberg reported in early 2015 that the University of Texas System endowment fund, which helps fund the school’s operations was valued at more than $25 billion, though since that time it has dropped to around $24 billion, according to the Dallas Morning News.

Dr. John Guerra said the other medical schools in the state are all located in large metropolitan areas where there are sufficient people to support it. It’s the job of the University of Texas to fund the medical school, not our job, Guerra added.

OWLS member Fern McClaugherty said people have told her, with tears in their eyes, they are making payments on their taxes and they cannot afford to pay any more.

“Tonight is the first time we have been able to tell our side of the story as taxpayers,” McClaugherty said.  “We do want to take care of the indigent, but not at the cost of taking the poor people’s homes.” She said 35 percent are making payments on their taxes and over 80 percent of people are on fixed incomes, which means they don’t get any more money to pay increasing taxes.

Sharyland Schools just went up four pennies on their tax rate, she said.

“Every one of these (taxing) entities every year we have to worry which one is going up.  And if they put this on us, this is another tax bill that will start at 8 pennies…and then it will take no time for it to go to the 25 cents… and that’s not going to be enough,” she said. “They tried to get it in 2014 – the whole enchilada – 75 cents, and I guarantee you they will go up to that.”

A doctor who said he is affiliated with Doctors Hospital at Renaissance told the audience, “The hospitals are going to always want more money…Once you activate one of these hospital districts, they’re there to stay; they don’t go away. They just get a bigger and bigger bureaucracy.

The doctor added, this has nothing to do with the medical school.

“The medical school is here; it’s funded by the state.

“I guarantee you these hospitals are not losing money. They’re getting bigger and they’re making plenty of profit…. It is unfair to tax property owners to take care of the indigent patients.”