Changing the culture of a program is a tall order; the team needs to buy-in from the top down, coaches and players alike.

That is the challenge the Mission Eagles and new boys head basketball coach Peter Morales are facing as he takes over a program that hasn’t made the postseason in eight years. 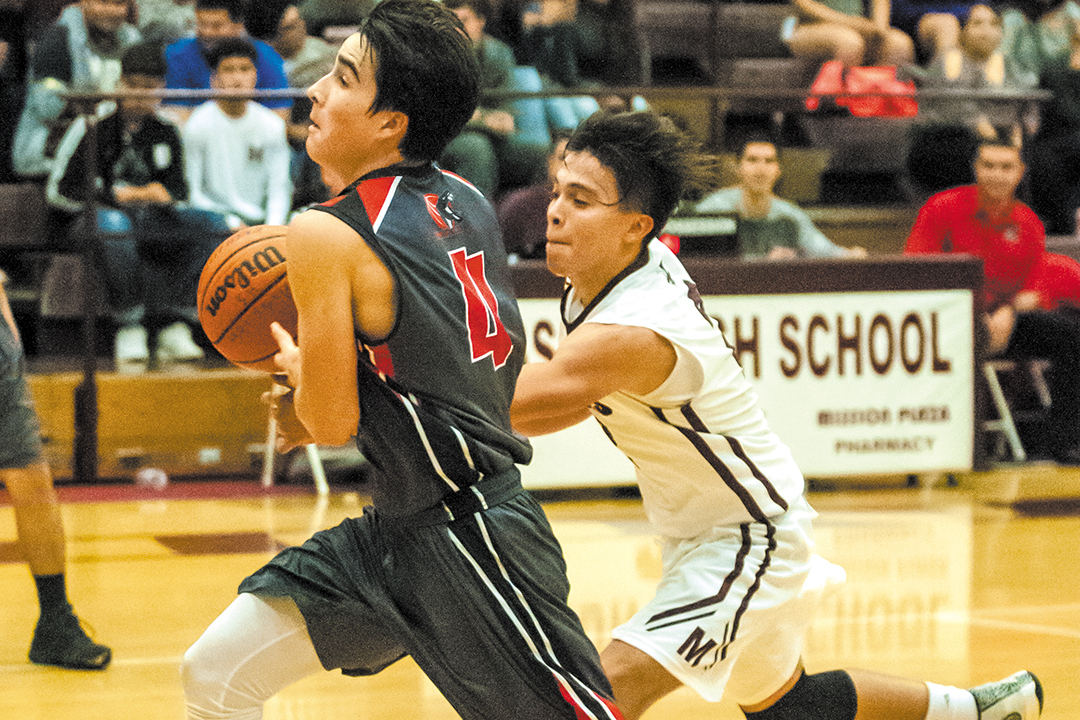 Mission’s Oscar De La Garza goes for the block as Sharyland Pioneer’s Andrew Ogletree drives to the basket for a layup during the second quarter of the Diamondbacks’ non-district 47-29 win over the Eagles. Progress Times photo by Luciano Guerra

Morales now leads the Mission basketball program but is no stranger to running a team and turning them into contenders, winning district championships as a head coach at Coronado High School and Bowie High School in El Paso.

Although the Eagles are off to a 0-4 start early in District 30-6A action, Morales believes his team has what it takes to pick up some wins while changing the culture at Mission High School.

This year’s Mission Eagles squad is led by seven seniors and the team’s size inside. With 6’6” senior center Gio Solis and junior posts Juan Escobedo and Tomas Garcia, listed at 6’5” and 6’4”, the Eagles like to attack opponents inside. After losing starting senior point guard Oscar De La Garza two months ago, the Eagles have relied on the play of their big men in games, including senior forward Rudy Trevino.

The Eagles began the season by winning five straight games, including four at the Edcouch Elsa Basketball Tournament in November to qualify for the championship game before ultimately falling to La Joya. During the five-game win streak, Morales’ squad throttled Idea Academy 54-12 and followed that up by winning two overtime games against PSJA Memorial 45-41 and PSJA Southwest 49-46.

“We’re trying to establish the inside game,” Morales said. “We’re not as talented as other teams and we have to make up for that with our hard work and playing hard and getting those 50-50 balls because those make a difference. I feel that if we do the little things we have a chance to win.”

After the team’s most recent loss to perennial hoops powerhouse Nikki Rowe on Tuesday night, Morales said he liked the way his team fought, but wants to see that effort from his team from jump ball to the final buzzer.

“I thought they came out with more fight. We have to come out with that from the beginning. We just have to get better,” Morales said. “Bottom line is guys [have] got to lay it all on the court and we [have] got to get better. Our practices are intense, our practices are tough. They’re doing it in practice and we just have to find a way to translate that into games.”

With eight games remaining in District 30-6A action, the Eagles are determined to turn things around in 2017. The Eagles next opportunity to pick up a district win is tonight at 7:30 as they visit the Palmview Lobos, who are currently 2-1 and in third place in 30-6A.