Following what he described as “pushback” from his constituents, State Sen. Juan “Chuy” Hinojosa, D-McAllen, filed a bill Feb. 10 aimed at blocking the Agua Special Utility District board of directors from hiring elected officials.

If passed, State Bill 814 would prevent Agua SUD, which provides water services to nearly 15,000 residents in Western Hidalgo County, from employing elected officials who oversee the schools and cities where utility board members work. 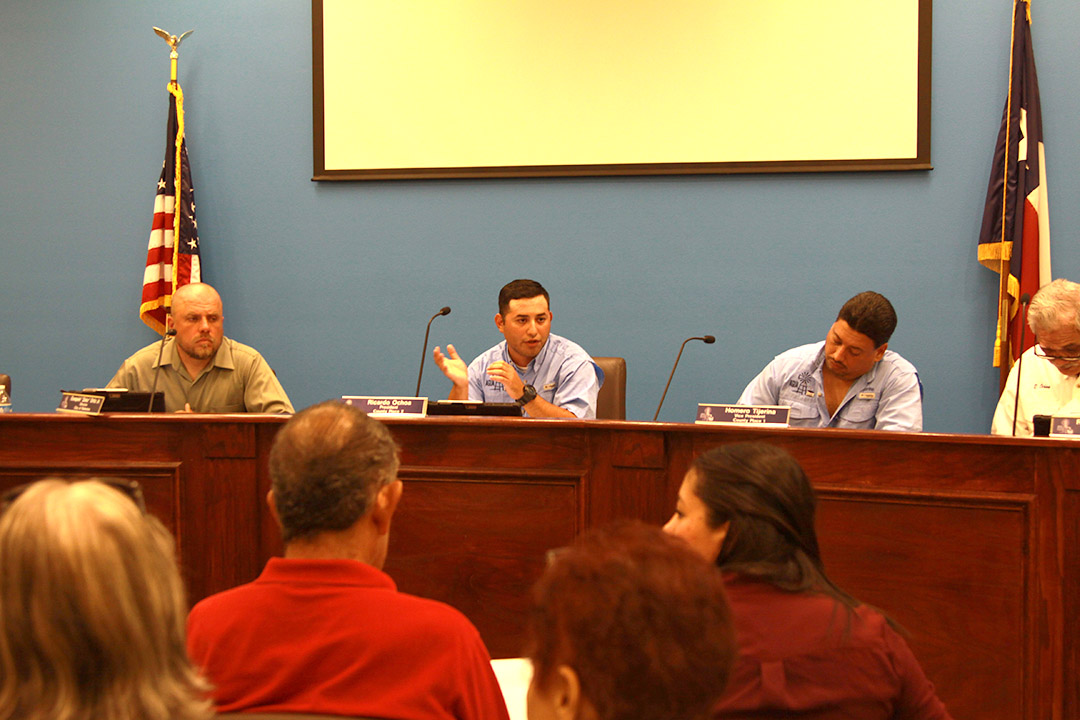 The Agua SUD board of directors at an October 2016 board meeting.
Progress Times photo by Jose De Leon III

According to Hinojosa, the bill was filed after his office was contacted by a “number” of constituents who were worried of a potential conflict of interest concerning several hires in Agua SUD related to the La Joya school district.

“People were concerned the majority of board members who worked for the La Joya school district were hiring school board members —their bosses—to work at Agua,” Hinojosa said. “Potential conflicts of interest, whether perceived or real, have perceptions of reality.”

The bill would affect Agua SUD employees Oscar “Coach” Salinas and Armin Garza, both serve on the La Joya ISD school board as president and vice-president, respectively.
In a statement to the Progress Times, Hernandez said he and the Agua SUD lawyers are reviewing the proposed legislation before determining how to proceed.

Salinas, the Agua SUD outreach coordinator, said he would respect the outcome of the bill even though he doesn’t understand the need for it.

“Why is this directly targeting Agua SUD,” Salinas asked during an interview Tuesday. “Why is he specifically looking at the school district? It’s hard to understand where he’s coming from since in my position, I’ve had no influence or applied pressure in contracts, hiring or in any work related to Agua SUD.”

Armin Garza works as the Agua SUD Billing Manager and said he was surprised by the legislation.

“I’ve only held office [in La Joya ISD] for three months and there’s no just cause for someone filing legislation to get rid of my job,” Garza said. “I don’t think they have an idea of who will be affected by this.”

Hinojosa was among the attendees of an eventful September 2016 Agua SUD board meeting where then-Executive Director Julio Cerda resigned from his position.

As previously reported, the board of directors went through a restructure at the same meeting as then Board President Ricardo Ochoa was stripped of his title and replaced by Hernandez.

The meeting was heavily attended with most of the spectators continually interrupting the board meeting to voice their disapproval of the changes.

Salinas believes the bill was drafted as a result of that meeting. He said he only applied for an Agua SUD position because its office is close to his home in Sullivan City. He said finding local work is an issue for other residents living in La Joya.

“We need to understand that for many people near the school district, a job in Agua SUD is one of the places for employment,” Salinas said. “I don’t know what will happen to my job but I’ll continue to do it on a daily basis.”

Sen. Hinojosa said in regards to employees such as Salinas, the bill is drafted in a way that they are not eligible to be employees or consultants hired on a contract basis.

“This is about public policy and oversight,” Hinojosa said. “Agua SUD is a public entity that receives hundreds of millions of dollars in public funds. It’s not unusual for the state to file legislation to amend the law or deal with issues like this when they arise.”

The bill also calls for Agua SUD directors be elected from the cities of Mission, Palmview, Peñitas, Sullivan City and La Joya to serve on the board with the remaining two positions to be filled by directors elected at-large who do not reside in any of the previously mentioned cities.

If passed, the bill would go into effect Sept. 1.