Officials of two Rio Grande Valley Baptist Church organizations have confirmed negotiations are underway that may lead to Mission becoming the next site of a temporary holding center for unaccompanied minor immigrants.

If plans come to fruition it could mean about 300 new jobs in the city, one official said. But leaks about the proposal have already prompted concerns from  some area residents. 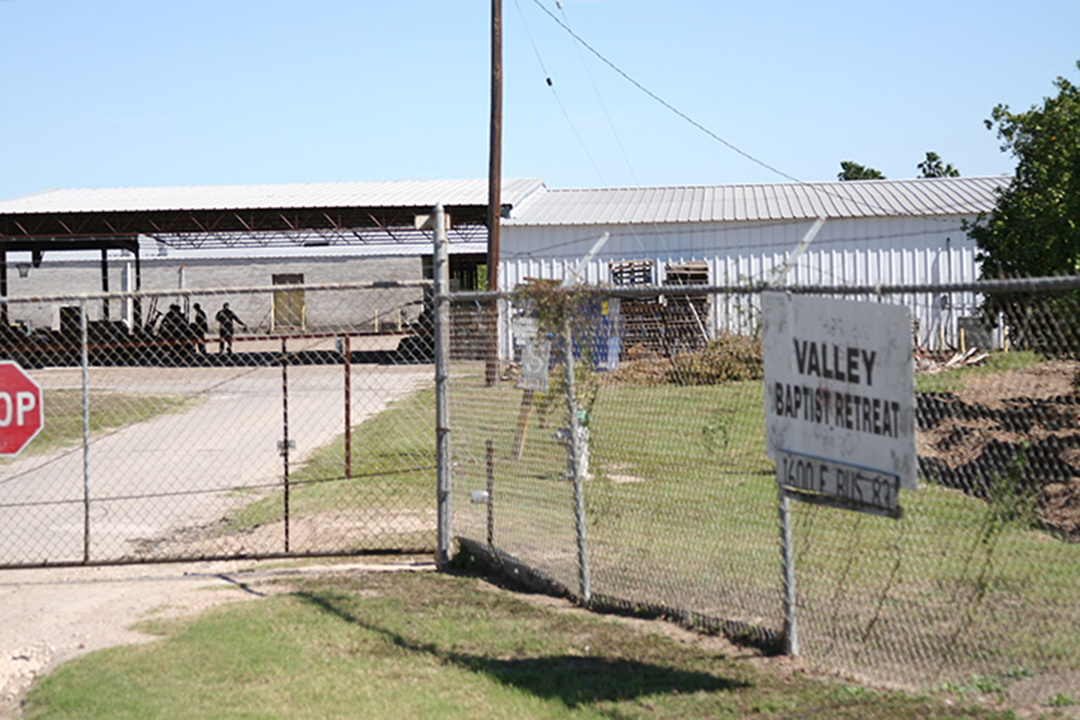 The Valley Baptist Retreat, operated by the Rio Grande Valley Baptist Association on Stewart Road south the Bus. 83 is being considered by the U.S. Office of Refugee Resettlements as a site to house between 85 and 100  unaccompanied minor immigrant girls.
Progress Times Photo by Joe Hinton

Othal E.Brand Jr., executive director of the Harlingen-based Valley Baptist Missions Education Center, confirmed Tuesday his organization has signed a lease agreement with the Valley Baptist Retreat of Mission to house between 85 to 100 unaccompanied minor females. Valley Baptist Retreat is located on Stewart Road just south of Bus. 83 in an area surrounded by recreational vehicle parks that cater to Winter Texans.

Brand said the lease agreement is contingent on the outcome of negotiations between the U. S. Office of Refugee Resettlements (O.R.R.) and the Harlingen-based Baptist Child and Family Services or BCFS. The BCFS already operates temporary housing facilities in Los Fresnos, Harlingen and San Benito, said Robert Cepeda, Director of Missions for the Rio Grande Valley Baptist Association and operator of the Valley Baptist Retreat.

For the past 30 years the Stewart Road retreat was a way station for missionaries heading into Mexico but Cepeda said the number of missionaries traveling south of the border have been greatly reduced by drug related violence in Mexico.

Cepeda said for several months Baptist Church officials have been negotiating with him to use his site as a temporary housing facility for the overflow of unaccompanied immigrant minors but that in January he was asked if the site could become a permanent facility.

Cepeda said he recently received a call from an area RV park operator who was concerned about immigrants roaming area streets and neighborhoods and coming and going as they please.

Cepeda said by the time the minors reach his facility they are no longer undocumented and are being housed temporarily while their families in the U.S. are located and the minors can be transported to them.

“It will be a secure facility and these kids know someone is trying to find their family,” Cepeda said Tuesday in a telephone interview. “They’re getting three meals a day. They’re wearing clean clothes. They’re going to class everyday on site. They have recreation facilities and are able to attend religious services of their choosing on site and so those kids don’t really want to go anywhere else because if they leave who’s going to help them get back to their families?”

Brand said he expects Baptist Child and Family Services to inform him of the results of its negotiations with the O.R.R. possibly as soon as next week.

“We’re right smack in the middle of negotiating with them right now,” Brand said in a telephone interview Tuesday.

B.C.F.S. Executive Director, Andrew Carter, could not be reached for comment prior to press time to answer an inquiry about the status of its negotiations with the O.R.R.  The O.R.R. required queries submitted in writing via the Washington, D.C.-based public relations firm that handles its media inquiries but no response had been received as of press time.

Brand said the Baptist Association operates the largest minor holding facility in the U.S. in Harlingen and that the Mission site could mean up to 300 new jobs for the city.

Brand said the Mission site was chosen to house female minors because the O.R.R. seems to have difficulty finding suitable facilities for them.

“We only work with unaccompanied kids. We don’t work with families, that’s I.C.E., that’s totally different than what we do,” Brand said referring to U.S. Customs and Immigration Enforcement.

Brand, who is running for mayor of McAllen, said he considers working with immigrant minors gratifying work.

“When I was growing up our church used to go down to Mexico and Central America to do mission work in the villages to help those people,” Brand said.  “Well the Bible says in every curse there’s a blessing. And the blessing for us is that with all the illegals that are coming up here now we minister to them right here. So we don’t have to travel anywhere. And we have an opportunity to invest in them financially instead of investing in a bunch of travel expenses. We’re actually able to do a lot more with the kids that are here.”