Concerns raised over spread of hydrilla in La Joya lake

Officials in the city of La Joya are growing concerned with an invasive plant that is spreading in the city’s 115-acre Walker Lake Reservoir.

About one third of the lake, which is actually two reservoirs located alongside Kika De La Garza Boulevard, is covered in hydrilla, an aquatic weed that can disrupt boating and fishing. That’s according to City Administrator Mike Alaniz, who says his office has been receiving calls from residents to express concerns over the hydrilla. 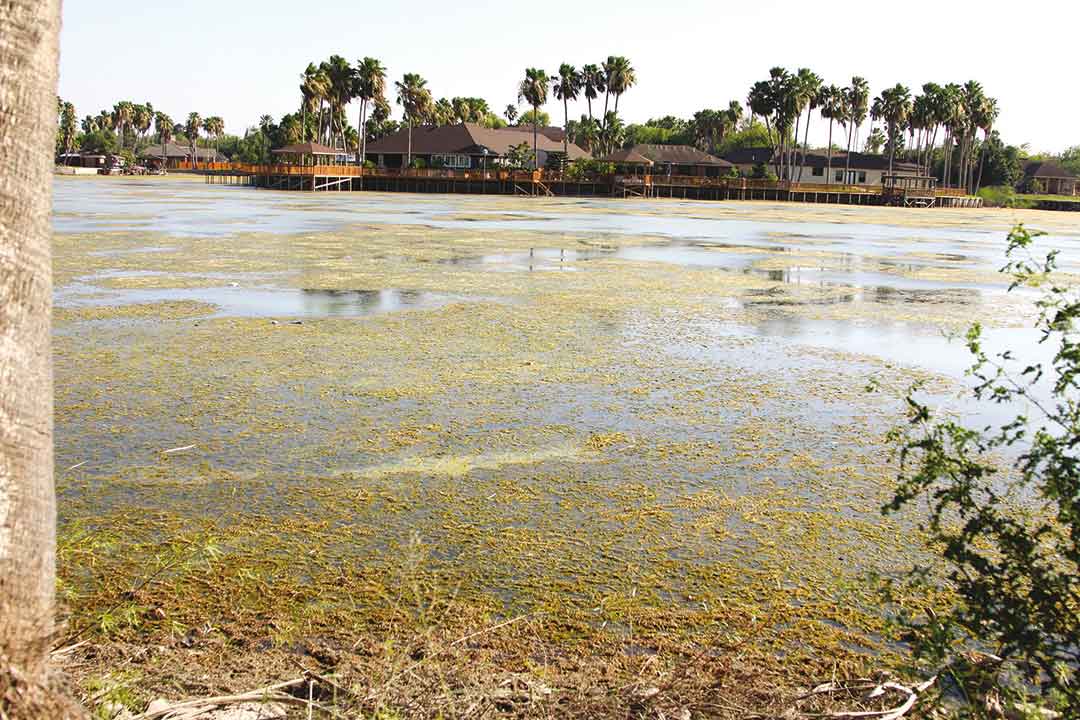 According to the University of Florida’s Center for Aquatic and Invasive Plants, the hydrilla is a freshwater plant with stems that can grow up to 25 feet long. Hydrilla grows quickly and creates dense mats that can block out sunlight and harm native plants and its density can also kill fish by decreasing oxygen levels. Hydrilla is native to Australia, Asia and Africa and is believed to have made its way to the U.S. as an aquarium plant. Hydrilla is often spread by boaters as hydrilla fragments can cling to boats and trailers.

Alaniz said residents of the Palm Shores and The Coves subdivisions -which surround the lake – have called him wanting to know how the city plans to handle the hydrilla, questions Alaniz said the city cannot answer.

“The city has no involvement to the lake itself,” Alaniz explained. “We keep getting calls from residents but the best we can do is direct them to the Walker Lake Homeowner’s Association and the Hidalgo County Irrigation District No. 6 as the lake is owned by those two entities with the irrigation district controlling the water.”

Joe Aguilar, general manager for the irrigation district, said in a phone interview Monday that the district is working with Texas Parks and Wildlife on the issue but would not provide further details.

John Salinas, president of the Walker Lake Homeowner’s Association said even with the hydrilla, the lake is still available for recreational use for the residents who reside in the subdivisions in the area.

“The hydrilla isn’t preventing anyone from using the lake, but it is spreading,” he said. “We have to sit back and wait to see what the water district has to say about it.”

Among the residents concerned over the hydrilla is Mark Pittman who lives in the Palm Shores subdivision. Pittman, who has lived in that subdivision for nearly 20 years, said he’s had to take matters into his own hands and personally contacted the county biologist for help on the issue.

“Everyone I know wants to get rid of the hydrilla because we’re all worried  it could affect our home values,” Pittman said. “It’s a plague, we’ve let it get this far out of control but we can take care of it. It’s not impossible, people just have to act on it.”

According to Pittman, the county biologist offered Pittman a list of three chemical treatments (Sonar A.S., Ultra Pondweed Defense and Clipper) that can be sprayed on the hydrilla with minimal damage to the water.

The biologist, Tony Henehan with the Texas Parks and Wildlife Department, said in a phone interview Tuesday the herbicides should only be used as a last resort if mechanical treatment, the physical removal of the weeds, doesn’t work.

Henehan said all the herbicides would need to be used in “multiple treatments” on the hydrilla but can only be used through a special permit from the Texas Parks and Wildlife Department. Pittman said he shared that list of herbicides with the irrigation district and hopes the district acts on it.

Aguilar could not provide confirmation as to whether or not he received the list as of press time.

Pittman said he hopes action is taken on the matter soon.

“If we follow what the biologist is recommending I’m sure it’ll be a way of getting rid of the hydrilla,” he said. “We have to tackle it now before it gets so out of hand it can’t be taken care of.”