The executive director of the National Butterfly Center is seeking answers after she found work crews on her property clearing trees and brush that she said is endangering protected wildlife in the area. The Army Corp of Engineers has admitted responsibility only setting surveyor stakes on the property.

Marianna Treviño-Wright said she discovered the crew Thursday morning while doing a routine check of the 70 acres of private property owned by the National Butterfly Center located south of the Rio Grande River levee. 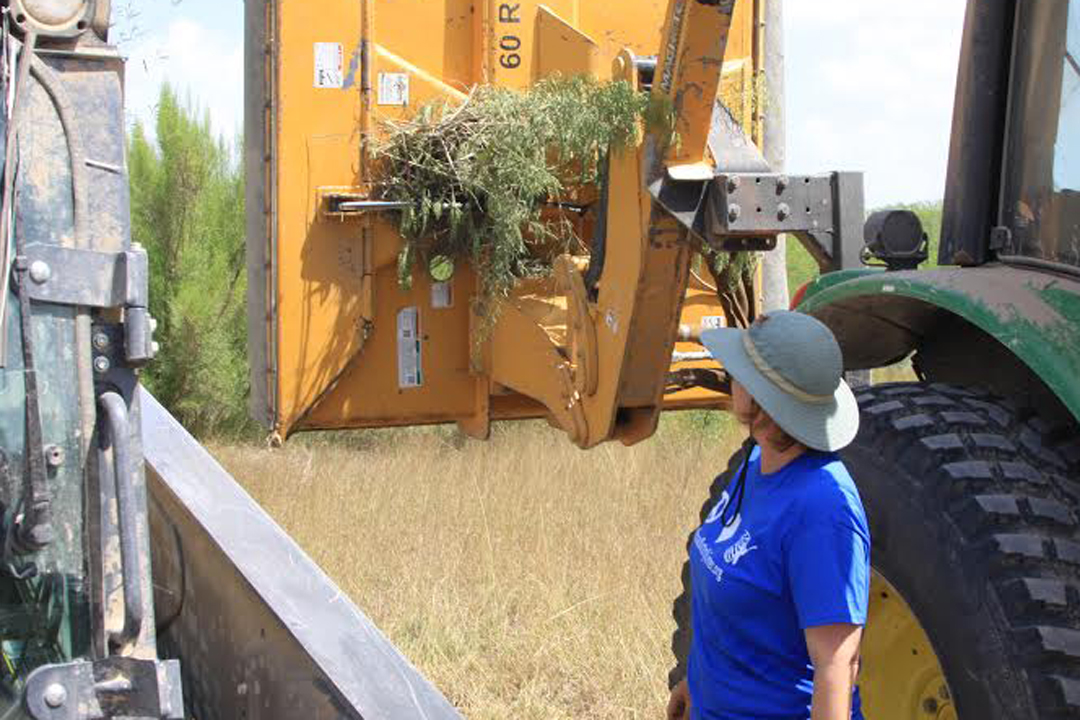 The crew of five people, Treviño-Wright said, had chainsaws, two mechanized brush cutters and other pieces of machinery. She confronted the crew from the Alaska-based Tikigaq Construction LLC firm who told her they were on orders from U.S. Customs and Border Protection clearing land for the border wall.

Treviño-Wright said she ran the crew off the property. After the crew left, Treviño-Wright surveyed the area, noticing two surveyor’s stakes spaced 150 feet apart on the levee, an “X” staked to the road that leads to the Rio Grande River and several fallen or damaged trees.

“We were not notified of any work plans, nothing to give us warning about this construction,” she said. “Who knows how long they’ve been here working.”

She pointed out two Texas Tortoises – a state protected animal that is listed as a threatened species by the International Union for Conservation of Nature – that were in the same spot where the brush cutters were.

“They could’ve been killed because of this,” she said. “Just about every type of wildlife is here, this habitat is rich and diverse. We can only assume everything that can be found in south Texas is here. What will happen to them if the wall is built here?”

Construction could begin next January, the article said.

Treviño-Wright said such construction on nature centers like the NBC and the Santa Ana Wildlife Refuge would create an “environmental disaster.”

“Less than five percent of our native habitat remains in Texas for our native wildlife,” she explained. “Birds, butterflies and other animals are looking for natural landmarks as guides when they travel, not unnatural ones that obstruct their movement. Construction will desiccate them.”

Treviño-Wright said the person supervising the crew Thursday was Peter Sydow, supervising manager of Tikigaq Construction LLC. According to its website Tikigaq Corporation of Point Hope, Alaska, is an Alaska Native Village Corporation, which was established in 1971 under the Alaska Native Claims Settlement Act.

Contacted via phone Friday by the Progress Times, Sydow declined to comment on this story and referred all questions to CBP.

When reached for comment, CBP spokesperson, Carlos Diaz, forwarded via email an unattributed statement from the U.S. Army Corps of Engineers. In the statement the corps said it was in charge of the project. But the corps denied performing any “drilling, clearing or tree removals in the vicinity. The contractor did place X markings on the ground surface as targets to be visible from an airplane to do mapping.  The contractor also placed wooden stakes with flagging at proposed boring locations. Boring locations are typically located at ramps crossing the levee.”

Diaz said the corps was not accepting requests for interviews at this time.

For now, Treviño-Wright said she’ll keep a closer eye on her property to avoid a similar situation.

“I’m going to have to do more frequent welfare checks of the property,” she said. “Border Patrol has an important job to do but this is unnecessary. We know the wall doesn’t stop anyone and they know it too, that’s why there’s gaps and gates. The wall is intended to be a funnel to make it easier for border patrol to monitor and apprehend. That’s fine, just don’t put it on my property.”