MCALLEN – A soft applause rippled through the few people remaining in the audience following Hidalgo County Judge Ramon Garcia’s following words: “I look forward to working with you guys.”

That statement came about four hours into Tuesday’s Hidalgo County Commissioners Court meeting. It was aimed at Jacobs Management Consultants after the two sides came to an agreement to move forward with a $4.5 million contract appointing Jacobs as project manager for the $141 million new Hidalgo County Court project. The vote to move forward with Jacobs and take the next steps toward construction of the courthouse back on a green light was unanimous. 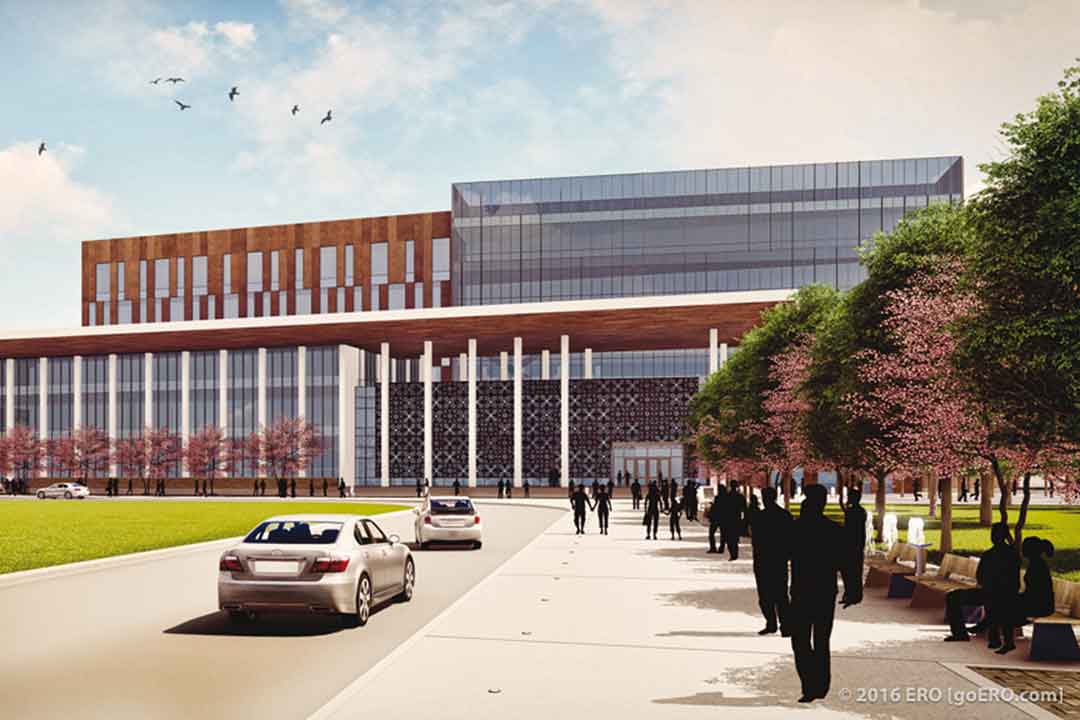 Jacobs and the court had stalled over the agreement after Jacobs representatives wanted to include language in the contract that would have required the county to pay the consultant additional fees if the project surpassed the 52-weeks the project was expected to take to complete.

The county quickly balked at that. On Tuesday, however, Jacobs came back and agreed to the county’s terms that there would be no additional costs if their services were needed past the time the project should be completed. Jacobs will also provide monthly reports and status updates on construction with each monthly invoice submitted to the county, according to the agreement approved Tuesday.

Jacobs was the second pick by the commissioners court and the doors opened for the Dallas-based company after the first choice company, Dannenbaum Engineering, whose offices in Houston, Laredo, San Antonio and McAllen were raided by the FBI on April 26. The following day, Garcia announced he planned to recommend to the court to cease negotiations with Dannenbaum and start working the with second highest-ranked firm.

“The county understands that the FBI investigation is not tantamount to a determination of any wrongdoing on the part of Dannenbaum,” Garcia said in a prepared statement April 27. “However, given the magnitude of this project, the taxpayers deserve a degree of certainty that any contracts entered into will be honored, and this investigation creates some doubt.”

The new courthouse will be more than three times as large as the current approximately 100,000-square-foot building. According to the Edinburg Economic Development Corporation, the building will have offices for the district attorney, public defender, adult probation and others, along with 24 courtrooms and the 13th Court of Appeals. It will also have holding areas for the Sheriff’s Department and other rooms, offices and amenities.

Judge Garcia said he truly believed that the hurdle they had reached would not be overcome.

“There was a point where they were very reluctant to move and I wasn’t going to move from my position,” Garcia told the Progress Times in a telephone interview Wednesday. “Once they saw that the court was pretty adamant and that we were sticking together as a majority, they worked out a fair contract for our taxpayers.”

Garcia said now that the contract is finalized with the program manager, the next phase is to secure an agreement with an architect and then with a contractor. Two architect companies made shorter versions on Tuesday of presentations from offerings they made more than a year ago to the court.

The two architect firms in attendance Tuesday were HDR, an Omaha, Nebraska-based firm that has built 85 courthouses around the country, and HOK, a St. Louis,  Missouri-based firm, ranked No. 4 in the nation in courthouse design in 2016 by Building, Construction and Design magazine.

Garcia said the next step was to dig deeper into both companies’ history and get feedback as well from the newly hired project manager.

“It’s very difficult to just look at people and in 15 minutes make an informed choice,” Garcia said. “This is one phase at a time and now we will get our project manager to work with us and we expect him to go out there and research how well these firms have done their projects and what kind of experience they have.”

Precinct 2 Commissioner Eddie Cantu asked each group’s equally timed presentation the same question, “How much money will be staying here locally?” Both firms responded between 65 and 70 percent.

“It’s always important to try and keep as much of the money locally as possible,” Garcia said, adding that a decision should be made in the next few weeks. “But the main deal is we want to make sure they are qualified. One firm has built about 85 courthouses. In the end we want to make sure we have the right support and have a successful and completed project. I’m happy to be moving forward again.”