Over 150 years later, an estimated 1,000 people joined a processional and protest on Saturday, Aug. 12, to save the historic mission amid concerns the proposed border wall could affect access to the chapel, which is situated just south of the levee that was built to retain the Rio Grande River when it floods. 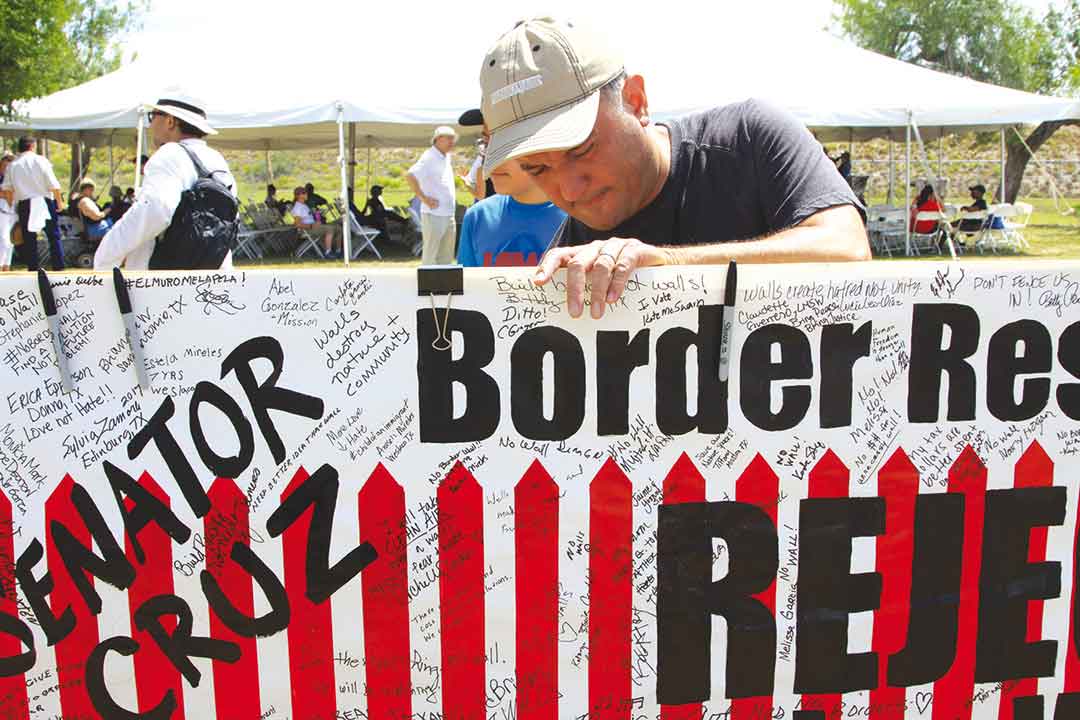 The protest at La Lomita was the first of two last weekend against the proposed border wall with the second protest occurring the following day at the Santa Ana Wildlife Refuge in Alamo. (See related story.)

Several media outlets reported earlier this month plans for 28 miles of border wall in Hidalgo County to be placed on the levees, affecting private landowners and other areas in the Rio Grande Valley such as the Santa Ana National Wildlife Refuge and the National Butterfly Center in Mission. Construction of the border wall could begin in November according to a July 28 Texas Tribune report.

Both areas are home to hundreds of bird and butterfly species, native plants and wildlife.  Environmentalists and nature enthusiasts fear the construction activity alone could destroy some of the native habitat in the vicinity of the wall and disturb the wildlife that makes the area their home.

As a result of the proposed plans, more than 40 local organizations came together to protest the border wall last weekend. Our Lady of Guadalupe Catholic Church parish priest, Father Roy Snipes, supported the protest as he fears the proposed wall could restrict his church’s access to La Lomita Chapel.

According to Snipes, the historical chapel, from which the city derives its name, is still used by the church.

The protest began with a 7 a.m. procession from Our Lady of Guadalupe Church in downtown Mission where attendees participated in a four-mile trek to the mission located 3 miles south of Expressway 83 on FM 1016.

Stephanie Lopez was among the protesters. The 25-year-old Mission resident works at the National Butterfly Center, which received national attention last month when their executive director discovered government contractors trespassing on the center’s property clearing brush in preparation for the proposed border wall in the area.

Lopez said she attended the protest in the hopes of raising awareness about the border wall.

“I’ve met a lot of people who said they didn’t know where the wall is going through. So for people to be here and see how, if the wall was constructed and they were standing on the chapel grounds, and realize they’d be on the other side of it? That’s the big picture for them,” she said. “These are our roots. The river is part of who we are as a community and having a wall here would be a big affliction to us and wildlife. The border wall makes me angry.”

Once protesters arrived at the chapel, they heard from several speakers who emphasized to attendees the importance of the region, the chapel and the river. Speakers included religious leaders such as Snipes and Noor Ahmad, the imam of the Islamic Center of South Texas in McAllen; Efren Olivares, the director of racial and economic justice for the Texas Civil Rights Project in South Texas and U.S. Congressman Vicente Gonzalez, a Democrat who represents the state’s 15th congressional district, portions of which stretch from San Antonio to the Rio Grande River. Gonzalez praised the activists who showed up at the event. He spoke out against the wall and offered alternatives such as developing more technology to aid Border Patrol officials

“The anti-immigrant isolationist rhetoric we continue to hear does nothing more than just generate fear and uncertainty within our county and communities,” Gonzalez said. “This rhetoric is the opposite of everything the Rio Grande Valley stands for.”

Scott Nicol, an executive member of the Sierra Club, estimated that 750 to 1,000 people attended the event. The New York Times, which covered the two events last weekend, estimated 1,000 people participated at La Lomita.

“Border residents oppose the border wall,” Nicol said. “We don’t want to see our community militarized, and we don’t want to see immigrant communities terrorized. So, we’re trying to send a message to our state senators and rest of the country that they need to listen to what we want to have happen here and not impose border walls upon us.”

“The wall is a symbol of racism, the racism that is flowing and brewing right now in state and federal administrations,” she told the crowd. “This is a slap in our face for us who live here. No one ever asked us if the wall is the right thing or if we needed it. With all of you here today, we’re making a stronger symbol than anything that wall could represent. We’re a symbol of love and that is stronger than hate and racism. Together we can fight this.”

Sanchez told protesters the wall, along with the upcoming Senate Bill 4, which she called the  “show me your papers law,” tramples immigrant rights and the best way to combat it would be through more community organization and registering more people to vote.

“People think the border wall will be on the border. They don’t know residential communities, holy grounds and public lands will be cut off from America,” she told the crowd. “We need you to call our senators, we need to let them all know what is happening and we’re against it. It is our land to enjoy, not their land to destroy. The clock is ticking on you.”

Jeffrey Glassberg, president of the North American Butterfly Association and founder of the National Butterfly Center, joined Treviño-Wright onstage. In an emotional speech, Glassberg discussed how his wife, who co-founded the NBC with him in 2000, died three weeks earlier. He told the audience the protest was the first time since her death that he had stepped out of their home in New Jersey.

“She would’ve hated it and done what she could’ve to fight it,” Glassberg said when asked how his wife would have reacted to news of the wall possibly going through the butterfly center.

Salome Welliver, a Mission resident who co-owns the Oleander Acres RV Resort in south Mission, said she was working with several individuals in drafting a resolution to present to the Mission city council in hopes of getting its members to stand against the proposed border wall.

Welliver said the wall is already affecting tourism in the city as she’s received several phone calls and messages from regular Winter Texan customers saying they are not coming back to the city this year due to the border wall.

“If you look at the popular travel website, Trip Advisor, to explore the city, it shows that the top five things to visit in Mission are the La Lomita Chapel, Bentsen State Park, the Riverside Club, the National Butterfly Center and Anzalduas Park. All those places would be behind the wall once it is built,” she said. “I can’t imagine what that list would look like with the wall in place.”

According to Welliver, each Winter Texan makes a significant impact on the Valley each year.

Every two years the University of Texas Rio Grande Valley produces a report derived from data collected in surveys by area publications serving the tourist industry, among them the Winter Texan Times that, like the Progress Times, is published by Jim Brunson. WTT Director of Sales and Marketing, Norma Reyes, said there are 300 RV resorts from Mission to South Padre Island. Citing the university’s 2015-2016 Winter Texan Report, Reyes said Winter Texans generate about $14,900 per household per season bringing a total $760 million to the Valley annually.

Citing the most recent report Brunson said the Winter Texan population in the RGV declined about 4 percent for the 2015-2016 season compared to two years earlier.

“According to my conversations with many different RV park managers, concerns about the border violence and safety has definitely played a role in this decline,” Brunson said.

Oleander Acres’ Welliver said once completed, the border wall would make the city lose revenue they can’t afford if more Winter Texans stop showing up in the city because of the wall.

“The border wall won’t be something a tourist will come down and want to see,” she said. “Mission is a beautiful area with a lot to offer. To leave landmarks like the La Lomita chapel on the other side of the wall would be a grave mistake.”