Sharyland Pioneer High School hosted the All-Valley Wrestling Championships Friday and Saturday of last week. It featured 25 boys teams and 24 girls teams from all over the Rio Grande Valley and Corpus Christi including six of the seven Mission, Sharyland and La Joya ISD schools’ teams.

With 250 wrestlers competing in the 14 weight classes of the boys’ tournament, the competition was fierce. Yet when all was said and done, the Diamondbacks took their own tournament championship with three of their wrestlers winning their respective weight classes; Diego Serna (106 lbs.), Juvel Castillo (126 lbs.) and Dominique Rodriguez (182 lbs.). The only other Big 7 boys’ wrestlers that won their weight classes at this tournament were both from Mission High; Alberto Juarez (113 lbs.) and Aaron Cuevas (120 lbs.) 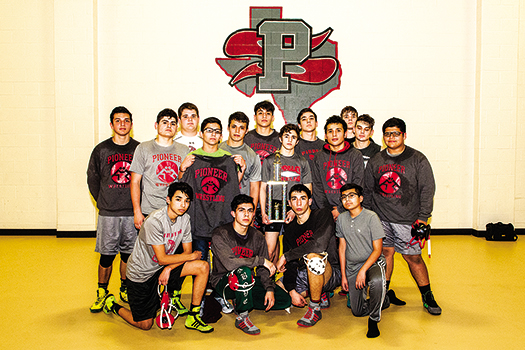 Pioneer’s Juvel Castillo may only be in his second year of wrestling but he was a regional qualifier last year and he has a 30-8 record so far this year. Castillo won all six of his All-Valley Championships matches by pins to win the 126 lb. weight class.

“The first day I won all three of my matches,” Castillo said. “The second day I won three matches again. The last match was the one that I was really shooting for.”

Castillo’s final match was against Sharyland’s Juan Colegio (30-4) who he defeated with a fall at the 5:42 mark to take the class.

One of the Diamondbacks’ state qualifiers last year, senior Brandon Pritchard, had to settle for a third place finish at the All-Valley Championships in his weight class of 145 lbs.

“I only had one tough match at the All-Valley Championships and that was the match that I couldn’t win,” Pritchard said. “That match went into overtime, I didn’t get the call, and he took me down in overtime and that was the only match I lost.”

Pritchard won his third place match over Mission’s Jose Resendez with a fall at the 1:48 mark. With that win, Pritchard improved his overall record this season to 34-7.

When asked how being on the Pioneer wrestling team has benefitted him, Pritchard said, “I have created a great work ethic for myself. I definitely think that my attitude has been better the past few years. My grades have come up and that has flummoxed a couple of my teachers because they used to think I was a really bad student. Now I’m that attentive kid that sits in front of the class. That has definitely confused a couple of my teachers.”

Pioneer senior Dominique Rodriguez won his 182 lb. weight class at the All-Valley Championships by defeating Esteban Gallardo of Corpus Christi Moody by a fall at the 5:01 mark. It was that first place match that made Rodriguez realize that while he has dominated most of his matches, there is still room for improvement.

“I had one really tough match against a wrestler from Moody,” Rodriguez said. “He gave me a really tough match and it’s been a while since anybody has given me such a tough match down here in the Valley. So it really woke me up on what I need to work on so that I can prepare for District and Regionals. Especially things like my conditioning and my techniques.”

With that first place victory, Rodriguez improved his overall record this season to 31-3.

In the girls’ tournament, the La Joya Lady Coyotes took the championship with a team score of 332. That was 19 points better than second place Edinburg North’s score of 313 points. Among the other Big 7 schools’ teams in the tournament, the Pioneer Lady Diamondbacks fared the best by placing ninth with a score of 201 points. As for the rest, the Mission Lady Eagles placed 17th (109 points), the Palmview Lady Lobos placed 20th (72.5 points), the Sharyland Lady Rattlers place 21st (67.5 points) and the Mission Veterans Lady Patriots placed 23rd (20 points). 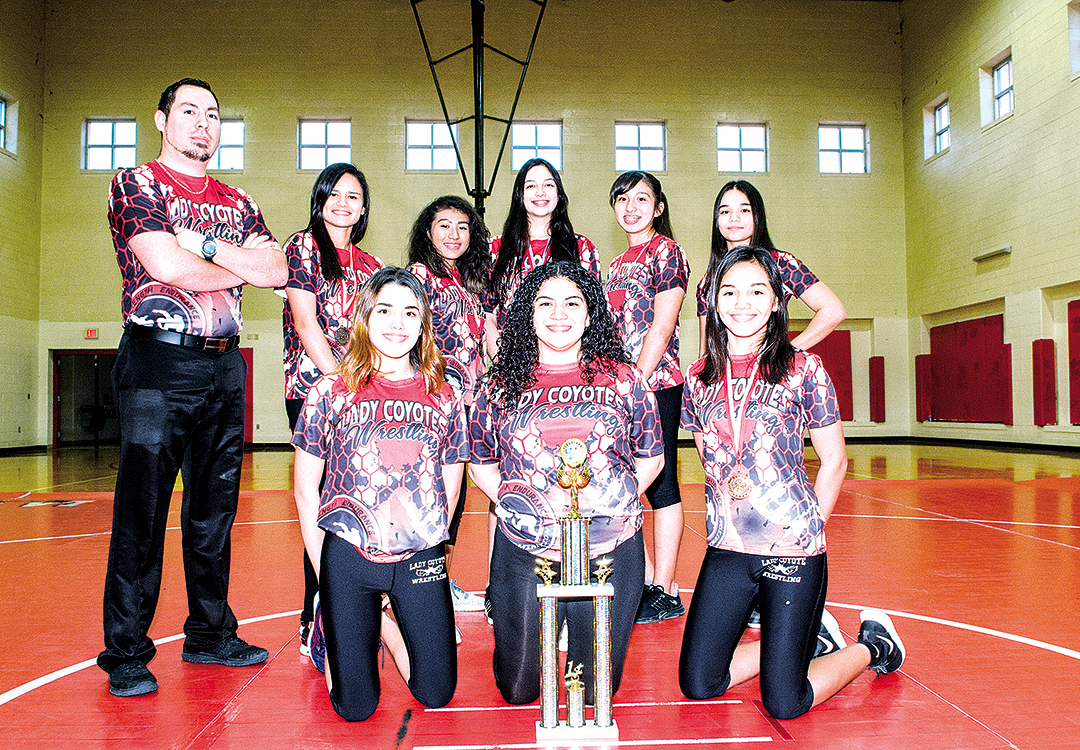 Individually, there were no Big 7 school girls wrestlers that won their respective weight classes. Even the Lady Coyotes, whose wrestlers accumulated enough points to take the team championship, failed to have an individual weight class winner.

When asked how this was possible, second year Lady Coyotes head wrestling coach Christopher Hernandez explained, “We have a strong team and while a couple of our girls came close to winning their weight classes, they made a few mistakes that ended up costing them. But we had a strong day one and the points we accumulated on that first day were enough to earn us the championship, even if we did struggle a bit on day two.”

In only his second year as the La Joya girls’ head wrestling coach, Hernandez will be looking to lead the Lady Coyotes to their second District 16-6A championships in as many years. However, the fact most of his wrestlers are new to the program, will make that a difficult goal to achieve.

“We actually only have three girls returning from last year’s district championship team,” Hernandez said. “However, all three of them were regional qualifiers. We have Veronica Montes moving up into the 165 lb. weight class from 148 last year, Estephany De La Rosa coming back in the 95 lb. weight class and Natalee Guzman returning in the 102 lb. weight class. The rest of our team is made up of a bunch of first-year wrestlers.”