Last month, movie-lovers in the Valley visited the sole remaining Blockbuster in Texas for the last time.

The Edinburg Blockbuster, located at 1510 S Sugar Road, closed its doors last month. Only eight locations around the country remain open, a far cry from the more than 9,000 stores the corporation had in the U.S. at its peak, before beginning to close them down after filing for bankruptcy in 2011. 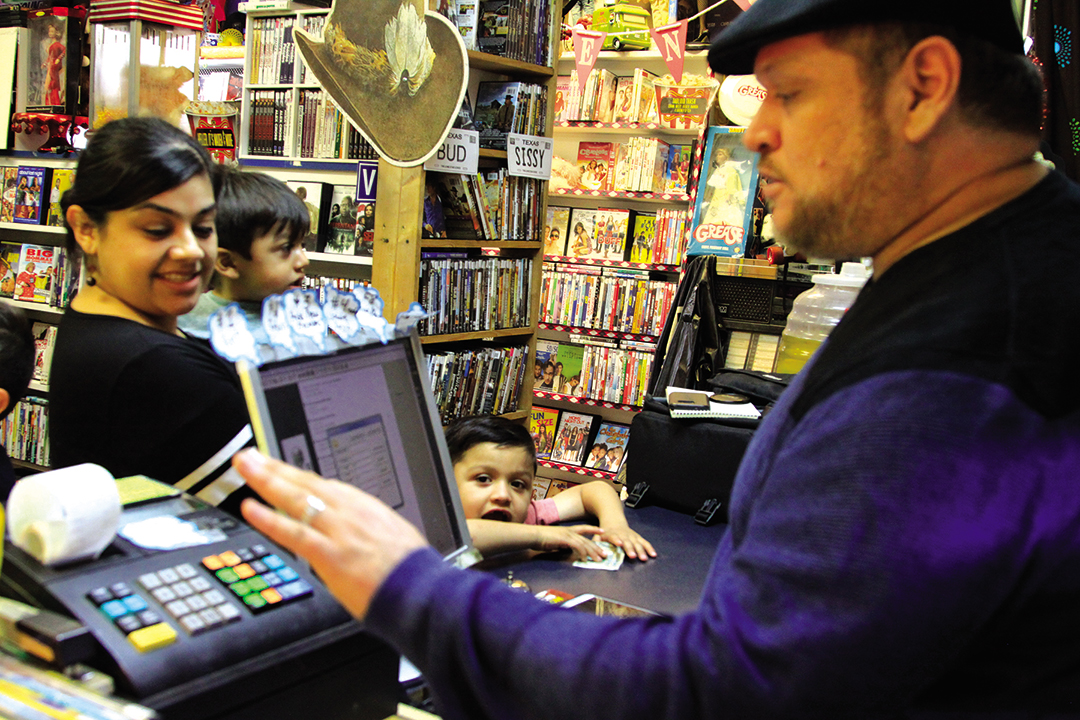 However, those same movie lovers can still experience the joy of visiting a video store right here in Mission thanks to Movie Night.

Located at 2718 N. Conway, Movie Night is an independent movie video store and, as far owner Homer Garza knows, the last of its kind in Texas.

“This store has been here eight years, it all started because of my passion for movies,” Garza said of Movie Night, which houses 20,000 movies, many of which are from his personal collection.

“We actually have an additional 20,000 movies in stock stored in three different storage units in the city,” Garza said. “My business partner and I are actually thinking of opening up a second location in McAllen or Edinburg filled with those additional titles.”

Movie Night is decorated with vintage toys, nostalgic décor and memorabilia to add some fun touches to the store, Garza said. Movie Night even has its own room devoted to horror movies decorated in Halloween props that Garza said is the store’s most popular attraction.

Besides movies, the store even features concessions for customers looking to make a fun movie night at home and a restaurant with to go plates selling items such as nachos, burgers and fried pickles.

To make browsing for movies fun, the categories the movies are stored in include “SNL Alums,” and the LGBT section titled “Bromance, ” among others.

“Bromance is right next to the musical section,” Garza said with a laugh.

THE OPENING
When Garza first got the idea to open Movie Night, he recalled a lot of people expressing a lack of faith in his idea, including his business partner George Lara.

“He actually told me, ‘Why would you want to open a video store when that business was dying?’” Garza recalled. “It was true, at the time several Blockbuster locations around the country were closing and all the Hollywood Video stores in the Valley closed. It seemed crazy.”

Despite the lack of support and the rise of popularity in services such as Netflix and Redbox closing down Blockbusters, Garza opened the store anyway.

Two weeks after the opening, the Mission Blockbuster location down the street from Movie Night closed its doors.

Because of that closure, Garza said, Movie Night became the sole rental store in the area which he credits to keeping his business afloat.

“It’s hard in the age of streaming and downloading and piracy to be in this business,” Garza said. “It’s not a very profitable business as whatever money we make we put back into the store to purchase more titles, but we do it because we like it. We’re avid movie fans.”

Among the many regular customers in the store is Jesse and Sylvia Cantu, a married couple who say they come to the store every Friday since it opened to rent at least three movies.

“It’s convenient coming here,” Jesse said. “We don’t have Netflix because we know we’d miss coming here and at Redbox, you can only rent movies for one night at $2.50. Here, you can rent a movie for two night with the same price.”

Sylvia, who was browsing the film’s New Release section, said she and her husband support the store because they are firm believers in “mom and pop shops.”

“There’s so many options here and it’s great seeing a local business prosper like this,” she said. “It’d be a real shame if this store disappeared like Blockbuster.”

‘FROZEN IN TIME’
For Garza, Movie Night is a chance for local residents to experience the same joy he felt when he went to his first video store.

“My first video store visit was Heaven on Earth,” he recalled. “I was always fascinated with going to the movies, so going to a video store and realizing I could finally take those movies I love home with me was pure happiness. The joy of seeing “Grease,” my favorite movie of all time, on my TV was unlike anything I’d ever experienced. For customers here hoping to recreate that feeling, this place is frozen in time.”

Even though the store isn’t very profitable, Garza said the joy Movie Night brings to customers makes it worth it.

“It’s rewarding when a family comes here and they’re so excited. Parents will come in with their kids and get nostalgic and say ‘When I was the same age as my kids, my mom and dad would take me to a store just like this,’” Garza said.

With Movie Night, Garza said he and Lara are trying to keep the 20th century alive for as long as they can.

“Home entertainment and home video was such a big thing, but we’ve evolved into a more modern tech-based world and this experience is being forgotten,” he said. “It’s a luxury people may not realize they’re losing. Without a place like this, people would lose access to over 20,000 film titles they won’t be able to find anywhere else. Everything is going digital now, but with a physical store, people can watch any movie they want when they want, not when Netflix makes it available.”