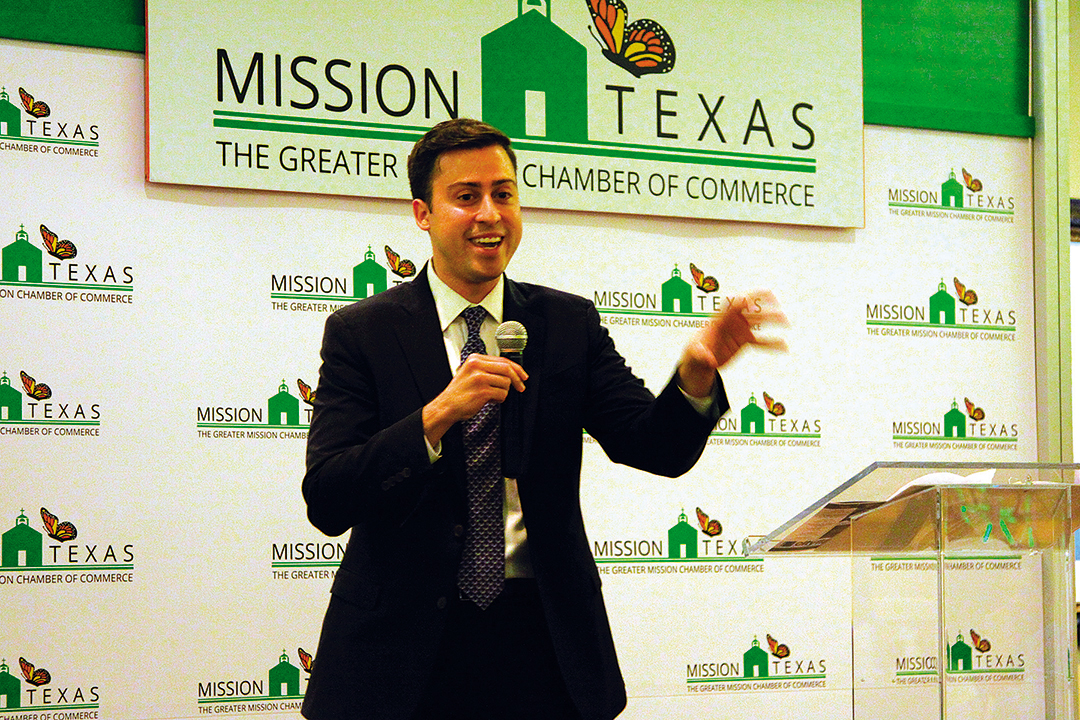 As previously reported, Cityflag developed an app that allows citizens to upload photos of municipal problems such as a pothole or graffiti as a 311 hotline to report the issues to the city. The app has been tested in Mexico City and San Antonio and will roll out in the city of Mission next month, Mission EDC CEO Alex Meade said.

“It won’t be your typical 311 app,” Meade said. “This is going to be an economically focused app with some features that will complement the work the city is doing.”

Altamirano, a graduate of Sharyland High School, co-founded the company after nursing an interest in smart cities, politics and civic engagement. Previously, he served as the MEDC’s “Expert-in-residence” as part of a local mentorship initiative that rotates in-house distinguished professionals and companies, and was named one of Forbes’ 30 under 30 in their list of social entrepreneurs last November.

In creating Cityflag, Altamirano said he wanted a way for the public to communicate directly with their local government besides social media.

“You can report anything with it and it also makes it a more efficient way to create a dialogue between the public and their government,” Altamirano said of the company. “The feedback we received was incredible. The feedback we received was positive, we started this company from an $8,000 grant from the MacArthur Foundation and it was unbelievable a kid from Mission was able to compete at the national level to receive that grant.”

As part of the Buenas Tardes Luncheon, Altamirano and Meade stressed the importance of nurturing local innovation to foster economic growth in the city.

According to Meade, the MEDC is doing just that with local programs such as the Ruby Red Ventures which funds local startup companies and training the workforce in computer science to prepare them with jobs in that field.

“Local communities don’t have to be big cities like Austin to be innovative,” Meade said. “The Valley has the potential to be great just like every other region; we have what every community wants: a young population and I think we need to nurture that. We’re limited in how we can invest with money, so we get creative with small businesses and workforce development. However, we still want to continue nurturing new ideas. We’re the entity to run those ideas by.”

During his nearly 20-minute long speech at the luncheon, Altamirano said Cityflag is a proof of how successful a local business can be if it is supported by the city as the city of San Antonio was their first customer.

“And after that, we got a contract with Mexico City and the company started growing,” Altamirano said. “One of my professors once told me you have to talk to cities about why it’s important to innovate. Cities must act like systems but they need to perform like entrepreneurs. That’s when you truly achieve that success as a community.”

Altamirano also praised the city of Mission for how it was currently cultivating innovation, such as hosting a Civic Innovation Summit last month at their CEED building and preparing to launch the Cityflag app.

“Is it audacious to do it? Of course, but this is a city ready for innovation, and we shouldn’t stop it by thinking too conservatively and not releasing technology that other big cities are doing,” he said. “We’re a city of success and we’re gonna do it.”

Ultimately, Altamirano said he hopes his hometown will be as successful.

“The Valley offers a unique experience,” he said. “It’s a bicultural setting…a beautiful experience. Growing up here, I enjoyed what the Valley represents, and I learned a lot about who I am. The Valley has a culture for nurturing economic development. Economic success is about community building. And that’s what I see today.”