*This article was originally published in our Friday, May 18, issue*

Honoring the service and sacrifice of officers and firefighters in the City of Mission, a memorial ceremony was held at the beginning of National Police Week.

Held at the Mission Police Department Monday morning, police officers, firefighters, constables, chiefs and local politicians and representatives gathered for the service. Members of the city council were also in attendance, and several people spoke in order to commemorate those who have lost their lives in the line of duty. 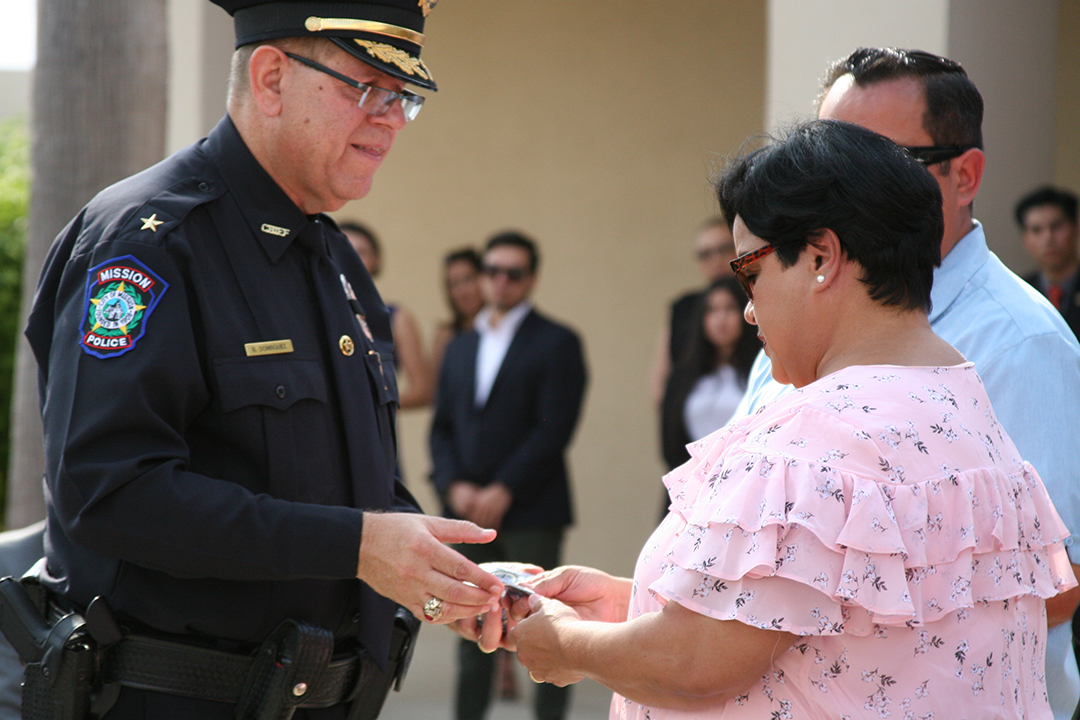 President John F. Kennedy named May 15 Peace Officers Memorial Day in 1962, and it has been celebrated annually ever since. Mission dedicated the ceremony to officers in the PD as well as the Fire Department, and aimed to respect their legacy.

Aida Lerma, Mission Deputy City Manager, was the master of ceremonies for the memorial service, and spoke about the impact of officers in the community and what they were hoping to do with the ceremony.

Lerma spoke about the job of a police officer, and the mission of law enforcement being to protect and serve.

“For anyone involved in that mission, there is always the potential that protecting and serving can lead to sacrifice,” Lerma said. “The potential is part of the code honored not only by every law enforcement officer, but also by every spouse, child and family member. It is a special burden they bear to give the rest of us the safety and peace we sometimes take for granted.”

Mayor Norberto Salinas was unable to attend the ceremony, so Mayor Pro-Tem Norie Gonzalez Garza spoke on behalf of the city. She read a poem written by Robert Longley titled “A Hero’s Welcome,” and thanked the families present for the sacrifice of their loved ones.

Present at the memorial ceremony were Texas Senator Juan “Chuy” Hinojosa and District Attorney Ricardo Rodriguez, along with representatives from the Mission Housing Authority, the Drug Enforcement Administration, the Federal Bureau of Investigation, the U.S. Marshals, Immigration and Customs Enforcement, Texas Department of Public Safety, the Texas Rangers, Border Patrol, the office of Congressman Henry Cuellar, the office of State Representative Sergio Munoz, Jr., the Hidalgo County Sheriff and police chiefs from the City of Alton, Edinburg ISD, the City of La Joya, La Joya ISD, the City of Palmhurst and the City of Pharr.

“I want to take the opportunity to first of all thank all the families for being here with us today, for making sure that we don’t forget the sacrifices our police officers and our firefighters do on a daily basis,” Garza said. “It’s a great importance for us as public servants to be able to have the support not only of our counterparts, but also the community itself.”

Robert Dominguez, the Chief of Police for the City of Mission, spoke at the ceremony, and honored the families of the two officers and deputy constable who were given special honors.

“Throughout this week, we join countless colleagues in paying tribute to our fallen police officers throughout our nation,” Dominguez said. “Today, the City of Mission and its great citizens honor our fallen heroes.”

He presented the Avila family and Velasco family with coins specially made in their memory. The coins have photographs of the officers on one side, and the Mission Police Department pads they wore on their uniform, along with their end of watch date.

“The coins are provided to those left behind as a constant and enduring reminder of their sacrifice,” Dominguez said. “I hope that the Avila and Velasco families know that our community and our police department have not forgotten these brave officers and their sacrifice.”

After the placing of the wreaths by Dominguez and Sanchez, the Mission Police Honor Guard gave the Twenty-One Gun Salute, followed by a performance of “Taps” by VMHS Mariachi Director Francisco Vela, Jr.

Pastors Eliud and Cathy Garcia from Freedom Life Church gave the invocation and benediction for the memorial ceremony, and prayed for blessings over all the officers who have fallen and all those present.

“Father, I thank you for the promise of the Holy Spirit,” Cathy Garcia said. “You said that he would be our comforter and our guide. And I thank you that that is exactly who he is to the families today. Bring them sweet comfort.”