Gathering at the Shary Memorial Chapel, police officers from across the Rio Grande Valley gathered for a memorial service for those who have fallen in the line of duty.

Last Friday, May 18, the Palmhurst Police Department and the city drew officers and service members, as well as local families and officials, in order to pay respects to those who have given their lives as officers of the law. The service, which took place outside the newly renovated Shary Memorial Chapel and municipal park, was followed by a lunch for those in attendance. 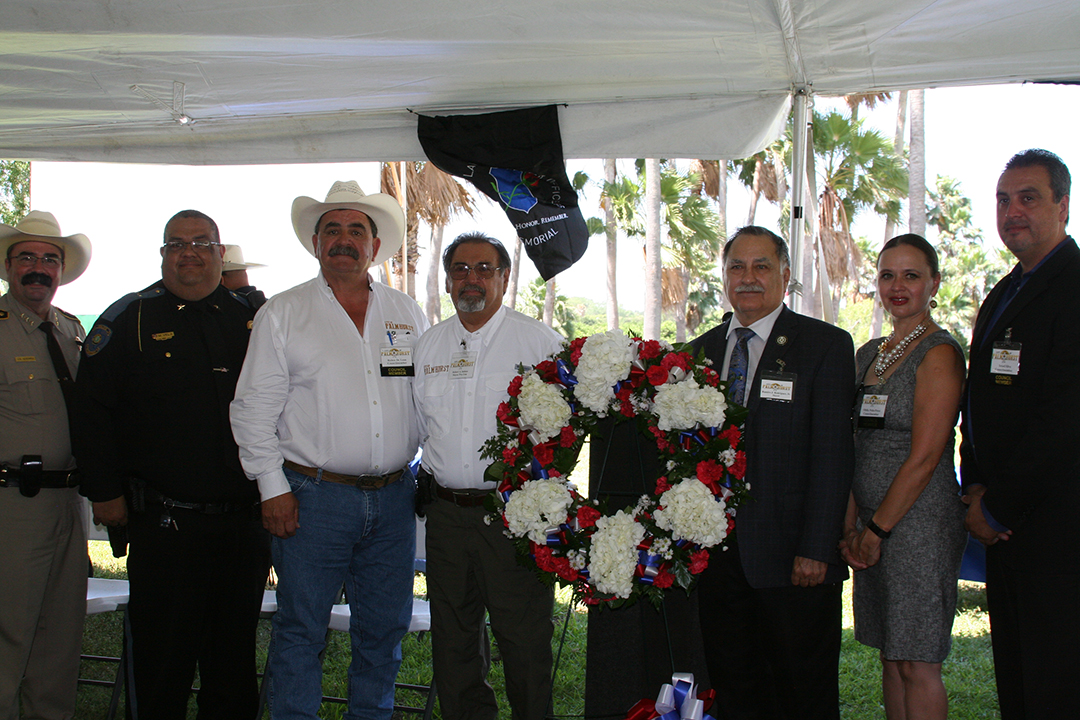 Ruby Martinez, from the Texas Department of Transportation, was the master of ceremonies for the event. She spoke about the sacrifices police officers make in order to serve and protect the community.

“When duty calls, they drop everything and they respond,” Martinez said. “They give up on so much of their family lives to serve and to protect. Thank you to their families as well, for allowing them to do their jobs.
Most importantly, thank you for doing a job most of us couldn’t do.”

The Mission PD Color Guard did the presentation of colors, and the Mission High School Choir sang the National Anthem for those in attendance. Ramiro J. Rodriguez, Jr., the Mayor of Palmhurst, read a proclamation about National Police Week, and how they plan on upholding it in the city.

“The members of the law enforcement agency of the Palmhurst Police Department play an essential role in safeguarding the rights and freedoms of the citizens of Palmhurst,” Ramiro Rodriguez said. “It is important that all citizens understand the problems, duties and responsibilities of their police department, and the members of the police department recognize the duty to serve the people by safeguarding the lives and property by protecting them against violence or disorder, and by protecting the innocent against deception and the weak against oppression or intimidation.”

Ramiro Rodriguez was proud of how the ceremony came together, and hoped its message would reach the entire Valley. Michael Vela, the Palmhurst Chief of Police, spoke about the importance of the ceremony and why it is honored every year.

“This year we pay tribute to extraordinary individuals whose stories are a testament to the bravery, patriotism and valor of America’s law enforcement officers at every level,” Vela said. “Their names are now permanently carved into a memorial, and into our hearts, as a reminder of their supreme sacrifice.”

Vela said that police officers all come from diverse backgrounds and upbringings, but were joined in life through their service and call to duty.

“Today we celebrate and remember all that they were, all that they did and all that they stood for during the precious years we were privileged to have their service, protection, friendship and their love,” Vela said. “May God bless the memories of those we lost, and those who continue to serve.”

The special guest speaker for the service was McAllen Chief of Police Victor Rodriguez, who started his speech with an impassioned thanks to all veterans who have served in the United States Military in some way.

“We’re able to gather this way, we call this the right to assemble,” Victor Rodriguez said. “We enjoy this because many, many, many moons ago, this was the vision of our founders. So they came here to create this opportunity. And since that time, there have been many men and women who have given their lives fighting here and abroad to preserve this ability.”

Victor Rodriguez spoke about the significant impact police officers have, and their role in the community they take an oath to serve. He told a story about how, at a coffee shop he frequents, he recently met two women from Mexico who were surprised to see a police officer out and about without any protection or security, and could be approached freely by civilians.

“It takes a strong and brave person to deal with the things they do on a daily basis,” Martinez said. “They have to make quick decisions in life or death situations, and there is never a guarantee that their decision is the right one. A police officer is able to handle the pressure to make the best decision in that moment. Not many people can knowingly put their lives in danger like these men and women do.”