This article originally appeared in the Friday, June 22, 2018 issue of the Progress Times

The official canvassing of the votes and ceremony took place at the Mission Event Center, and both officials were sworn into office by Patty O’Caña-Olivarez. 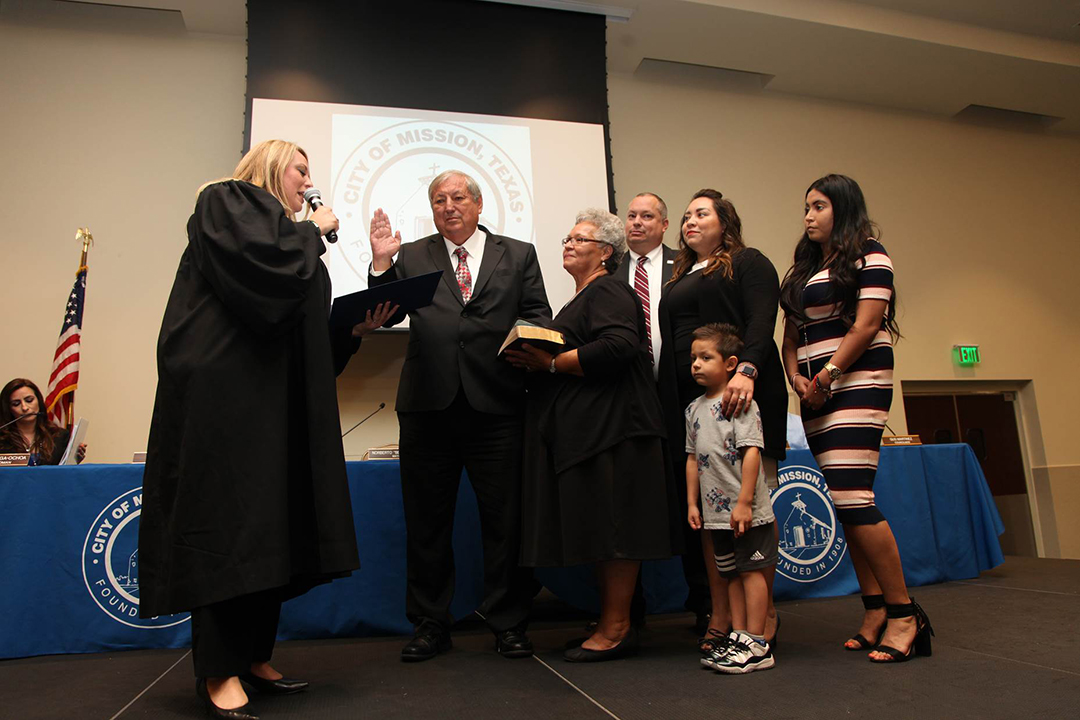 Anna Carrillo, the city secretary, read the results of the June 9 runoff election, in which Martinez ran against Julian Gonzalez, and Armando O’caña ran against incumbent mayoral candidate Norberto Salinas, who had previously served the City of Mission as mayor for twenty years.

In the race for City Council Place 4, Martinez received 3,448 votes in the runoff, and Gonzalez received 3,131. In the mayoral race, O’caña received 3,475 votes and Salinas received 3,318 votes.

Martinez said he was ready to get to work and serve the city.

“It’s time to start giving back to the city,” Martinez said. “It’s given so much to me, so I hope I can do as good of a job. I’m always available, give me a call, come on by, and let’s do this.”

This marks a historic day for the city, as O’caña plans on making several changes as mayor, a dream he said he has had since he was a child.

“There are some who have been here since I was a little baby from south Mission all the way to the mayorship, and I want to personally thank you and your blessings,” O’caña said. “Those who have come on board lately, and have not been on board with me, welcome. We have a new voice, a new Mission, but it’s your choice.”

O’Caña-Olivarez spoke before her uncle, Armando, was sworn into the mayoral seat. She said this was a huge accomplishment for their family, and they hope to continue their work for the city.

“If you think it’s an emotional moment for you today in the city, you can just imagine what our family has been through and what an accomplishment this has been for our entire family,” O’Caña-Olivarez said. “Our family is very united and today, as we have in the past, shared with you a man who has been an epitome of public service with a servant’s heart.”

She continued to say that Dr. O’caña has been the family’s role model throughout their lives, and is the reason why his nieces, nephews and children also chose to serve the public.

“It is truly a blessed day for the City of Mission,” O’Caña-Olivarez said. “And this is a new chapter.”