Following the flooding that happened across the Rio Grande Valley in June, the Food Bank of the RGV and the City of Mission teamed up to offer more help to those still in need.

Volunteers and city officials held a makeshift drive-thru at the Catholic War Veterans Park, located at 115 S. Mayberry Rd. in Mission, last Thursday at 4 p.m, and handed out water, food and cleaning supplies. 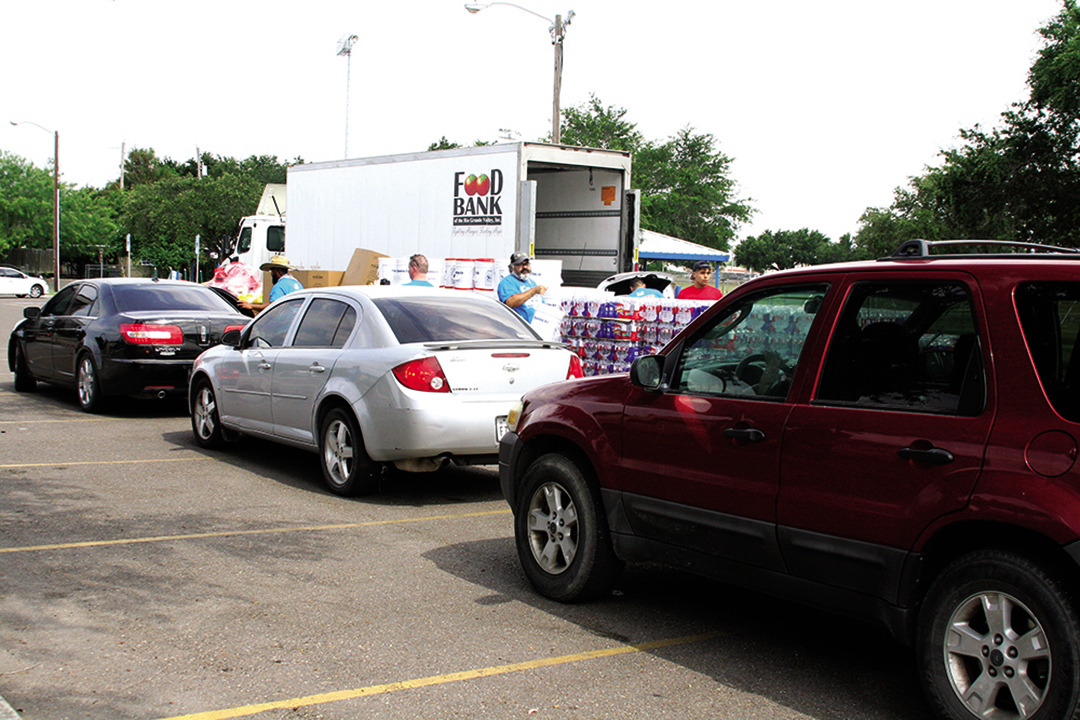 The distribution line was next to the Disaster Recovery Center set up by the Federal Emergency Management Agency (FEMA).

As 4 p.m. approached, cars lined up and curled down Mayberry all the way to Frontage Rd. As the people waited, members of FEMA approached them and gave them further information about the recovery center and how it can be of further assistance.

According to Emergency Management Coordinator James Cardoza, the turnout at the FEMA Disaster Recovery Center has been low, which concerns the city staff.

Cardoza said this weekend&rsquo;s turnout has shown improvement, but they are still trying to get residents who need help to the center.

“They&rsquo;ve been seeing a lot more people, but it was horrible last weekend,&rdquo; Cardoza said. “10-12 last Saturday, two on Sunday. So I said, I&rsquo;ve got to do something about that.&rdquo;

The city chose the CWV Park because of the close proximity to the recovery center, so if people had more questions they could just drive next door.

“I said look, let&rsquo;s try to kill two birds with one stone,&rdquo; Cardoza said. “Let&rsquo;s put it next to the site [of the Disaster Recovery Center], so that people can go there too.&rdquo;

Mayor Pro-Tem Norie Gonzalez Garza mentioned the number of people who were going to the FEMA facilities at a recent city council meeting.

“I want to encourage anyone that was affected by the floods in June to go by the FEMA office, which is at our social center by the food pantry,&rdquo; Gonzalez Garza said. “I did talk to someone who had been to the location today, and they said that the people were kind of not turning out.&rdquo;

Gonzalez Garza said it concerned her because she said 175 homes had not even been assessed yet.

“There&rsquo;s got to be people out there who have been affected,&rdquo; Gonzalez Garza said. “Maybe they don&rsquo;t know about it, so if you guys could help in disseminating the information, that would be great, because we need to get people out there that need help.&rdquo;

When initially reporting damages so the area could meet the FEMA threshold of $38 million, people filled out a form and submitted it to the City of Mission. That form was not for FEMA specifically, and residents who need financial assistance will need to go to the recovery center to get their questions answered.

“They said, ‘I already applied,&rsquo; and I had to tell them no, that was a city form,&rdquo; Cardoza said. “They thought it was that simple.&rdquo;

The Food Bank of the RGV and the City of Mission distributed all 500 cases (food, cleaning supplies and water), enough to aid 500 families in Mission.

“I think that&rsquo;s a good thing, you know,&rdquo; Cardoza said.