The Mission Veterans Patriots football team has experienced more than its share of success over the years. Case in point, under the leadership of head coach David Gilpin, the Patriots have qualified for the UIL state playoffs eight of the past nine years. That includes playoff appearances the past six years in a row and advancing into at least the second round of postseason play the past four years. That is the kind of success few high school football programs ever achieve and most head football coaches can only dream of.

While most coaches would be satisfied with that kind of success, Gilpin is not most coaches. That’s because he enters each season looking to raise the bar his past teams have already set high, even higher. 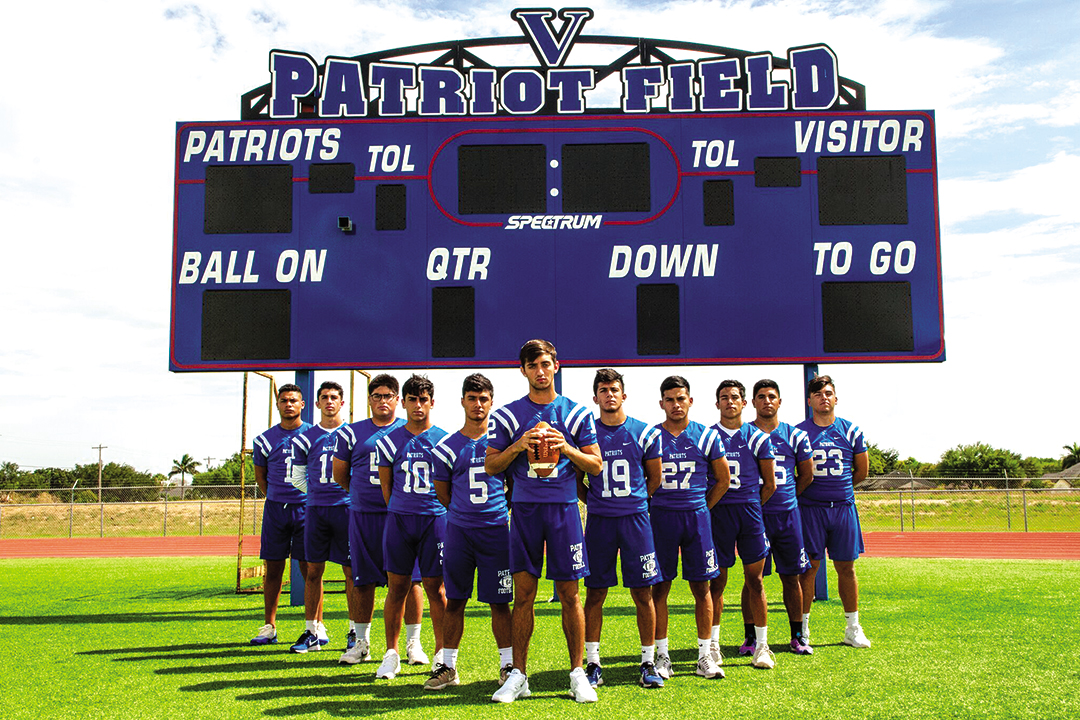 If Gilpin and his Patriots are going to raise their playoffs bar this season, they will first have to take care of business in the newly formed District 16-5A-1. That is the district the Patriots will be members of the next two seasons as a result of the UIL’s most recent realignment.

This ten team district, which includes all the Valley’s 5A big schools, is made up of Brownsville’s Lopez, Veterans Memorial, Pace and Porter, PSJA’s Memorial and Southwest, Donna High, Rio Grande City, La Joya Palmview and of course the Patriots. As part of a ten team district, the Patriots, along with the other16-5A-1 teams, will all be limited to one non-district game. That is just one of the changes that Gilpin and his Patriots will have to deal with this season.

“We’re pretty much in a brand new district,” Gilpin said. “The only familiar foe we have is Rio Grande City. The other big thing with realignment is that we now have 10 teams in our district. That’s a huge district, and as a result, you play only one non-district game and you’re into the fire. So you’ve got to be game ready really fast in this district and we feel confident that we will be.”

Something else Gilpin is confident about is his Patriots’ chances of doing what only a handful of Valley football teams have ever done, advancing into at least the fourth round of the state playoffs.

“We’ve advanced into the second round of the playoffs four years in a row.” Gilpin said. “That includes a third round appearance two years ago. And our goal is to shatter that this year. People in the Rio Grande Valley don’t talk about what we’re talking about doing. I don’t care what anybody thinks about what I believe we can do this year. I’m talking fifth round this year. I’m talking final four and regional champions.”

“I believe that we have the kind of team that can accomplish this and I’m not scared of being laughed at for saying that,” added Gilpin. “I believe that we’ll be 14-0 and playing for a regional championship this year. So get on the bandwagon now and if things go right, and we’re able to keep our key pieces on the field, I can see us being 10-0 as we go into the playoffs and being 14-0 playing the Region III champions.”

A big reason for Gilpin’s confidence is the fact that he has the Valley’s top player leading his offense.

Named the Valley’s football player of the year at the 2018 All Valley Sports Awards Banquet, Landry Gilpin is entering his second season as the Patriots’ quarterback.

Just how good is the younger Gilpin? Good enough to put up 3,172 yards through the air, 1,718 on the ground, and good enough to account for 48 combined touchdowns last season. He completed 56 percent of his passes and threw just five interceptions on 375 attempts. In addition, Gilpin received two All-State selections (TSWA and AP), was named Player of the Year by both The Monitor (All-Area) and High School Sports Magazine (All-South Texas) and he was named District 31-5A’s Most Valuable Player.

As impressive as those stats and all those well-deserved post season honors are, Gilpin could not have done it without a great supporting cast. And that is something he is well aware of.

“I think that our success as an offense is due to the talent of the receivers that I’ve grown up with in my class and the class below us,” Gilpin said. “The people that have been put in position to be with us on the offense have been a blessing. Our receivers don’t drop a lot of balls. They are very athletic, very capable of playing in big games and they don’t shy away from big moments. Putting all of that together, we’re capable of doing a lot as a team.”

The fact that Gilpin is a dual-threat quarterback, makes him perfect for running what many are now calling RPOs (run/pass option plays). When asked if he prefers running RPO type plays over the more traditional run or pass plays, the 5-foot-11-inch, 160-pound, senior quarterback said, “I like the fact that a lot of defenses see me as a running quarterback. That’s because whenever I get downhill and I get them to bite down on me, that opens up the receivers a lot more. And as they have proven over and over again, you give my receivers space and they’re going to make something happen.”

One of the receivers that Gilpin has will be targeting the most this season is fellow senior John Aguilar. Last year, Gilpin and Aguilar connected on 38 receptions for 659 yards and four touchdowns.

The fact that of the Patriots nine district games only three will be at home does not concern Aguilar too much. That’s because he knows that no matter where they play, Patriots fans will be there.

“Of course everybody thinks that at home you have all your fans with you but we look at road games as business trips and we have work to do,” Aguilar said. “Besides, our fans follow us on the road very well.”

When asked what goals he has set for himself in this his final season as a Patriot, the 5-foot-7-inch, 155-pound wide receiver said, “To go out and have the best season I’ve ever had.”

With Gilpin, Aguilar and several of the Mission Veterans’ skill players being seniors this season, this could be the year that Coach Gilpin leads his Patriots to the place no Patriots team has gone before; the fourth round of the state playoffs. However, first up for Mission Veterans will be the Mission Eagles who they play in their only non-district game of the season, Friday, August 31 at Tom Landry Stadium. Then they’ll kick off District 16-5A-1 play at PSJA Memorial, Thursday, September 6. Will that be the start of something big for the Patriots? Only time will tell for sure, but Coach Gilpin for one, certainly thinks it will.