Adding five people to the Wall of Fame, the Mission Historical Museum continues to honor those who have lived in service to the community.

The 12th annual MHM banquet was held last Thursday at the Mission Event Center. The fundraising event included performances from the Mission Parks and Recreation folklorico and a silent auction. 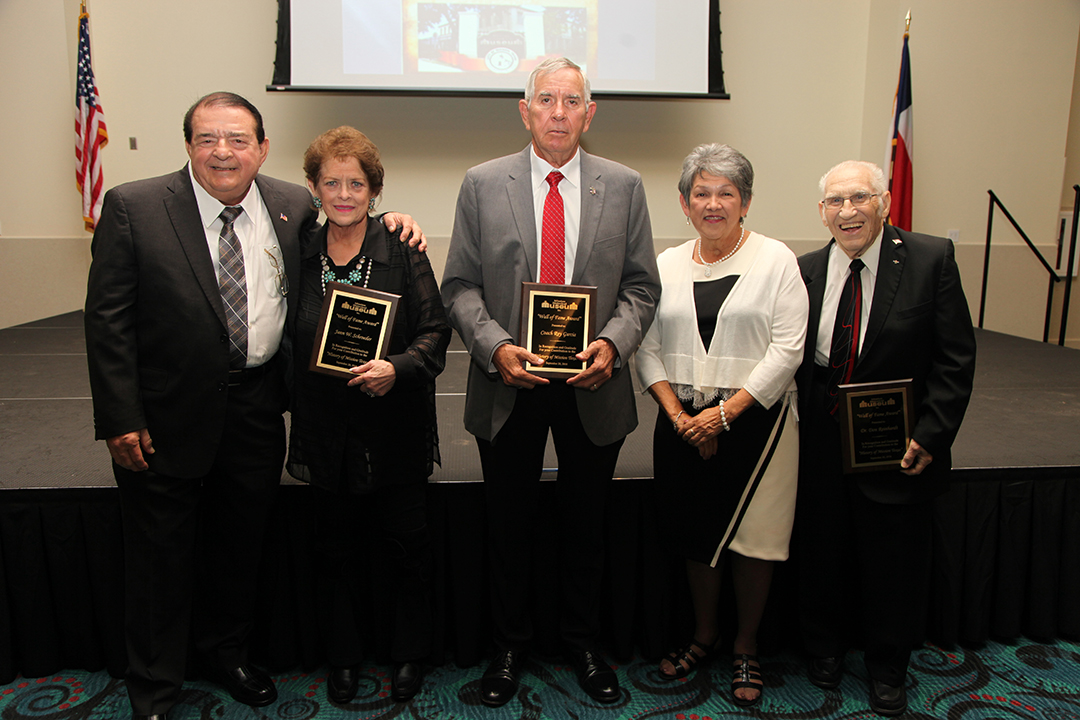 Cynthia Stojanović, the director of the Mission Historical Museum, pointed out that 2018 marks 110 years since the founding of the city, and said Mission has undergone a transformation “unlike any other in the Rio Grande Valley.&rdquo;

“Tonight we honor many more extraordinary individuals,&rdquo; Stojanović said. “And if history tends to repeat itself, the next 110 years are going to bring nothing but prosperity to our wonderful city.&rdquo;

The five honorees served in different positions throughout Mission and the RGV, and contributed in varying capacities.

After being honored and chosen to be put on the Wall of Fame at the Mission Historical Museum, Garcia thanked those in attendance.

“This means a lot to me,&rdquo; Garcia said. “Because really my goal was, when I was a sixth grader, to be a coach.&rdquo;
“It was my pride and joy, working for Mission High School,&rdquo; Garcia added. “So, for the rest of my life, Mission will be in my heart.&rdquo;

Leo thanked the Mission Historical Museum for honoring their “neighbors to the west,&rdquo; particularly the Leo family, who welcomed her when she married William “Billy&rdquo; Leo.

“This is such a humbling experience, because you also recognize the Leo family,&rdquo; Leo said. “A family that all of their lives saw fit to make any contribution possible to improving the quality of life in our county.&rdquo;

“I&rsquo;m honored and humbled to stand before you as a Leo,&rdquo; she continued. “I am a member of the museum, and I will be working even harder from this day forward.&rdquo;

Dr. Don Reinhardt
Reinhardt moved to Mission in 1995 from Kansas after retiring from his dental practice. He transferred his Lions Club membership to the Mission Lions Club in 1996, and has served as an active member for 64 years.

Reinhardt is a charter member of the Mission Historical Museum. He remains active in the Mission First United Methodist Church, and is the chairman of the church council.

He has been an active member and leader with the Boy Scouts of America for almost 80 years now, and it has taught him valuable lessons over the years.

“Part of the scout oath says that we should help other people at all times,&rdquo; Reinhardt said. “I tried to do this. I&rsquo;m sure that all the other honorees have given much of their time to help a lot of people.&rdquo;

Jann Schroeder
Schroeder worked with her husband Jim at their family business, the Mission Paving Company.

The Schroeders collaborated with the Mission Downtown Merchants to organize the Mission Classic Car show in 2003, bringing 350 vehicles from all over the United States and Mexico to participate. Each year proceeds from the show were donated to the Cystic Fibrosis Foundation, Teach the Children Organization and the Food Bank of the RGV.

Schroeder recalled when she got the word that she was going to be put on the Wall of Fame.

“They called and said ‘You have been chosen to be on the Wall of Fame,&rsquo;&rdquo; Schroeder said. “I was so taken aback, because I said ‘Thank God I&rsquo;m going to be up there with my husband.&rsquo;&rdquo;

Norberto “Beto&rdquo; Salinas
Serving in several elected positions all over the Rio Grande Valley, Salinas was the Mayor of Mission for 20 years. A businessman, he was able to split his time between work, public service and family.

Salinas also served Hidalgo County Precinct 3 for 12 years, and became a charter and lifetime member of the Mission Historical Museum in 2002.

He thanked everyone for the award, but said he was never in it for the recognition.

“I didn&rsquo;t want to be honored when I was in office,&rdquo; Salinas said. “I want to tell you that serving the City of Mission has been the best thing that&rsquo;s ever happened in my life.&rdquo;

Salinas said that together with the city staff, “they made it happen and they made it work.&rdquo; He also mentioned that it&rsquo;s a beautiful city to live in.

“I just pray to God that they [the new administration] take care of it and don&rsquo;t mess it up and tear it apart,&rdquo; Salinas said. “Because it can happen. It&rsquo;s so delicate, so easy to be torn apart and have no money and raise taxes.&rdquo;

Craig Verley, the Mission Consolidated Independent School District&rsquo;s director of Public Relations and Marketing, served at master of ceremonies for the evening. As the dinner came to a close, Verley said that the accomplishments of the honorees are to be admired.

“Reading through all the honorees biographies and backgrounds, really kind of makes me feel like a bit of a slacker,&rdquo; Verley said. “I think each of us can learn a lesson from all the individuals that are honored here this evening.&rdquo;