When the woman knocked on her door, 93-year-old Maria Canales thought she seemed suspicious. 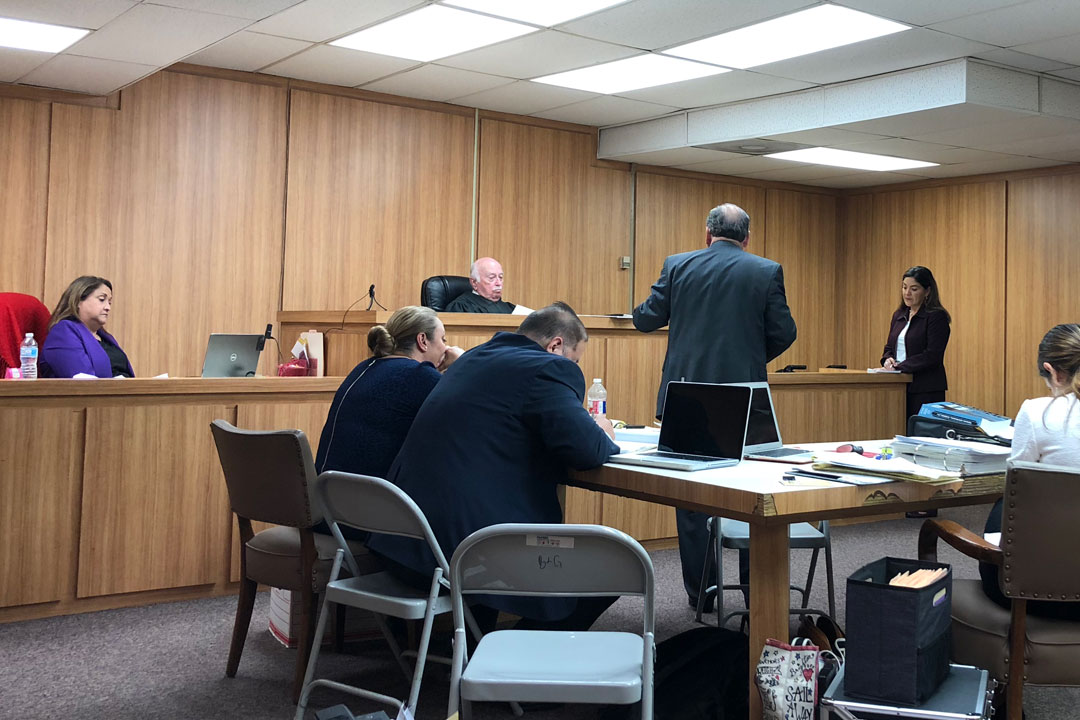 “I did not like the way she talked to me,” Canales said Monday, when she testified in state district court.

Lara arrived with another woman. They brought a bunch of paperwork, including a list of names. And they asked her to sign something.

Canales recounted the story Monday, when she testified during the Mission election trial.

O’caña received about 51 percent of nearly 6,800 ballots cast, according to results published by the Hidalgo County Elections Department.

The lawsuit describes a massive conspiracy by the O’caña campaign to bribe voters and manipulate mail-in ballots. O’caña strenuously denies the allegations.

The trial started on Sept. 24. Monday marked the fifth day of testimony, which focused on witnesses who received mail-in ballots — but said they never actually submitted an application to vote by mail.

“There were questions about how their signatures ended up on the applications,” said attorney Rick Salinas, who represents his father, adding that he believed politiqueras hired by the O’caña campaign submitted fraudulent applications for mail-in ballots.

When the mail-in ballots arrived, the politiqueras returned to “harvest” them, Rick Salinas said. They targeted elderly voters, including Canales, and people with disabilities.

Canales said she normally casts her ballot at the polls. While she recognized her signature on the mail-in ballot application, Canales said she hadn’t seen the document before.

Asked about that, Canales suggested someone copied her signature. The Elections Department received her ballot in June.

Lara, the woman who visited Canales, is a well-known politiquera with a checkered past.

The Texas Rangers investigated Lara in 2005, when she worked the McAllen mayoral election, according to records released by the Department of Public Safety. Voters said Lara handled their mail-in ballots.

A grand jury indicted Lara on 20 charges, including 13 counts of possession of another voter’s ballot or carrier envelope.

At the request of the District Attorney’s Office, however, Hidalgo County Court-at-Law Judge Arnoldo Cantu Jr. dismissed the charges.

Who hired Lara during the 2018 Mission mayoral campaign remains in dispute. Campaign finance reports filed by the candidates don’t show any payments to Lara during the runoff.

State District Judge J. Bonner Dorsey signed a warrant for her arrest Thursday. He withdrew the warrant Monday, when Lara arrived at the Hidalgo County Courthouse.

“I think it’s what they call a red herring,” Hinojosa said.

The witnesses, who offered conflicting and sometimes confusing testimony, said they recognized their signatures on the ballot applications, Hinojosa said. They also admitted voting for Beto Salinas.

“In my opinion, they brought up some people here today — and this is the big problem with this lawsuit — who were solicited mail-in ballots by Salinas politiqueras,” Hinojosa said. “That’s the only conclusion I can draw from it.”

“If what they say is true, you think that somebody that’s going to be harvesting votes for O’caña is going to go to a person who is going to fill out a ballot application for the opponent?” Hinojosa said. “And then drop it off at the post office for them?”