Week Eight of Valley high school football is now in the books and for four of the seven teams from the Mission, La Joya and Sharyland school districts, the Big 7, it was a week to remember. For the other three however, it was a week they’d like to forget.

From a last second field goal that enabled one Big 7 team to snatch victory from the jaws of defeat to a shutout win that kept another Big 7 team in the thick of the playoff race, Week Eight had something for everyone. 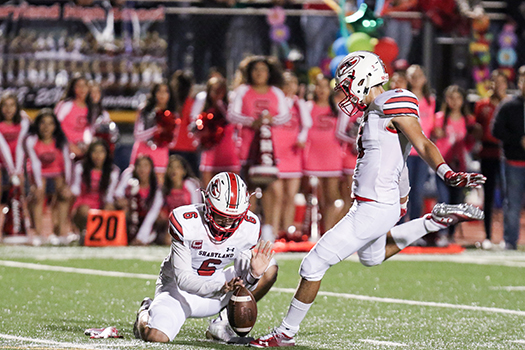 With their victories, the Mission Veterans Patriots and the Sharyland Rattlers remained undefeated in district play. As for the La Joya Coyotes and the Palmview Lobos, their victories kept them in control of their own playoff destinies.

Of the three Big 7 teams that found themselves on the losing side of their Week Eight games, the Juarez-Lincoln Huskies are the only one that is out of the playoff race altogether. That’s because despite having faltered in Week Eight, the 2-1 Pioneer Diamondbacks and the 2-2 Mission Eagles remain in the thick of the 16-5A-2 and 30-6A playoff races respectively.

With the 0-4 Huskies having played 2-2 McAllen Memorial at La Joya ISD Pack Stadium and the 2-1 Pioneer Diamondbacks having traveled to Laredo to play 0-3 Cigarroa last night, and with the 6-0 Patriots at 6-0 Brownsville Pace game tomorrow night being previewed separately as our Game of the Week, we will take a look at the remaining four games involving Big 7 teams here.

La Joya Coyotes at PSJA North Raiders
In what has become a battle for sole possession of second place, the 3-1 (6-1 overall) La Joya Coyotes will be taking on the 3-1 (4-3 overall) PSJA North Raiders at PSJA Stadium tonight. Coming off last week’s 41-31 win over the Mission Eagles, the Raiders will be looking to make it two wins in a row against a Big 7 team. With their only District 30-6A loss being by a score of 10-7 to the 4-0 PSJA Bears, the 2018 Raiders seem to be a much improved team over the 2017 Raiders that went 2-5 (2-8 overall).

As for the Coyotes, they’re coming off back-to-back shutout victories, 28-0 over McAllen High and 20-0 over Juarez-Lincoln. They also shutout the Roma Gladiators by a score of 49-0 and held the Sharyland Rattlers to only seven points, both in non-district play, so their defense should keep them in any game as they look to go into the playoffs as no worse than the second seed.

Likewise, the Warriors will be looking to bounce back after their back-to-back losses to PSJA North (38-22) and the PSJA Bears (48-21). With the Eagles, the Warriors and the McAllen Memorial Mustangs deadlocked in a three-way tie for fourth place in District 30-6A, the winner of tonight’s game will take a big step towards clinching one of the district’s four highly coveted playoff spots. Seeing as how the Eagles have already lost to the Mustangs this year, a loss to the Warriors as well could leave them on the outside looking in when it comes to the UIL state playoffs.

Mercedes Tigers at Sharyland Rattlers
Coming off their dramatic, last second 38-37 win over the Pioneer Diamondbacks, the 4-0 (5-3 overall) Sharyland Rattlers will be looking to avoid a let-down tonight as they host the 2-1 (3-4 overall) Mercedes Tigers. Last week the Tigers had to hold off Valley View after they scored 15 points in the first quarter and were shut out the rest of the way. Valley View scored nine in the third quarter and two in the fourth to give Mercedes a scare, but the Tigers pulled out the victory by a score of 15-11.

Against the Diamondbacks, Sharyland senior quarterback Edgar Longoria completed 13 of 20 passes for 152 yards, one touchdown and two interceptions. He also carried the ball 26 times for 155 yards and four touchdowns. That was only the second 100+ yards rushing performance and the first four touchdown scoring performance by any Rattler player this year.

With the 6-0 Mission Veterans Patriots and the 5-1 Brownsville Veterans Chargers still remaining on their schedule, this is a must win game for Palmview if they hope to hang on to one of the four top spots in District 30-6A and qualify for the playoffs.