The Mission Veterans Memorial Patriots picked up their second gold ball of the year after a 69-21 beat down of the Victoria East Titans in the bi-district round of the 5A-DI State Playoffs Friday night at Tom Landry Stadium.

The District 16-5A DI champions came out of the gate looking to make a statement and their defense did just that. After the Patriots muffed the opening kickoff and gave the ball right back to Victoria East at midfield, their defense responded by forcing a turnover on downs with middle linebacker Joey Garcia blowing up multiple plays in the Titan backfield. 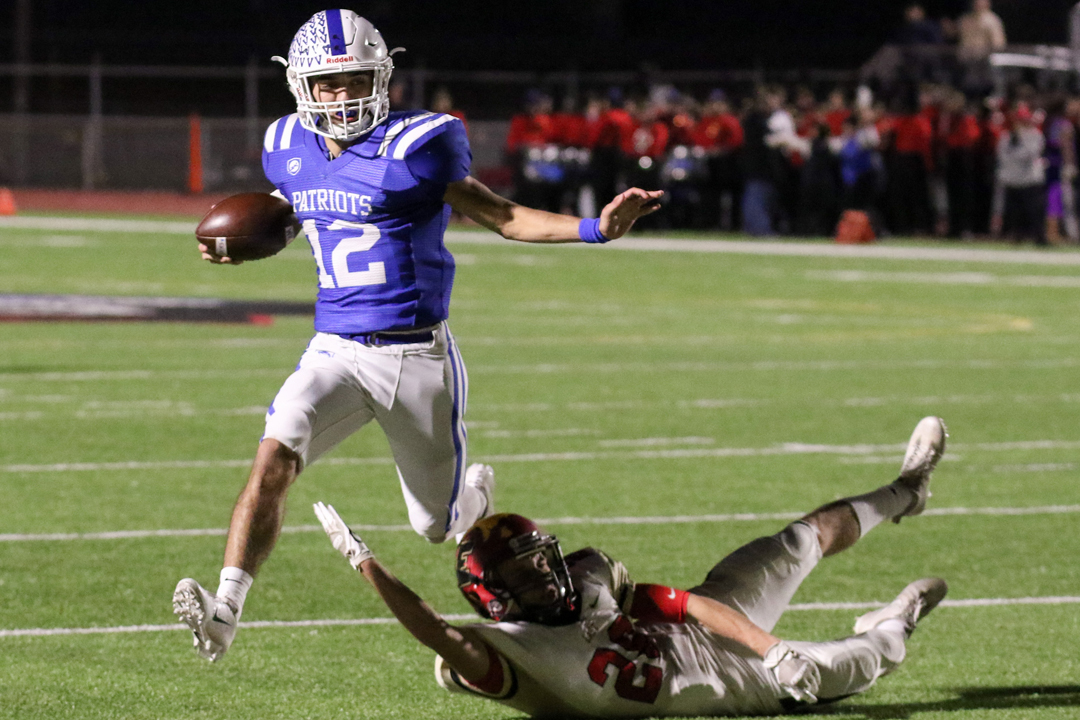 “It got everybody hyped,” Joey Garcia said of the early defensive stand. “It got us pumped up, we were confident. We weren’t going to stop, we were going to put our heads down and fight to the end.”

The Patriots’ landed another punch as quarterback Landry Gilpin got his team on the board with a 10-yard run to go up 7-0 and they’d never look back. He said the defense gave the team the spark they needed to come out hot.

Special teams chipped in as well as Mission Veterans’ defensive back Gus Garza returned a punt to the house from 70 yards out to make the score 14-0, then Gilpin found receiver Mikey Garcia on a 13-yard pass to extend the lead to 20-0.

Garza and Joey Garcia made it rough every snap for Victoria East’s quarterback Caleb Longoria as they came up with a sack and interception in the second quarter to squash any hopes the Titans had. The Patriots proceeded to score four more first half touchdowns on Gilpin passes to Ralph Ochoa (2 TD), Mikey Garcia (2 TD) and Leo Cantu (2 TD) to go into the locker room with a 48-14 lead.

“We have a lot of weapons everywhere; we’re deadly on both sides,” Garza said. “I think we can go far, I have faith in my team. We’ve worked hard to get to where we are right now.”

Coming out of the break, the Patriots defense made a goal line stand and forced another Victoria East turnover on downs. On the very next play, Gilpin exploded for a 96-yard touchdown run through the Titan defense to go up 55-14. One touchdown pass and a touchdown run by Jose Salinas later, the Patriots were in cruise control on their way to their 5th straight bi-district championship.

Head Coach David Gilpin said he was proud of his team’s dominant and complete performance.

“One of the best games that I’ve ever been a part of and I’ve been coaching 29 years,” Coach Gilpin said. “For us to come out and be able to beat a Victoria school with the type of athletes and type of size and speed that they have, it was really a good thing for our program.”

The Patriots will find out who their area round opponent is on Saturday as they take on the winner of Laredo Martin and San Antonio Veterans Memorial’s bi-district matchup.