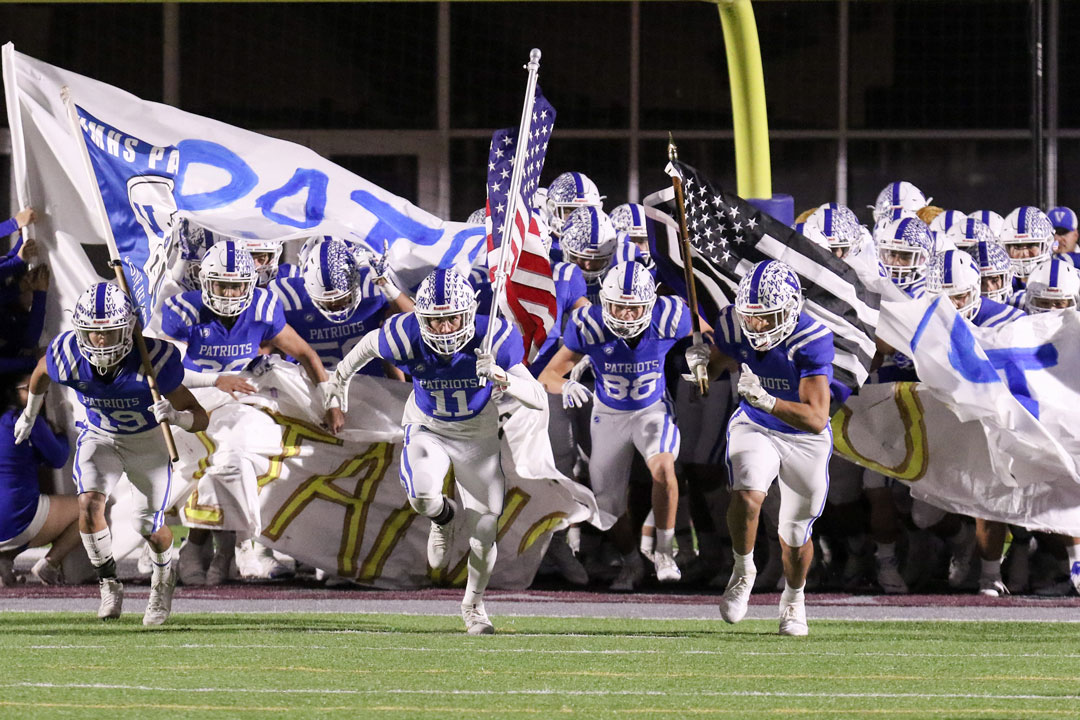 Mission Veterans won its 11th straight game of the year after a 48-23 beat down in the Battle of the Patriots last Saturday at Cabaniss Stadium in Corpus Christi to advance to the third round of the Class 5A Division I Playoffs.

“We’re Valley weak and that’s OK,” joked Head Coach David Gilpin after the win. “We understand the concept of Valley football, but I started telling you in February what this team is capable of. They talk about how Valley teams have a weakness of playing north of the checkpoint.

The Patriots eliminated any hopes San Antonio Veterans Memorial had as they stormed out to a 35-3 halftime lead on five touchdowns by quarterback Landry Gilpin, two of them to receiver Leo Cantu. Cantu also made a heads up play when he jumped on a loose ball in the end zone that was fumbled by AJ Gonzaque, who nearly had his second score of the night.

The Mission Veterans offense hasn’t scored less than 40 points in a game since Week One, and Cantu said the Patriots aren’t stopping anytime soon.

“As of right now, we’re on a roll and we’re not going to stop now,” Cantu said after his four-touchdown performance Saturday night. “We’ve been on the ball for a while and it starts at practice. Our coaching staff is one of the best in Texas, we have the athletes to do it and we just work hard every day. We feel unstoppable right now.”

Coach Gilpin feels the defense is peaking at the right time, allowing only 14 points to Victoria East in round one and nine points to S.A. Veterans Memorial before he was able to put the subs in.

Next up for the Patriots is a trip to the Alamodome for the Regional Semifinals where they’ll face another Veterans Memorial High School, their third of the year.

“We now have an opportunity to go up against Corpus Christi Vets, a team that’s supposed to be better than us,” said Coach Gilpin. “We’re a good football team, and that football team may get beat Saturday night, but I’ll tell you what, it won’t be without a fight. We may get through Saturday night and go play Wagner, and they may knock us out, but we won’t go out without a fight.”

Leading the fight for the Patriot defense is senior linebacker Joey Garcia, a captain who missed time with a shoulder injury earlier in the year, but is back wreaking havoc on opposing offenses. Garcia said he and his brothers are going to play every play like it’s their last as they live out one of their childhood dreams.

“The best part is playing with my brothers that I grew up with in middle school and at the Boys & Girls Club,” Garcia said. “We would always talk when we were small about going to play in the Alamodome, and now everything’s coming true.”

There will be a community pep rally for the Patriots at 6 p.m. Friday, Nov. 30 at the Mission Veterans Memorial High School Gym.