After lighting up scoreboards around the state of Texas for four years as a playmaker at Mission Veterans High School, Landry Gilpin has decided to take his game to the next level.

Surrounded by family, friends, coaches and teammates in the Mission Veterans Fieldhouse on Wednesday, Gilpin signed a letter of intent to play college football at Southwestern University in Georgetown, a place he felt was the right fit for him from his first visit. 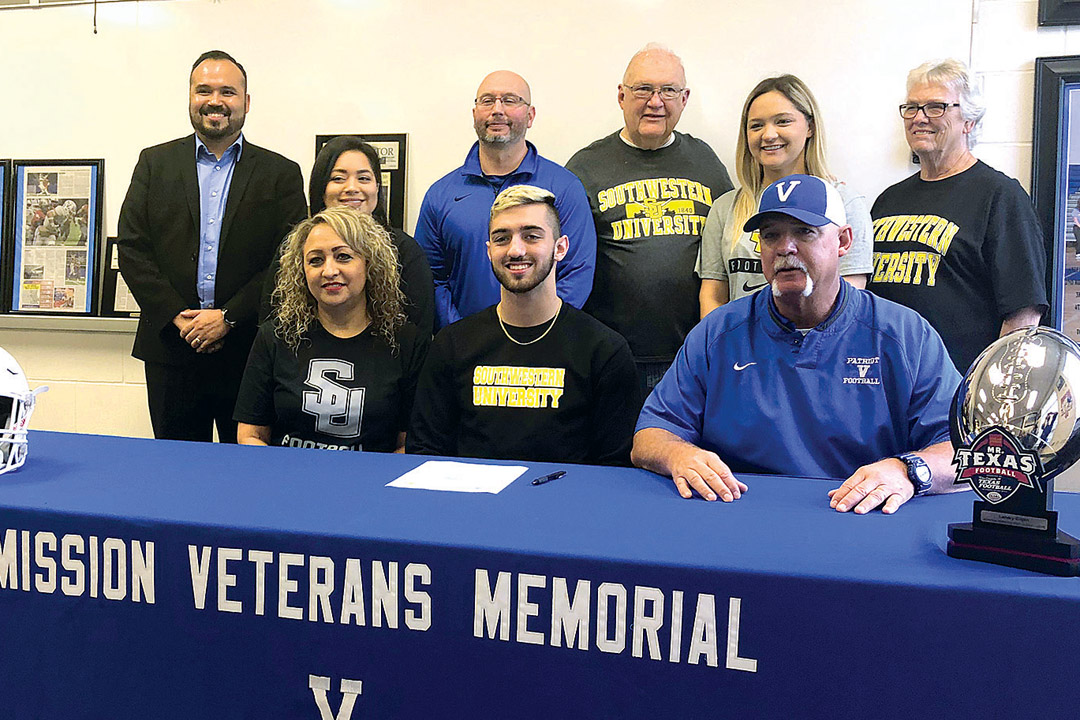 “When I had gone on my Southwestern visit, I was sold,” Gilpin said. “I told my parents I don’t want to go to anymore visits, this is where I want to be. We saw how competitive they were, not only in their conference, but we saw how prestigious they were in their academics, and that’s something you can’t pass up. That’s where I wanted to be.”

Southwestern plays in the American Southwest Conference, one of the most competitive at the Division III level, as the league also features Mary Hardin-Baylor and Hardin-Simmons.

“We think Landry made a tremendous choice as far as going to the next level,” said David Gilpin, Landry’s father and head coach for the past four years. “Southwestern’s offense is tailor-made for Landry to, in my words, dominate. I believe that you will see the same type of player at Southwestern University that you watched for four years at Mission Veterans. As soon as the coaching staff believes that he’s ready to take the field, whenever that may be, our plans are for him to go up there and compete from day one.”

Gilpin put together one of the best statistical seasons the state of Texas has ever seen in 2018 as the quarterback totaled 6,656 yards of total offense, 4,544 passing and 2,112 rushing. He also accounted for 82 total touchdowns and helped lead Mission Veterans to the fourth round of the playoffs for the first time in school history.

Landry’s decision didn’t just take football into account, either. Academics are just as much a priority for the no. 15 ranked student in Mission Veterans’ senior class.

While people have grown accustomed to calling Gilpin ‘Mr. Texas Football’ after he won the prestigious award in December, they could be calling him Dr. Gilpin in the near future as he plans to get his undergraduate degree in biology before hopefully joining a medical graduate program.

“I was really stressed out about the fact that I wasn’t going to go to a Division I,” said Landry. Everybody was asking me ‘what D-I’s are asking you, where are you going to go, are you going to go to a powerhouse, you were Mr. Texas are you going to do all these big things?’ That kind of put a little bit of pressure on me to make a decision that was for the people rather than for myself. Finally, I put that to the side and I said I’m going to do what I want to do for me, and to be able to go to a school that’s not only competitive in Division III, I’m also going to get a great education from a well respected school academically and that’s something I’m excited for.”

Southwestern is the oldest university in Texas, but the school disbanded their football team in 1951 due to budgetary constraints after rising to prominence during World War II. Finally, in 2011, SU’s board of trustees voted to reinstate the program to bring college football back to Georgetown.

Just as Landry Gilpin put Mission Veterans and the RGV on the map with a historic playoff run in 2018, he hopes to do the same for a Southwestern football program in its seventh season back in action.

“When they told me they had only been open for six years, I started immediately thinking about the impact I could make on the school,” said Landry. “With my competitive nature, I’m always hungry to go get whatever records are up there, so I’m obviously going to be trying to be the best teammate I can be, but I’m also going to keep in the back of my head to be the best player that’s been there. Whether it happens or not, I’m always going to be hungry for it and keep striving to do so.”

Coach Gilpin has spent the past four seasons and day after day before that with his son, so he knows just what he’s capable of doing for the Southwestern football program.

“This is the beginning, the excitement is there and I’ve been around Landry for 18 years, and I know when he sets his mind to accomplishing something, he does it,” said Coach Gilpin. “I believe with 100 percent certainty that he will go there and he is going to be a big part of what Southwestern football is all about and what they do over the next four years.”

Now that Landry Gilpin has made his long-awaited decision, he’s happy to call Southwestern University home and take on the next challenge in his life.