This article was originally published in the Progress Times issue dated Friday, March 8, 2019.

As a dispatcher for ADT, Becky Mingie was just doing her job: saving Bob Hensley’s life.

Several weeks ago Hensley, who lives at his residence on Fair Oaks Drive with his wife, Laurel McLeaish, was at home alone with their pets when a fire started. Because he was sleeping, the smoke detector in his house alerted him. 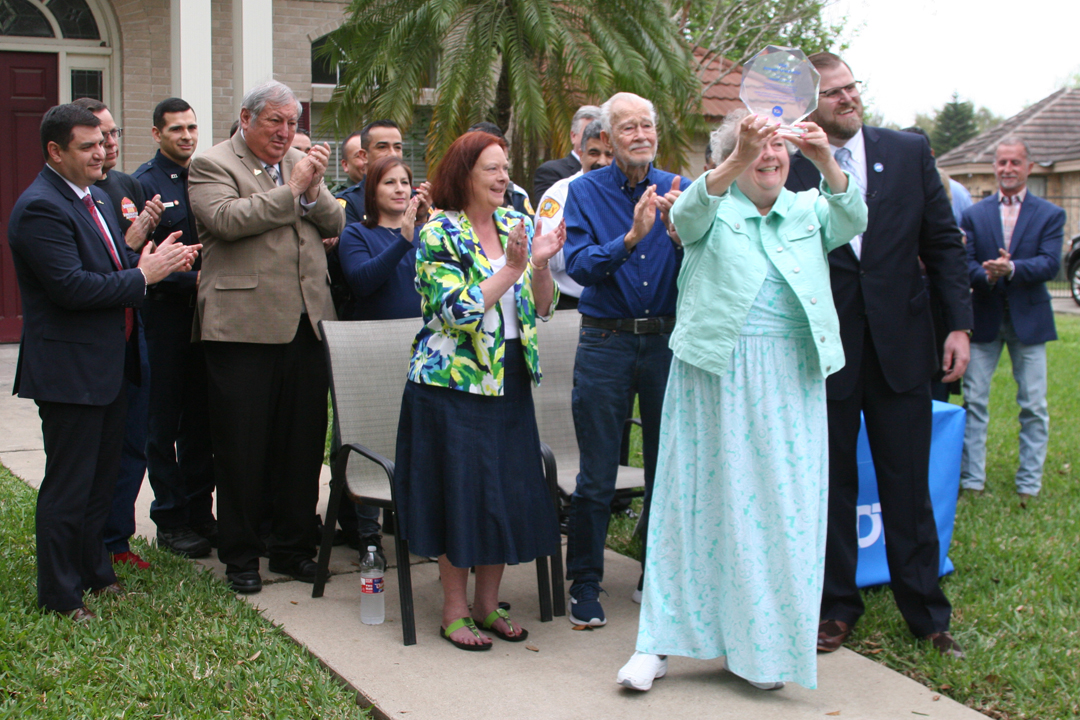 Unable to answer ADT Security Services, who was alerted of the fire, dispatcher Mingie called the local first responders for Hensley from a monitoring center in Knoxville, Tennessee. They promptly arrived on the scene and put out the fire, saving the home.

McLeaish was not home at the time, and Hensley was overcome with the amount of smoke filling his house. Four neighbors (the Garzas and the Overlys) heard the alarm and managed to get Hensley, their two dogs and one of their cats outside to safety before the fire department arrived on the scene.

“Tragedy was avoided due to the ADT alarm system doing its job,” Todd Dernberger, with ADT Security Services, said. “We’re all here today to celebrate that success.”
ADT, along with the Mission Fire Department, the Border Patrol and the United Services Automobile Association (USAA) all participated in a press conference last Friday. During the event, Hensley and McLeaish described their experience and expressed their gratitude for making it out during an emergency.

“Unfortunately, we did lose two cats,” McLeaish said. “But because of everything the firefighters did, they did save one of our cats and our two dogs. So we’re very thankful for that.”

Hensley said that because of the heavy smoke, he was so “out of it” he was “like a cheap drunk” who didn’t know where he was.

“The smoke overcame me and the alarm was going off, and the neighbors heard it,” Hensley said. “I never saw the flames, but the smoke I was breathing was poisonous.”

Dernberger said that Mingie’s calm handling of the situation made for a fast notification to the fire department.

“It lends power as to why it’s so important for monitored protection, for the alarm system inside the house,” Dernberger said. “It got somebody over here to help folks like Bob.”

Mingie was flown from Tennessee to meet Hensley and McLeaish for the first time in person during the press conference. She hugged both of them and was presented with an ADT Hero Award for her work.

Mingie said she was glad to meet the couple, and grateful to see Hensley doing well.

ADT also gave the neighbors an award for their speedy assistance in getting Hensley and their pets to safety during the fire.

“It’s not only about what the alarm system can do, it’s about what a great community can do,” Dernberger said.

The Mission Fire Department was presented with two $5,000 checks, one from ADT and one from USAA for their service to the residents of the city.

“When normally, people would flee from a burning building, they’re the first ones going in to pull someone out,” Dernberger said.

Fire Chief Gilbert Sanchez accepted the checks, and said the department would use the funds to purchase an additional industrial washing machine for their second station.

“As Fire Marshal for over 18 years, the importance of having these systems in place – not just in businesses, but residential – enhances the response time in these emergencies,” Sanchez said. “I’m very happy that this overall effort, starting from the dispatch all the way to the response time in the city and the community in this neighborhood, got Bob out.”