This article was originally published in the Friday, March 8 edition of the Life styles of the Rio Grande Valley, a supplement of the Progress Times.

The Winter Texan season begins around October and starts to wind down in April, ending a six to seven month streak of living every day like it’s Saturday down in Rio Grande Valley for Winter Texans.

Many frequent South Padre Island, which features a ton of entertainment options, including checking out the lively performances of Leslie Blasing, a singer who can nail any genre of music on stage. 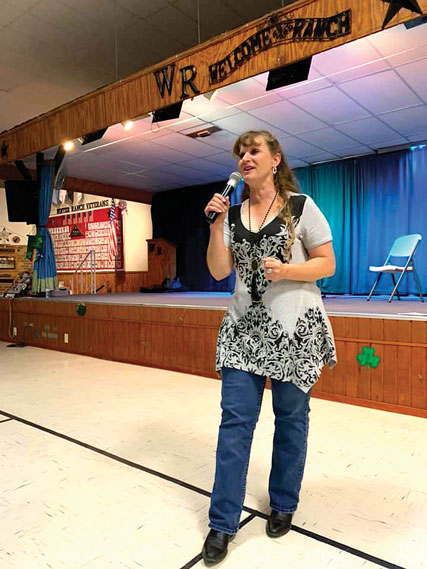 But once Winter Texan season is over and summer rolls around, people start heading home back up north, however, the fun doesn’t end there.

Leslie Blasing has started a tour in recent years which takes her from South Padre Island all the way up to Gimli, Manitoba, Canada with stops in between in Missouri, Oklahoma, Nebraska, Wisconsin and North Dakota, where she performs for fans who have returned home but want to share a taste of their SPI winters with their own communities.

“It is so totally different because they get so excited because they want their family, their friends and their community to hear me sing and see what kind of fun I have,” Blasing said. “The majority of people that I meet down here that are Winter Texans, they say that they really don’t dance when they’re back at home, they really don’t have fun like this, so when they’re here, every single day is a Saturday when they’re in the Rio Grande Valley. They say they’re exhausted when they go home, and they love to have that experience with their friends and family back at home, so when I come into town, it’s like they’re back on the island again.

The tour started with a wedding reception in Garman, Minnesota. Years back, a six-year-old visiting South Padre Island with her grandparents from Minnesota told Leslie she wanted Blasing to one day play at her wedding.

10 years went by, but the little girl didn’t forget. Then 16, she reminded Leslie and said she wasn’t joking, she was serious. Eight years after that, the little girl, now grown with a fiance, ran into Leslie on spring break on South Padre Island and made arrangements to fly her out to perform at her wedding in the farming town of Garman.

Leslie posted the date in Minnesota on her website and phone calls, emails, and text messages began pouring in as Winter Texans wanted her to stop by their town to perform along the way.

“It all started with a wedding reception in Minnesota, and all the Winter Texans finding out about it and wanting me then to play in their hometown,” she said.

Leslie’s summer tour does a lot of good as well as she donates proceeds to different charities in the different towns and cities she plays in. In Camdenton, Missouri, the money raised goes to help high school kids in need that surround the Lake of the Ozarks. In Rochester, Minnesota, Blasing sings at the VFW, giving back to Veterans of Foreign Wars, and in Watertown, Wisconsin, the money helps give trained custom canines to veterans in need of canine assistance.

So, the fun never stops for Winter Texans or Leslie Blasing. It goes full-circle and then the cycle of fun begins again once the fall rolls around.

“They’re hooting and hollering because it’s so much fun, and it takes the locals that haven’t experienced it yet a little time to warm up, but at the end of the two hours, they’re fired up like the rest of the Winter Texans doing conga lines and once they see everyone is having a great time, they fall right into it and become part of the fun,” Blasing said.